Intel: Why Turkey, Russia are not about to fall out over Idlib

Turkish President Recep Tayyip Erdogan is accusing the Syrian government of seeking to “sabotage” Turkey’s relations with Russia with its assault on rebel-held Idlib. 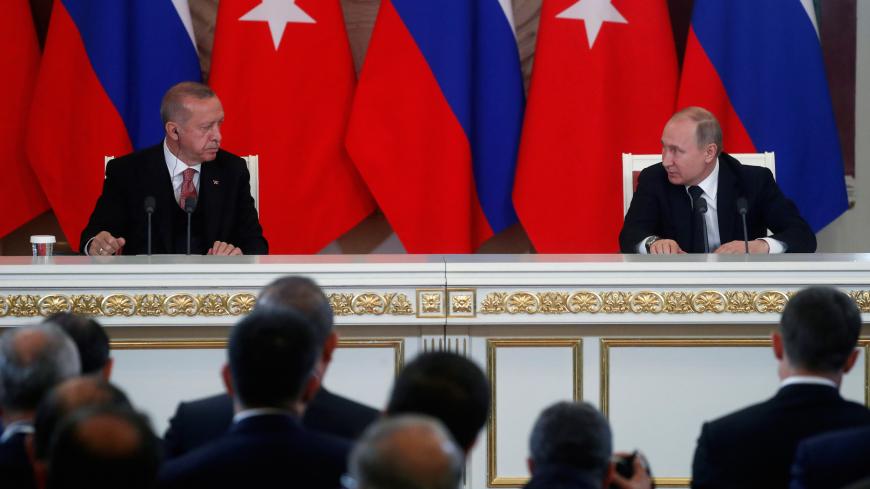 Turkish President Recep Tayyip Erdogan is accusing the Syrian government of seeking to “sabotage” Turkey’s relations with Russia with its assault on rebel-held Idlib. In a late-night phone call with Russian President Vladimir Putin on Monday, Erdogan said Syrian President Bashar al-Assad’s attack on the de-escalation zone guaranteed by Moscow and Ankara had reached an “alarming dimension” that cannot be justified with claims of fighting terrorism. With civilian targets, including hospitals, being hit, joint efforts to end the eight-year-long conflict are at risk.

Why it matters: Erdogan’s comments could be interpreted as a signal that the 2018 deal under which Turkey pledged to disarm and edge out Hayat Tahrir-al Sham, an al-Qaeda breakaway group, from areas around Idlib is falling apart.

Russia agreed in exchange to prevent the regime from mounting a full-scale assault on the province that is now home to 3 million civilians. The UN has warned that any such offensive would trigger a major humanitarian disaster and send an ocean of refugees, with jihadis among them, toward Turkey.

The onslaught began April 28 and has already displaced 150,000 people. Opposition forces say at least 169 civilians have died so far in a campaign preceded by days of intense Russian and Syrian regime airstrikes on northern Hama and southern Idlib.

Blaming Assad: Erdogan seems unlikely to break with Putin over the escalating violence. The Turkish leader has said nothing about Russia’s central role in the bloodletting, shifting all the blame on Assad instead.

The double standard was on full display in Istanbul today as Syrian protesters gathered outside the Russian Consulate. Those who chanted anti-Assad slogans were allowed to stay; those who took aim at Putin where shepherded away by police.

But Turkey has also held back on its response to Assad. Elizabeth Tsurkov, a research fellow with the Forum for Regional Thinking who specializes in Syria, said, “Turkey did not retaliate against repeated regime attacks on its [military] observation posts in Idlib and Hama.” She told Al-Monitor that Turkey also “continued to prevent rebel factions operating under its direct control in northern Aleppo from launching an offensive against the regime in that region,” which would have forced Assad’s forces to fight on two separate fronts.

As such, Ankara’s formal readout from the call to Putin appears to be aimed at proving to Erdogan’s base — and to Syrian Sunni rebels who helped Turkish forces invade mainly Kurdish Afrin last year — that Turkey still cares.

What’s next: This is probably not the “big one” but rather a limited offensive to pressure the rebels and Turkey into accepting less than they are asking for. “A strictly military solution,” Tsurkov said, “will mean massacres on a scale previously unseen in Syria and mass displacement into Turkey, which Turkey is determined to prevent.”

But there are few signs that Hayat Tahrir al-Sham will play ball. In a rare interview released Sunday, Hayat Tahrir al-Sham leader Abu Mohammed al-Julani told a local activist that the group was justified in its attacks against Russia’s Khmeimim air base. He urged all able-bodied men to take up the fight, but did not say anything threatening about Turkey. This suggest his lines of communication with Ankara remain open.

Know more: Read Shelly Kittleson on how the long-expected battle for Idlib may have begun and Kirill Semenov on whether the assault can facilitate a deal between Russia and Turkey.