The Russian president plans to roll out his regional initiative to calm Gulf tensions next month — but are the United States and the EU ready to let Putin step up in the Gulf? 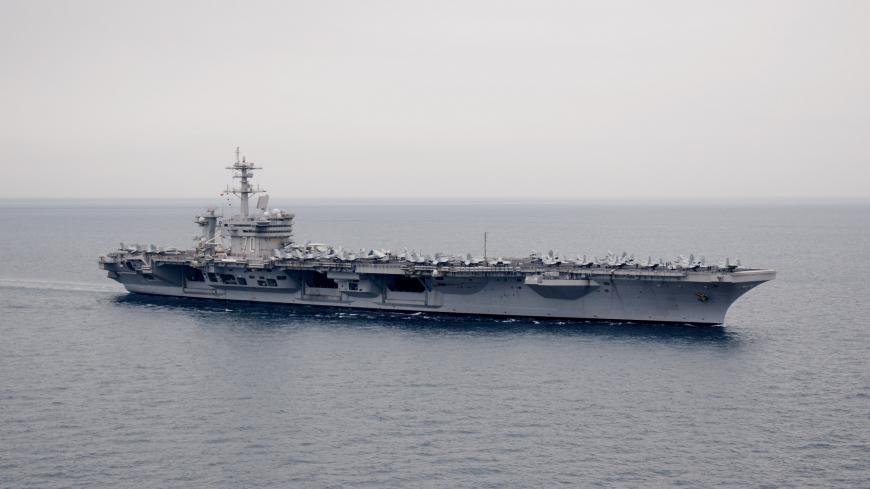 Russian President Vladimir Putin will announce his plan for Gulf security next month. It’s unclear how the Gulf countries will respond to his initiative, and whether the Trump administration and the EU will have any time for it. The proposal’s ambition is stark, and it seems at this point like a hard, if not impossible sell to many of the stakeholders — especially the United States. In trying to make the pitch, Putin may have an eye on American politics, hoping that US President Donald Trump might welcome a diplomatic track, even a long shot, which helps keeps the Gulf quiet during his 2020 reelection campaign.

In the midst of the escalating confrontation between the United States and Iran, Trump tweeted on June 24, "We don't even need to be there [in the Gulf]” because the United States was no longer dependent on Persian Gulf oil, asking, “Why are we protecting the shipping lanes for other countries (over many years) for zero compensation … All of these countries should be protecting their own ships on what has always been a dangerous journey."

This statement came as something of a stunner for the US partners in the Gulf, including and especially Saudi Arabia, the UAE and Bahrain, which count on their security ties with the United States and back the administration’s maximum pressure campaign on Iran.

Four days after his tweet, Trump and Putin met for 80 minutes at the G-20 Summit in Osaka. Russian Foreign Minister Sergey Lavrov said afterward that the presidents agreed on the need for a “diplomatic way out” of the crisis with Iran. Lavrov then referenced a Russian initiative to strengthen trust among Iran and the Arab Gulf states with the assistance of the UN Security Council.

"This is a very, very promising thing,” Lavrov said, “which is beginning to be perceived by all as a chance to establish a dialogue and prevent further escalation of tension, let alone the path of force in the development of events."

So much for Putin’s low profile in the Gulf

One month later, Russian Foreign Minister Mikhail Bogdanov formally presented "Russia’s security concept for the Gulf area," a seeming omnibus package of long-standing, if dusty, confidence building and Gulf security proposals, including counterterrorism cooperation, conflict resolution in Yemen and Syria, a region free of nuclear and chemical weapons, and even a call for a “democratic and prosperous Middle East that would encourage inter-faith peace and coexistence.”

“The central long-term objective,” according to the document, “is the creation of a security and cooperation organization in the Persian Gulf that would include, in addition to the Gulf countries, Russia, China, the USA, the EU, India and other stakeholders as observers or associated members.”

"Russia has kept a low profile as far as Gulf security is concerned,” Maxim Suchkov explains, “seeing the subregion as primarily American turf, it has nonetheless been meticulously forging its own network of regional relationships with an eye on placing itself at the center. Now it is stepping up the game with a collection of ideas reflective of both Russia’s own grievances with the United States and American policies that proved disastrous for the Mideast over recent decades.”

Rouhani: ‘All axes of power need to join hands’

The Russian initiative tracks closely with Iran Foreign Minister Mohammad Javad Zarif’s proposal for a “Regional Dialogue Forum in the Persian Gulf,” described in an op-ed in the Financial Times last year.

Iran President Hassan Rouhani said on Aug. 14 that Iran “is ready to ensure the security of the historical region alongside its littoral states, as it has done so throughout the history. … To settle a regional and international problem, all axes of power need to join hands.” Rouhani also referred to the “unity among all bodies for ending the Iran-Iraq war,” which, via UN Security Council Resolution 598, references the role of the “UN Secretary-General” in advancing a plan for regional security.

And there are signs that there may be a new pulse for regional diplomacy with Iran.

Back in May, well-connected foreign policy veterans Hossein Mousavian, from Iran, and Abdulaziz Sager, from Saudi Arabia, wrote about the need and potential for an Iran-Saudi dialogue in a New York Times op-ed.

Oman, which was instrumental in the back channel diplomacy leading to the Iran nuclear deal, has denied playing a “mediating” role, but there is a caveat. "We are not mediating, but what we are more concerned with, in this case, is securing the stability of navigation in the Hormuz Strait, so we are in contact with all parties," Oman Foreign Minister Yusuf bin Alawi bin Abdullah said after meeting with Iranian officials in Tehran last month.

Much has been made of a meeting in Tehran between Iranian and Emirati Coast Guard officials this month, and that the UAE refrained from blaming Iran for the mining of ships in the Gulf in June, as reported by Liz Sly in the Washington Post. While Abu Dhabi will continue to give top billing to its partnership with Washington, it is also understandable that the UAE would take note, and perhaps test, a nascent regional diplomatic trend that could have consequences for its interests and security. All the states of the region know there is no status quo to latch on to in perpetuity; the changes can come fast, and with consequence. The UAE retrenchment on Yemen, for example, has been in the works for a while, and is hardly a retreat, as Abu Dhabi’s position is all about securing its own vital interests and influence in the country, as Ammar al-Ashwal reports.

The Trump administration’s approach to the region centers on the International Maritime Security Construct (IMSC) increasing “surveillance of and security in key waterways in the Middle East,” according to a statement from US Deputy Assistant Secretary of Defense Michael Mulroy.

So far the United Kingdom has signed up to the IMSC, and Israel has expressed interest (sparking condemnation from Iran). A comparable European initiative, which until now has not directly aligned itself with the US effort, has struggled to gather momentum, as Jack Detsch reports.

“While we have received some support to the freedom of navigation efforts, discussions are ongoing with additional partners and allies on what contributions they can make to promote greater peace and security,” according to the statement. US Secretary of State Mike Pompeo, who will address the UN Security Council on Iran on Aug. 20, said he is “very confident” that the United States will build support for the IMSC initiative.

Putin’s long-shot pitch may have a fallback

Putin is expected to roll out his Gulf security plan on or around Sept. 20, at the annual Valdai International Discussion Club, held in Sochi. Putin is counting on Iran, and while Tehran has not yet formally embraced the initiative, it is discussing it. Rouhani may have questions about Putin’s endgame, especially whether Putin can deliver the United States, the EU, the Security Council and the Arab Gulf states. But Rouhani also needs Putin, probably his most important ally, given the US maximum pressure policy, and especially if events overall take a turn for the worse. The Russian approach also tracks well with Zarif’s earlier proposal and, given the intensive regional diplomacy, it’s hard not to see Tehran as an eventual partner, or at least a fellow traveler, in Putin’s bid, assuming it goes ahead.

It’s hard to envision the United States offering or allowing Putin a seat at the head of a conference table dealing with Gulf security, especially given the present US approach to the region. A US official, speaking off the record, was skeptical about the proposal, saying, “Russia is never helpful” in these types of initiatives. The EU reaction is likely to be cautious at best. As we wrote here in June, the UAE and Saudi Arabia will likely take their cue from Washington.

Putin may consider a personal pitch to Trump, picking up on their meeting in Osaka, saying that his is the best bet for diplomacy with Iran (which Trump has called for), and that a diplomatic track could also help keep the Gulf quiet during the 2020 election campaign.

But if Trump doesn’t bite, the United States dismisses the Russian plan, the EU keeps its distance, and there is no meaningful action at the Security Council, then Putin’s fallback might be to carry on nonetheless. He might believe his is ultimately the only meaningful diplomatic channel; his stock rises, even if incrementally, simply by playing on traditionally American turf; and the Gulf states, and maybe even the United States and the EU, might eventually come around to avoid an unwanted crisis and conflict.