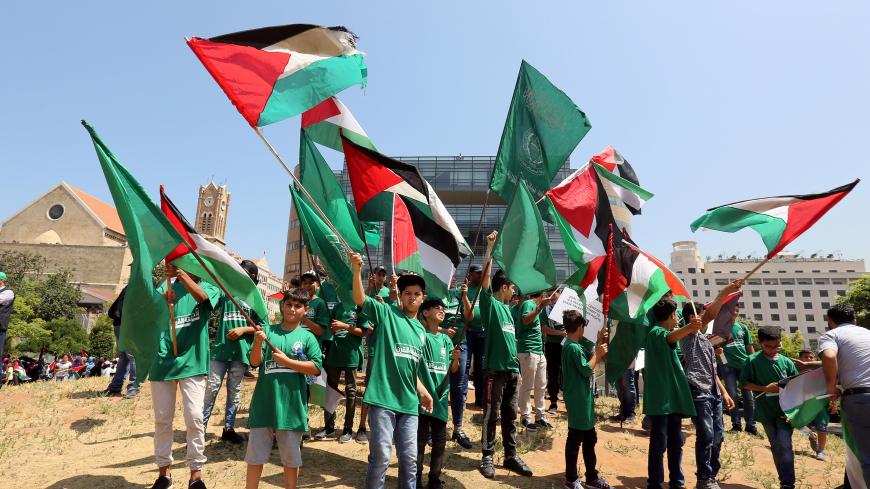 Demonstrators hold Palestinian flags as they take part in a protest against Bahrain's conference about US President Donald Trump's vision for Middle East peace, also called the deal of the century, in front of UN offices in Beirut, June 25, 2019. - REUTERS/Aziz Taher

GAZA CITY, Gaza Strip — Hamas leader Khalil al-Haya said in a statement Aug. 6 that Hamas had launched a donation campaign in the Gaza Strip to support Palestinian refugees in Lebanon and collected $100,000 from Gaza’s inhabitants.

He said the money will soon be sent to Lebanon and praised Gaza’s citizens for being generous and loyal to their roots despite the blockade and tough circumstances. Haya also said Hamas is launching a campaign to support the inhabitants of Wadi al-Homs in East Jerusalem after Israel destroyed 100 apartments there in July.

While some Gazans praised the campaign to help Palestinian refugees in Lebanon, others wondered about its timing given the tough circumstances Gaza residents are living under. Some residents said that the Gaza Strip should be the priority when it comes to support campaigns and that Hamas should alleviate citizens’ suffering first and foremost.

Hamas spokesman Hazem Qassem told Al-Monitor that Hamas’ main aim behind the campaign was to show Palestinian unity all over the world and to keep the issues of Palestinian refugees, especially in Lebanon after recent measures pertaining to foreign workers were taken.

Lebanese Labor Minister Camille Abu Suleiman recently launched a plan to control illegal foreign labor to protect the Lebanese workforce, carry out labor laws and promote social security. The plan affected Palestinian refugees who work in Lebanon and triggered a wave of protests from Palestinians in Lebanon angered by the measures. Palestinians said the plan was in collusion with the so-called US deal of the century for the Middle East. Palestinian groups said Palestinian laborers should not be persecuted and should be considered as an exception as they did not come to Lebanon voluntarily and cannot return to their country.

On July 29, at the request of Lebanese Prime Minister Saad Hariri, Abu Suleiman had called for a meeting with the representatives of Palestinian refugees in Lebanon to discuss the plan. These Palestinian representatives refused to attend the meeting. They said they did not obtain any prior promises that the plan would not be applied to Palestinian workers. At its Aug. 10 meeting, the Lebanese Cabinet decided to suspend the work permit plan for Palestinian refugees, and discussed ways to stop the labor minister from following up on his actions, to the dismay of Abu Suleiman, who was absent from the meeting.

Qassem said that collecting donations for Wadi Homs falls within the same context as the Lebanon case in the sense that Hamas wants the Palestinian cause to remain present in public opinion and in people’s hearts in a bid to maintain solidarity with this cause. He said the money that was collected reflects Palestinians’ authenticity and their solidarity with each other amid the tough economic crisis and the huge recession in the Gaza Strip under the Israeli blockade.

Qassem said Hamas managed to collect this sum of money within a few days thanks to its relief work committees that oversaw the campaign and that will send the money to Lebanon. He did not mention how the money will be sent.

“The importance of the money collected stems from its symbolism rather than its real value,” he said.

He added, “The campaign carries a message of defiance for the Israeli government, which is fighting the Gaza Strip and imposing a tight blockade on it. Despite the crackdown, Gazans are capable of supporting any Palestinian under threat.”

Madhoun said the quick public response to the campaign was symbolic and showed Gaza citizens’ support for Hamas and its militancy to ward off threats to Palestinians.

He noted that the Gaza Strip, a main target and at the forefront of confrontations with Israel, sought to underline its readiness to support Palestinians in Jerusalem and the diaspora, as it considers itself the core of the Palestinian cause. He said the campaign carries more of a political than an economic message and said Hamas should have launched a similar campaign to support the resilience of Gaza’s poor citizens.

Madhoun said Palestinian camps in Lebanon warmly welcomed the campaign, which had a positive impact on refugees’ psychological state.

Like Qassem, Habib said the money Gazans collected had a more symbolic rather than financial value, as everyone knows the tough economic situation in the Gaza Strip.

He also said Hamas wanted to send a political message about the level of its power in Gaza. “Hamas wanted to prove its ability to take decisions, even financial ones, despite constant talk about its tragic and deplorable state due to the blockade,” he said.

He said Hamas, in addition to backing Palestinians’ resilience in Lebanese camps, should also support Gazans’ resilience in the Gaza Strip by lifting taxes and additional customs imposed on Gazans, as they are worsening their economic suffering. “Hamas does not have to launch a similar donation campaign for Gaza from its own citizens,” he said.

Habib said the campaign to help Palestinians in Lebanon only shows that Gazans financially and morally support Palestinian refugees in Lebanese camps and does not spare the need for the Arab and international community to launch similar campaigns to aid Gaza’s citizens.