A campaign demanding transparency in aid delivery is gaining traction in Yemen, where a humanitarian crisis threatens millions. 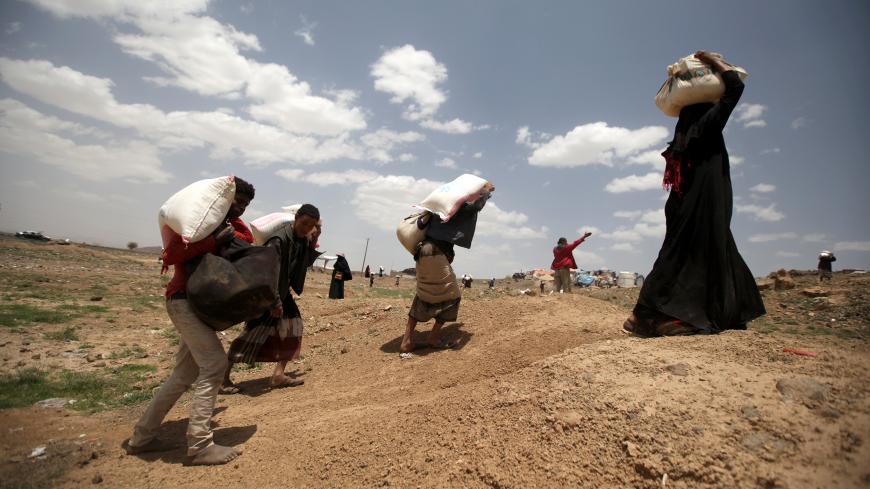 People carry food aid received from the local charity, Mona Relief, ahead of the holy month of Ramadan on the outskirts of Sanaa, Yemen, May 5, 2019. - REUTERS/Khaled Abdullah

SANAA — Several human rights activists in Yemen have launched an online campaign to demand transparency, including the publication of financial statements by aid organizations to show how they are distributing the aid they receive for Yemen. The "Where is the money" campaign has been active for a month, and activists say it will continue until its goal is reached.

The move came after Reem al-Hashimi, the United Arab Emirates' minister of state for international cooperation, announced at an April 8 press conference that his government and Saudi Arabia had to date provided more than $18 billion worth of aid to Yemen.

At a February donor conference for Yemen in Geneva, UN Secretary-General Antonio Guterres had said that donors had increased their contributions by 30% compared to the last year. According to him, “The largest increases came from Saudi Arabia and the UAE.”

How, then, is the aid failing to benefit Yemenis in need?

Qassem Mansour was displaced from Hajjah governorate and now lives with his wife and three of their children in the Darwan refugee camp near the capital Sanaa.

“We received aid as soon as we reached the camp, but this aid only covered our needs for two months,” Qassem told Al-Monitor. “People from several organizations visited us and asked us our names and details, but they never come back.”

Families in dire need of food and medicine are a dime a dozen in Yemen amid a humanitarian crisis the United Nations calls unprecedented. Yemeni President Abed Rabbo Mansour Hadi and his team are far away, having decamped to Riyadh at the beginning of the war.

“The country with the biggest problem in 2019 is going to be Yemen,” predicted UN emergency relief coordinator Mark Lowcock at a conference in Geneva last December. He warned that 75% of the country’s population — 24 million people — will likely need assistance in 2019.

Fidaa Yahya, one of the organizers of the transparency campaign, told Al-Monitor, “Yemen received more than $23 billion in aid up until 2019, and there are donor countries that pledged more than $2 billion during the last Geneva conference, held in February. Very few people are benefiting, however, from these funds. We find that most of the organizations in Yemen operate free from any government supervision. This prompted us to launch this campaign and call on all organizations working in Yemen to publish their financial reports.”

Yahya added, “As part of the campaign, more than 2,000 emails have been sent to more than 100 organizations operating in Yemen.” Most of them urge the organizations to publish their financial statements. So far, there have been no official or unofficial responses from either government agencies or private organizations.

A source at the World Food Programme in Yemen who agreed to speak to Al-Monitor on condition of anonymity remarked, “The lack of [response], especially on the part of large international organizations, is due to the fact that their financial system is very transparent and scrutinized by donors. Some imbalances may have been caused by local partners, but I don’t think such imbalances are as major as the campaign envisions.”

Abdul Wahid al-Awbali, another campaign organizer, told Al-Monitor, “Many organizations are in a state of confusion and argue that they are not obliged to respond. … These organizations believe that the campaign should address its questions to the government instead.”

Awbali went on, “If the Yemenis had a government in control of developments on the ground and the state institutions, we would not have needed such a campaign to begin with. There is currently exploitation of the divisions and absence of the state. [The government] is about to replicate the experience of Somalia, which received $55 billion from the world since 1991 but keeps getting poorer by the day, though such a sum could build another Somalia.”

Asked about future steps the campaign organizers plan to take, Awbali said, “More than 100 people from various disciplines have joined the campaign. In the near future, the campaign activists based abroad will meet with officials from donor countries in Berlin, Paris, Geneva and New York. There is also a team of lawyers working with the campaign to contact government agencies in Yemen. A lot of other escalatory steps will also be taken.”

The campaign's hashtag, #whereisthemoney, is spreading as its message resonates with Yemenis. Their suffering is increasing by the day as the war rages into its fifth year.

According to an April report by the United Nations Development Programme, the ongoing conflict in Yemen has already set the country back 20 years. Among the devastating consequences are the deaths of about 250,000 people directly from the violence or due to the lack of food and health care.