No light at end of tunnel for Yemen’s economy

The Yemeni government and central bank are unable to solve the unpaid salaries crisis of government employees amid an economic crisis that has left devastating humanitarian conditions in the war-torn country. 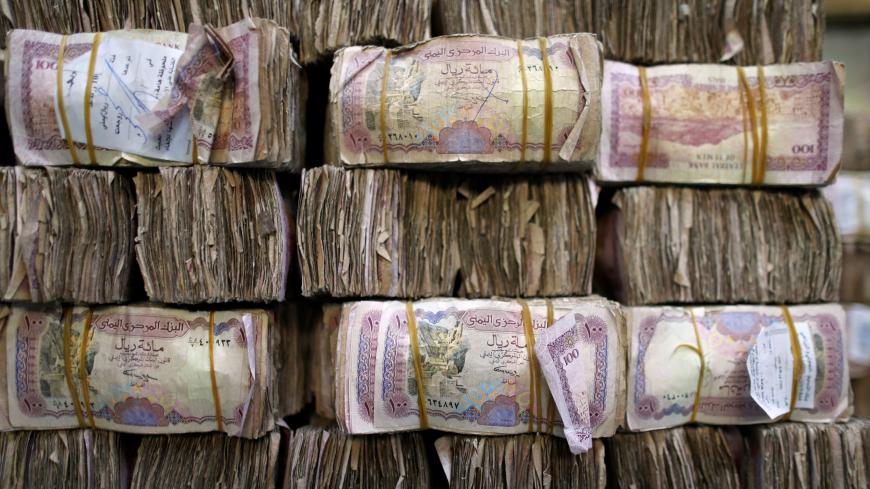 Bundles of Yemeni currency are pictured at a post office before being handed to public sector employees as salaries in Sanaa, Yemen, Jan. 25, 2017. - REUTERS/Khaled Abdullah

SANAA, Yemen — Hassan walks about one mile each day to get to his new job as a private security guard, to save on transportation costs. He barely makes $100 each month. The 42-year-old used to be a departmental director in the Ministry of Electricity and Energy, but the war has led to massive power outages in the country and he lost his job after much of the ministry’s work was halted.

"I try to provide my family with the minimum food needs with my job," he told Al-Monitor. "Our situation has changed since the war broke out; our salaries have been suspended for more than a year, and I am spending all my savings and selling what I can. Five months ago I left my apartment in downtown Sanaa because of accumulated rent due. I now live with my wife and child in a room at my parents’ old house."

More than 1.2 million government employees have found themselves in a similar situation since their salaries were suspended 14 months ago.

The financial impact varies per person due to the economic conflict between the internationally recognized government in Aden and the Houthi government in Sanaa. The Central Bank of Yemen was moved to Aden on Sept. 18, 2016, and the government there stopped paying the salaries of employees in Houthi-controlled areas. The government wants the revenues of state institutions in those areas — such as customs taxes and the revenues of al-Hodeidah port under the Houthi control — to be transferred to the central bank. But the Houthis are still refusing this demand.

According to a report by the Ministry of Planning and International Cooperation, gross domestic product dropped by 41.8% since the beginning of the conflict.

Mustafa Nasser, the head of the Economic Media Center, an independent center specialized in economic studies and set up jointly with the World Bank and international organizations, told Al-Monitor, “The unpaid salaries are a key reason behind the economic collapse in Yemen. If the crisis continues, millions of people will starve and economic activity will be paralyzed. Employees are the main economic and financial element in Yemen.”

The United Nations has repeatedly said that the salary halt exacerbated the economic crisis and eradicated food security, but no breakthrough has been recorded to solve the problem. In January, UN Undersecretary for Humanitarian Affairs and Emergency Relief Mark Lowcock expressed in a press statement deep concern about the deteriorating humanitarian and economic situations in Yemen.

Lowcock said that 22.2 million people need humanitarian relief in Yemen, and that this figure is unprecedented and has jumped by 3.4 million since 2017.

The UN estimates the civilian death toll at more than 5,200 since the start of the war in March 2015.

On Oct. 18, UNICEF Regional Director for the Middle East and North Africa Khairat Kabalari said in a statement that after 2½ years of conflict the education of 4.5 million Yemeni children is on the line. Three-quarters of teachers have not been paid since October 2016.

Ahmad Shamakh, an economic expert at the Yemeni Shura Council, told Al-Monitor, “The crisis of suspended salaries has worsened the economic situation and the central bank is obviously slackening in its work. If it weren’t for the transfers by the Yemeni diaspora to the country, the dollar rate would have exceeded 750 Yemeni riyals.”

The UN International Fund for Agricultural Development issued a report Feb. 26 indicating that money transfers in Yemen reached $3.4 billion in 2016, a slight increase from $3.35 billion in 2015, continuing a trend of increased transfers amid the war.

Sociologist at the Ministry of Higher Education and Scientific Research Khaled Qassem said that the salary suspension has worsened poverty and has deprived millions of children of education and social security. He told Al-Monitor, “The repercussions are multiplying. The situation is not only affecting the nuclear family but also the extended one. The disputing parties are taking advantage of people’s financial needs to recruit militants, especially children.”

Nasser said that solving the issue of salaries is linked to a political solution. He noted, “Pressing solutions might be adopted through an initiative led by the Central Bank of Yemen, in cooperation with the UN and all concerned Yemeni parties to ensure paying the salaries of all employees.”

He added, “All amounts collected by the Houthis — including customs and taxes — must be handed over to the central bank branches in all Yemeni areas, and a settlement between the Houthis and the internationally recognized government must be reached in case of shortage.”

Shamakh said, "Urgent economic decisions should be taken to solve the imbalance, improve the state’s financial resources, increase production in promising sectors, activate the role of the central bank and its tools, control the black market and shut down the black markets in Houthi areas. This would improve the state’s financial resources and bridge the gap between income and expenditure and lead to paying salaries."

Facing such tough humanitarian conditions and war repercussions, the disputing parties keep blaming each other and voicing conflicting stances. Meanwhile, UN institutions continue to send out warnings and international stances without taking actual action to put an end to this humanitarian catastrophe weighing down millions of helpless Yemeni citizens.