The majority of Yemeni society bears the consequences and stands alone, unable to confront the ravages of war, division and the ongoing economic deterioration. 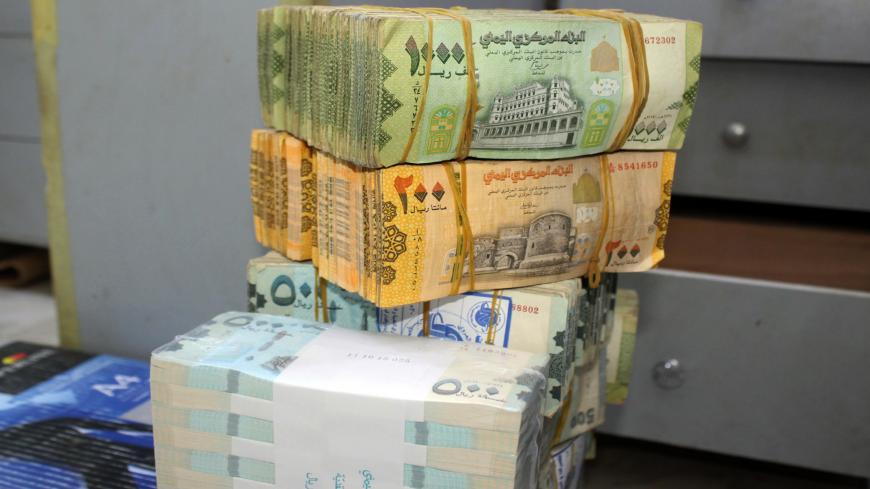 Over the past month, the Yemeni rial has declined against foreign currencies to the lowest rate since the war began in March 2015, registering 800 rials to the US dollar, amid international warnings of further declines.

This was clearly expressed by Undersecretary General for Humanitarian Affairs Mark Lowcock in his briefing to the United Nations Security Council on Yemen June 24, warning of Yemen "falling off the cliff."

“We have never before seen in Yemen a situation where such a severe acute domestic economic crisis overlaps with a sharp drop in remittances and major cuts to donor support for humanitarian aid — and this, of course, is all happening in the middle of a devastating pandemic,” Lowcock said, noting that the value of the rial has plummeted and food prices have risen between 10% and 20% in some areas just in the last two weeks.

On June 2, the UN and Saudi Arabia hosted a virtual donor conference for Yemen, during which donor countries pledged $1.35 billion to help humanitarian agencies continue to provide basic and emergency services, including funding for coronavirus containment programs.

During his speech at the conference, UN Secretary-General Antonio Guterres called on all parties in Yemen to cooperate with special envoy Martin Griffiths to achieve progress in negotiations on the economic and humanitarian levels in order to alleviate the people’s suffering, explaining that the number of civilian casualties increases every month, with over 500 people killed or injured since January.

Speaking about the most important causes of the economic deterioration, Mustafa Nasr, head of the Studies and Economic Media Center — which was based in Sanaa before the war, but now has branches in Taiz and Aden — told Al-Monitor, “The devaluation of the Yemeni rial against foreign currencies is catastrophic, especially since it dropped by 12% during the first five months [of 2020], and could drop even more. The main causes of this are the ongoing military and political conflict, which coincided with a speculative [attack] on the hard currency by prominent [traders] in the market. Not to mention the impact of [the virus that causes] COVID-19 and printing quantities of new currency notes, all of which have contributed to this alarming plunge.”

Meanwhile, Ahmed Said Shamakh, a financial expert and member of the Houthi-affiliated Shura Council, held Saudi Arabia, which is leading the coalition fighting Houthis in Yemen, responsible for the devaluation of the currency and the deterioration of the economy in Yemen.

“Yemen has been undergoing a series of disasters for years, targeting it at various levels, with many tools, be it military or not. Hitting the economy is one of the most prominent tools of war that Saudi Arabia and its allies have been using since the war began,” Shamakh told Al-Monitor.

He added, “Economic indicators have declined, collapse is never-ending, and our economic growth is negative. This is the outcome of everything that Saudi Arabia and its allies are seeking to achieve in order to win the battle.”

The division that occurred in Yemen as a result of the war reflected on the economic situation, as the legitimate government had in September 2016 moved the Central Bank to Aden, the city that it now takes as its temporary capital.

In response, the Houthis, as a de facto authority in Sanaa and their areas of control, issued a decision in December 2019 to prohibit the circulation of any new banknotes printed by the legitimate government, and only deal with previously printed banknotes.

This is how Yemen started having a divided economic system, further exacerbating the situation.

In light of all this, most Yemenis are still the ones bearing the consequences and standing alone, unable to confront the ravages of war, division and the ongoing economic deterioration.

Yemeni economic analyst Abd al-Wahid al-Oubali told Al-Monitor that years of war have formed a so-called war economy, to which various parties contribute, by depriving the banking system of its functions and printing banknotes outside its framework, which facilitates corrupt deals at various levels.

He added, “The economy could never recover as long as the main revenues from selling oil derivatives and the expatriate transfers — estimated by the World Bank at $3.7 billion annually — as well as the aid provided by donors, do not make it to the Central Bank [in Aden] and the Yemeni economy does not benefit from them as for foreign currency cash.”

Speaking about the urgently needed solution to reduce or stop the deterioration and collapse, Nasr noted that UN and international pressure to stop the war should first be exerted, in addition to forcing the conflicting parties to reach real peace in order for the Yemeni state to return and have control over all resources, according to the rules of the constitution and international conventions.

He noted, “The country urgently needs an independent and unified economic administration to manage the economy and the Central Bank through unified measures, without any of the current division.”

Nasr added, “The coalition countries must quickly provide direct support to the Central Bank in the form of cash contribution deposits to reduce devaluation, in addition to starting reconstruction in Yemen, which is what the donor countries must provide and do, especially since the country is suffering under the largest humanitarian crisis in the world.”

Oubali also spoke about solutions, saying, “First and foremost, the banking system and its function need to be restored so that the Central Bank of Yemen becomes the sole controller of all revenues and expenditures. We also need to reactivate the oil refineries in Aden and the Marib gas [turbine] station to produce electricity [which are closed due to the war]. Expats should only transfer money through banks, not the black market, and a legal systematic process needs to be employed in order to address existing corruption and hold accountable those proven to be involved.”

He added, “We need to work on urgent austerity measures as well, perhaps the first of which is a comprehensive structuring of institutions, as well as reducing the number of ministries and embassies, minimizing expenditures and issuing a decision to pay the salaries of the leaders and ministers of the legitimate government in Yemeni rials, not in hard currency anymore.”