Yemenis continue to bear the brunt of the war, including a devastated economy and banknotes that may have no value depending on which part of the country they visit. 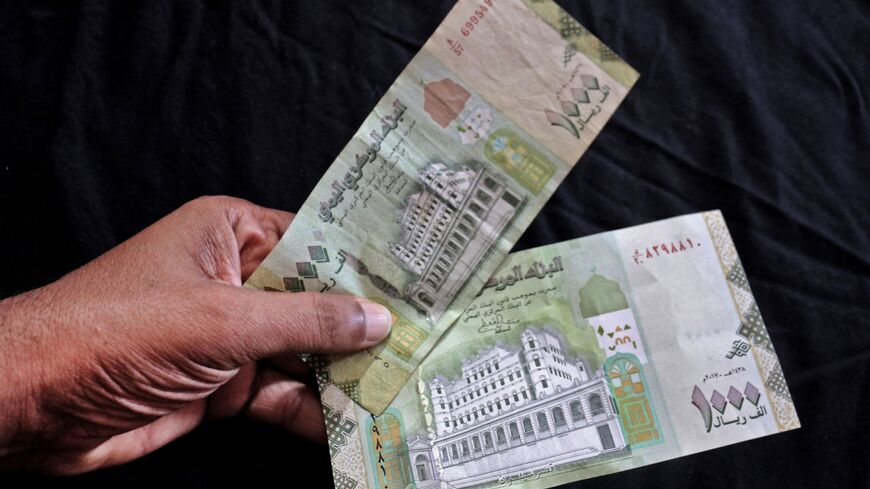 A man holds (bottom to top) new and older issues of the 1,000 Yemeni Riyal banknote of the Yemeni currency, in the southern port city of Aden on Aug. 17, 2021. Alongside a grinding seven-year military conflict, Yemen's government and the Houthi rebels are locked in battle on another front, a currency war that has opened up a gulf in riyal values. - SALEH AL-OBEIDI/AFP via Getty Images

A national currency has the same value nationwide, but in Yemen, that is no longer the case. The currency has different values depending on the banknote's date of printing, its color and design. Such a reality is one of several ordeals created by the war.

Over the last four years, the UN-recognized government has printed currency that altered the look and color of the Yemeni rial banknotes. Such a move has invited daily hurdles for civilians in Yemen, particularly after the Houthis banned the freshly printed bills.

A Yemeni traveling from the south to the north needs to be ready with the Houthi-approved banknotes or a hard currency such as the US dollar or the Saudi rial. With the government-printed money, nothing can be bought in Houthi-run areas.

Mohammed Naji, a 28-year-old university student, lately arrived in Aden. He had been abroad for five years. Upon exiting the Airport, he exchanged $100 to cover the expenses during his one-night stay in Aden.

He took a bus to Sanaa the next day, where his family resides. On the way to his destination, he learned that the banknotes he received from Aden were equal to nothing in the first Houthi-held area he reached.

Naji told Al-Monitor, "When I arrived in Houthi areas in Taiz, I could not buy even a water bottle with the government-printed money. It was as if I had entered another country. I offered the banknotes to four shops, and they all turned them down."

One option was to give US dollars for Houthi-approved bills, which he did. "I exchanged $50, and I got YR30,000. All the banknotes were old and are considered valid in Houthi-run territories."

Naji is one of countless Yemenis who daily face the trouble of the exchange rate divergence. It reflects the country's deep fragmentation and the warring sides' failure to distance the national currency from politics and conflict after the Houthi group ousted the UN-recognized government.

Ali Ahmed, a 42-year-old from Aden, often visits his relatives in Sanaa, and he is aware that the Yemeni banknotes spent in Aden cannot be accepted in Sanaa. Speaking to Al-Monitor, he said, "Personally, when I travel from Aden to Sanaa, I carry Houthi-approved notes, and when I return to Aden, I use the government-printed money. This is a sad reality, and it has to be told to the world."

Ahmed added, "I understand that the weapons used in Yemen's war can harm some people, but the falling currency affects almost every family. As I see people die of bombing, I also see them die of hunger and lack of medicine."

In 2016, the internationally recognized government relocated the operations of the Central Bank of Yemen from Sanaa to Aden, a move that worsened economic troubles including inflation, unpaid salaries, and currency devaluation.

While the UN has been trying to push the warring sides to agree to a political resolution to the conflict, the international body has also proposed initiatives, including Stockholm Agreement, to help address the economic crisis in the country. Thus far, all attempts have hit a dead end, and the UN describes Yemen as the world's largest humanitarian crisis.

An economist in Houthi-dominated Sanaa, who wishes to remain anonymous, told Al-Monitor that Yemen's warring sides have miserably failed to prevent the currency's fall or agree on specific procedures to help the economy.

He added, "The Houthi group and the Yemeni government should have maintained the neutrality of the Central Bank. Unfortunately, they employed the financial institutions in the country to serve their purposes."

The economist reckoned that the better remedy for the Yemeni currency is a collective economic policy by the Houthis and the Yemeni government to stop the devaluation of the rial and establish a consistent exchange rate all over the country.

Ali Nasser, a cashier in an exchange center in Sanaa, said it is a violation to accept the freshly printed notes. He told Al-Monitor, "Some customers receive money transfers from government-controlled areas, and they receive half the amount, and this is due to the divergent currency values. If a person sends YR100,000 to his family in Sanaa, the family would receive about YR50,000. This is a source of suffering for many families, and this crisis will not come to an end soon."

As the Houthi group sees the Yemeni government as pro-Saudi "mercenaries" and the government views the group as an Iranian-backed militia, the unhealthy economy will continue to take a heavy toll on the war-torn nation. The political instability has sowed the seeds of havoc in the country, and the continuing absence of economic unity remains a massive burden on millions of people across Yemen.