The UN is increasing its calls for support of the deteriorating economy in Yemen, where three-fourths of the population is struggling just to survive. 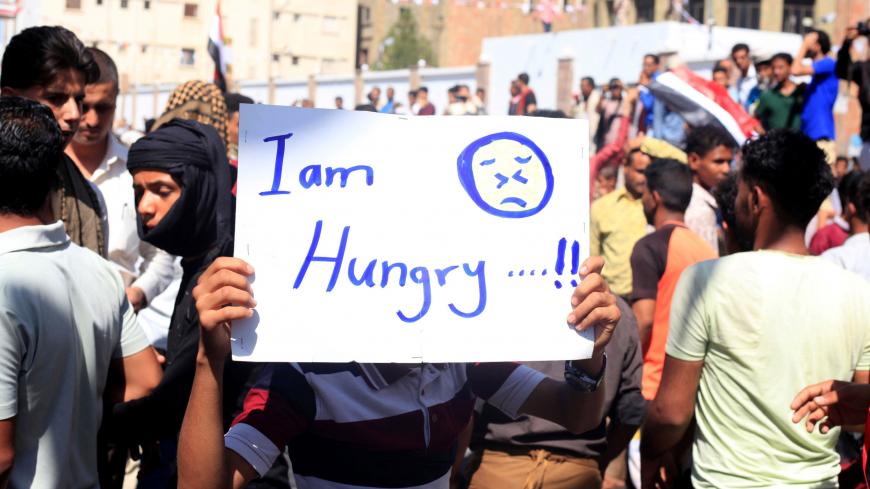 A man holds a sign during a demonstration against the deteriorating Yemeni economy, Taiz, Yemen, Oct. 4, 2018. - REUTERS/Anees Mahyoub

SANAA, Yemen — In the past two months, the Yemeni economy has faced its worst deterioration yet since the outbreak of the war, which is in its fourth year. The Yemeni riyal has lost more than 40% of its value as the price of the dollar has risen from 420 riyals to 750 riyals. As a result, prices soared, while citizens’ purchasing power dropped. More than 1.2 million government employees have not been paid for more than a year.

In this context, UN Secretary-General Antonio Guterres spoke to reporters Nov. 2 in New York, describing the situation in Yemen as “man-made."

"Yemen today stands at a precipice,” he said, calling for quick steps to support the Yemeni economy, stabilize the exchange rate and pay salaries and pensions.

Mark Lowcock, head of the UN Office for the Coordination of Humanitarian Affairs, also spoke of the unprecedented famine in Yemen before the UN Security Council on Oct. 23: “I warned you [in September] we were losing the fight against famine in Yemen. Since then, the situation has got worse."

The World Bank released a report Oct. 11 estimating that Yemen’s gross domestic product (GDP) has contracted by about 50% since 2014. "This is coupled with the collapse of the purchasing power of millions of Yemenis,” the report noted.

The conflict between the internationally recognized government in Aden and the Houthi government in Sanaa has wreaked havoc on the country. The former moved the Central Bank from Sanaa to Aden in September 2016. Subsequently, the Aden government stopped paying the salaries of employees residing in Houthi-controlled areas. The Aden government is demanding that the revenues of state institutions in those areas be transferred to the central bank, which Houthis are refusing to do.

Ali Mahyoub al-Asaly, an economics professor at Sanaa University, told Al-Monitor, “The main reasons behind the economic deterioration include the disputing parties using the economy as a weapon in the raging war, then seeking to control the country and seize the power resources necessary for the production process. Consequently, the Central Bank becomes unable to perform its key functions — specifically, controlling the cash liquidity that came into the hands of new owners affiliated with the parties. Those [owners] use the cash in currency speculation and on the black market through exchange stores that were opened in different provinces without licenses or legal constraints.”

Asaly added, “Other reasons also led to the economic downturn, including printing local banknotes without [sufficient collateral or backing], deterioration of the overall economic performance in key economic sectors, declining GDP, rampant corruption in the state institutions and the low money supply due to recession and halted investments.”

The quickest way to solve the economic problems, Asaly believes, is to end the war. Doing so will require a courageous, national decision from the warring parties, followed by practical, expedited and united action.

Mohammad al-Salami, who trades food products in Sanaa, told Al-Monitor, “Prices have soared, and citizens can no longer bear the situation. As traders, we're facing many problems and criticism from citizens who think we control the prices and are responsible for their increase. But it's not our fault. The price hike stems from the increasing price of the dollar, the war and the bad economic situation.”

UNICEF CEO Henrietta Fore said in a press statement Oct. 18, “The cost of food, fuel and water supplies has skyrocketed as the value of the national currency has plummeted. ... Families who can no longer afford basic food items could soon join the 18.5 million people who are already food-insecure.”

The economic situation continues to worsen quickly. The few remaining civic groups have had to refocus their efforts from improving Yemenis' quality of life to just trying to ensure their survival. Meanwhile, fighting is escalating in Hodeidah province amid the humanitarian catastrophe. Yemeni government forces, backed by a Saudi-led Sunni coalition, are battling Shiite Houthis to take control of the city of Hodeidah, a key port that is a lifeline for millions of Yemenis. The offensive came despite recent international calls to resume peace talks and end hostilities, calls that UN envoy to Yemen Martin Griffiths had welcomed.

Yemeni economist Abdul Wahed al-Obaly told Al-Monitor, “The economic crisis in Yemen is the worst compared with other countries at war in the region, such as Syria and Libya, where employees are still getting paid. Citizens in Yemen are torn by the lack of income and the price hikes. The Houthis’ seizure of power in 2014, their looting of reserves in the Central Bank and replacement of the local currency with the dollar, as well as the weak and corrupt behavior of the legitimate government, are behind the current collapse.”

Obaly said the most important steps toward a solution will only be possible when the internationally recognized government controls the revenues of all state institutions. “The authority has been unable to do so, even in the areas under its control. It must resume the oil and gas exports, operate ports and various revenue sources and send funds to the Central Bank of Yemen. This will allow the bank to control monetary policy and implement its economic measures," he said.

“In a parallel move, a comprehensive structure must be set for government staff who receive their salaries in hard currency. Also, appointments in public posts must be revised and reduced. All these are urgent actions that the government must start taking.”

Yemen has been at war since March 2015, though unrest began there with the Arab Spring in 2011. The UN Human Rights Office said it has documented more than 6,870 civilian deaths and nearly 10,770 injured since March 2015; it estimates those in urgent need of humanitarian aid at 22.2 million people — about 75% of the total population.