As Yemen is facing its worst humanitarian and economic crisis in its modern history, the Saudi-led coalition needs to step up and restore security in the liberated areas by eliminating militias. 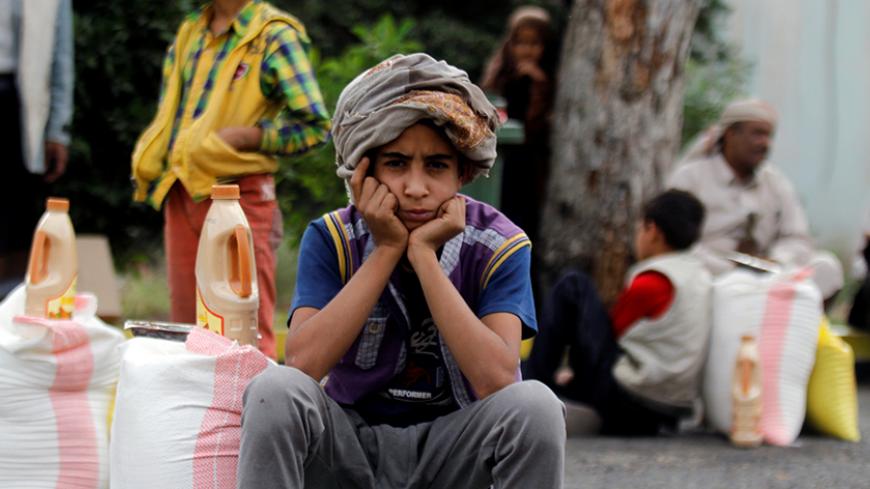 A boy sits next to food supplies he received from a local charity in Sanaa, Yemen, June 23, 2016. - REUTERS/Mohamed al-Sayaghi

The Yemeni warring parties were unable to reach an agreement during peace talks held in the Kuwaiti capital between April 21 and the end of June. The negotiation sessions were suspended with the intention of being resumed July 15. The resumption of the negotiations remains uncertain, especially after Yemeni President Abed Rabbo Mansour Hadi threatened to boycott the next round of talks due to differences with the United Nations special envoy, Ismail Ould Cheikh Ahmed. Even if negotiations are resumed, there are no guarantees that they will last for a shorter period or provide a positive outcome.

Meanwhile, the suffering of Yemenis continues with no end in sight for the ongoing war. It is becoming clear that no warring party will be able to claim complete victory, and that the only losers of this war are ordinary Yemeni citizens. With the destruction of basic infrastructure and the slow recovery in the “liberated” areas in the south of Yemen and most importantly the devaluation of the Yemeni riyal, the costs of this war are borne by Yemenis.

It is evident that the performance of Hadi’s internationally recognized government is far from satisfactory; liberated southern cities are lacking basic infrastructure. The city of Aden, for instance, which was freed from the Houthi grip a year ago, still faces severe electricity and water cuts that sometimes last for days. The security situation is deteriorating; deadly suicide bombings killed seven people in Marib in May and 42 people in Mukalla in June.

Most recently, six people were killed at a military base in Aden on the first day of Eid al-Fitr. Meanwhile, the remaining regions — which are either under Houthi control or witnessing constant fighting — face severe infrastructure problems with no prospect of reconstruction as long as the war continues.

Not only has the violence of the constant fighting in the country led to the worst humanitarian crisis in its modern history, with 13 million people in immediate need of lifesaving assistance, but the economic implications of the war also have played a major role in increasing the level of suffering ordinary Yemenis have endured over the last 15 months — and will continue to endure until a peace deal is reached. While the displacement of roughly 3 million people means that they are all out of a job and, therefore, can no longer provide for their families, the risk of an insolvency of the Central Bank — which could impact its ability to pay public sector wages — poses a greater threat of more people being unable to put food on the table.

In the past year, Yemenis have endured an inflation rate of over 30%, and according to reports a higher rate is expected this year. The devaluation of the currency has made it more difficult for people with savings to make ends meet, as their savings are constantly losing value and their purchasing power is declining. People without savings were hit hard.

The severity of the humanitarian crisis could be eased by tackling the economic implications of the war. The scarcity of critical imports such as food and medicine is mainly caused by the inability of domestic commercial banks to provide importers with guarantees, for their accounts in international banks are overdrawn, according to sources who requested anonymity. This could be eased by relaxing the Saudi-led coalition's financial siege on the country and allowing Yemeni banks to ship accumulated foreign currency (Saudi riyals, Emirati dirhams and US dollars) out of the country to be deposited in international banks so trade can be resumed.

There is a need for stakeholders — be they national, regional or international — to show more responsibility and accountability toward the suffering of Yemenis. Committing to funding the humanitarian response plan and increasing pledges is the first step. It is worth noting that the coalition countries engaged in combat in this war — such as Saudi Arabia, the United Arab Emirates, Kuwait and Qatar — contribute significantly less than Western countries that support the Saudi-led coalition. As of July 12, the United States and the United Kingdom pledged $232 million to the 2016 humanitarian response plan, while the contribution of Saudi Arabia and the United Arab Emirates amounts to only $87 million.

To tackle the financial instability in the country, efforts should be made by Hadi’s government along with the coalition forces to preserve and restore security in the liberated areas by eliminating any kind of militia presence in those areas to provide a suitable environment for a potential relocation of the Central Bank — either to Aden or Marib, away from the grip of the Houthi rebels. Only then can talk of a large deposit to the Central Bank in US dollars by coalition countries, of action by the Friends of Yemen group to save the currency from further devaluation and of ordering the printing banknotes to tackle the issue of the riyal scarcity in the market be taken seriously.

In addition, it is not desirable for the Yemeni government to take on more debt, which could destabilize the fragile financial situation of the country further; public debt in 2015 reached an alarming level of 94.4% of gross domestic product. Instead, more diplomatic efforts should be made to negotiate debt relief, lower interest rates and extend payment deadlines.

The slow response to Yemen’s humanitarian crisis poses many questions in regard to the competence of the Yemeni government and its willingness and ability to govern and manage the areas under its control — and the other parts of Yemen. It also questions the aims of the Saudi-led coalition’s war on one of the poorest countries in the world. Hadi’s government and the coalition’s main argument for starting this war was to save Yemen, but little has been done in that regard.