Yemeni conflict goes back to square one

Yemen’s internationally recognized government and Houthi rebels and their allies continue to engage in divisive efforts rather than attempting to end their conflict. 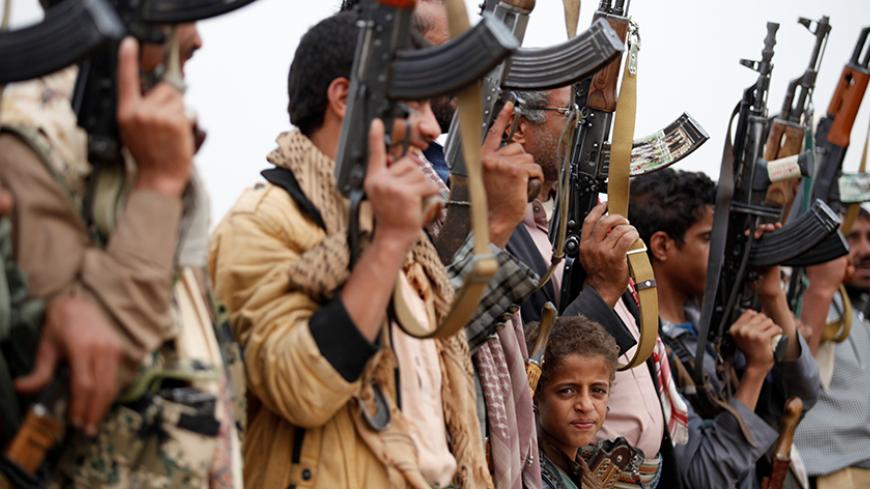 Tribesmen loyal to the Houthi movement carry their weapons as they attend a gathering to show support for a political council formed by the movement and the General People's Congress to unilaterally rule Yemen, Sanaa, Aug 14, 2016. - REUTERS/Khaled Abdullah

The Yemeni conflict is back at square one almost two years after the September 2014 Houthi rebel takeover of the Yemeni capital, 500 days into the Saudi-led war that began in March 2015 and after three rounds of failed peace talks. This time, however, the situation is even more complicated.

On July 28, one day after the exiled, internationally recognized and Saudi-backed government of Yemen, led by President Abed Rabbo Mansour Hadi, announced it had sold 3 million barrels of crude oil, the Houthis and their allies in the General People’s Congress, led by ousted President Ali Abdullah Saleh, signed an agreement to form a “political council” to run the country. The council's formation is likely in response to the Houthi/Saleh camp being excluded from reaping benefits from selling the country’s natural resources.

The agreement was followed by an announcement of the council's 10 members shortly after the exiled government’s prime minister, Ahmed Bin Daghr, requested that the International Monetary Fund (IMF) and other international financial institutions halt all transactions with the Central Bank of Yemen (CBY). The CBY has been relentlessly criticized by the exiled government in Saudi Arabia for the past three months for allegedly succumbing to control by the Houthi rebel group.

These recent developments reflect the chaos dominating Yemen and the complete disregard for the deteriorating humanitarian situation in the country not only by the Houthi/Saleh camp, but also by the recognized government.

Bin Daghr’s government justified its request to freeze CBY funds overseas — and thereby not deposit the revenues of the oil deal in the government’s account at the bank — by claiming that the bank's governor, Mohammed Awad Bin Humam, is unable to fulfill his duties impartially. Bin Daghr’s government believes that the depletion of the country’s foreign reserves in Yemen was caused by large withdrawals by the Houthis, de facto rulers of the capital, where CBY headquarters is located. Bin Humam explicitly rejected this accusation in a letter sent to President Hadi and seen by Al-Monitor. He claimed that the depletion of foreign reserves was a result of financing the import of basic commodities, including wheat, sugar and rice.

The request by Bin Daghr, regardless of whether it is heeded by the IMF and other institutions, will certainly have negative consequences on trust in the CBY and eventually on food prices in a country that is already suffering from high levels of food insecurity and child malnutrition. The CBY’s potential inability to provide commercial banks with guarantees to import food and medicine and with hard currency will also lead to a hike in prices and further devalue the local currency.

Bin Daghr’s government overlooks that, for the past year and a half, the CBY has had the not-so-easy task of saving the country’s already extremely fragile economy from a complete meltdown, and that the depletion of foreign reserves has been expected since the first day of the war, especially since the bank continued making debt service payments after the inflow of US dollars stopped with the halt of oil exports. In fact, it is remarkable that the bank has survived given the little foreign reserves it had.

Bin Daghr’s request raises a number of questions about both warring parties using ordinary Yemenis as human shields, so to speak. The Houthi rebels refuse to fully implement UN Security Council Resolution 2216, which requires that they withdraw from all captured areas and relinquish all seized arms, to spare Yemenis further Saudi-led coalition airstrikes and destruction, while the exiled government, if it manages to isolate the CBY, risks a famine in the country.

Meanwhile, the alliance between the Houthi rebels and Saleh, once old foes, became official with their “political council,” and after members of parliament convene for a vote of confidence, it will take the conflict into uncharted territory. The return to the Yemeni constitution by having parliament approve the council and abandoning the Houthis’ notoriously unconstitutional “constitutional declaration” of February 2015 reflects the desire of the Houthi/Saleh alliance to gain constitutional legitimacy, and thereby start seeking international recognition. Although it is unlikely this will happen, the council remains a dangerous tool in the hands of the Houthi/Saleh alliance, and if it is presented with a nomination for a new CBY governor — either or both of the warring parties is expected to seek a new appointment — that could signal potential secession by the Houthi/Saleh-controlled north, leaving the south, as it is, to the exiled government.

This scenario is worthy of consideration in a country where the political elite is infamously corrupt and has a distorted perception of governance, which primarily involves controlling as much of the country’s natural resources as possible, that is, oil and gas, to guarantee a source of income for itself. A political council, even if it wins a vote of confidence in the parliament — whose constitutional legitimacy is itself questioned since its term expired in 2009 and has been extended ever since — will not be able to operate or deliver anything to Yemenis without recognition by the international community. Moreover, the recognized government has been unable to provide basic services to areas under its control and has shown a lack of responsibility in its handling of the CBY dispute, raising frustrations among its supporters.

While international stakeholders and institutions are planning post-conflict projects — among them the World Bank Group’s “Yemen: Towards a Post-Conflict Recovery,” examining critical policy and institutional steps to restore public institutions and service delivery — Yemeni politicians show no genuine interest in ending the ongoing conflict. This leaves Yemenis in a bind, with mistrust dominating their relations with the Houthi rebels, the de facto power in the country, and with the internationally recognized, but exiled, government. Meanwhile, the influence of radical Islamist groups continues to grow in areas of fighting, and young, desperately poor Yemenis feel they have no other choice but to join them.