Beware of the failure of Yemen’s central bank

The Central Bank of Yemen continues to set new policies to tackle the rising inflation and devaluation of the Yemeni rial, knowing its policies will not be effective as long as there is no political will to stabilize the situation. 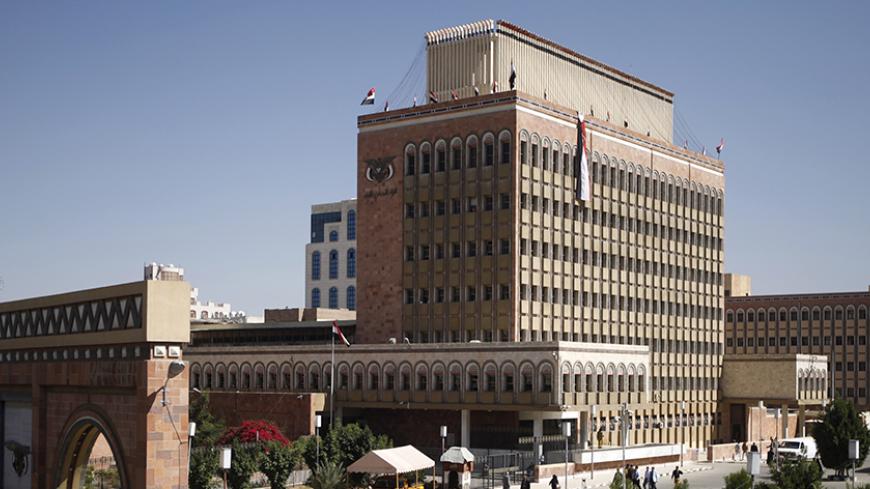 A view of the Central Bank of Yemen is seen in Yemen's capital, Sanaa, Nov. 15, 2015. - REUTERS/Mohamed al-Sayaghi

For the past 18 months, Yemen has been going through one of the most chaotic times of its modern history. Since the Houthi takeover of the capital, Sanaa, on Sept. 21, 2014, the country has been witnessing a gradual collapse of the state, which was accelerated when President Abed Rabbo Mansour Hadi left Sanaa for Aden and then for Riyadh. By March 2015, the Houthi rebel group was the de facto power running the country.

As the war continues, most of the country’s public institutions are barely functioning. The health sector cannot provide for the wounded and the sick with three doctors per 10,000 people, while 14 million people need help accessing health care. Education in schools and universities has been interrupted by the many rounds of fighting, and around 1.8 million Yemeni children are out of school because of the ongoing war.

One of the last standing public institutions in Yemen is its central bank. The Central Bank of Yemen (CBY) has been playing a major role in stabilizing the very fragile economic situation in Yemen since the outbreak of the uprising in 2011. It has maintained a very careful monetary policy in order to preserve the value of the Yemeni rial to spare the people of Yemen the agony of hyperinflation and devaluation during politically volatile times.

Since the Yemeni economy is a small economy, it took only a $1 billion deposit from Saudi Arabia in the CBY back in 2012 to provide some stability to the Yemeni financial system and enhance the trust in the CBY. In addition to that, Riyadh has been providing aid in the form of fuel and oil to the country since 2011 in a manifestation of its role in sponsoring the talks that led to the signing of the Gulf Cooperation Council Initiative and its support for the transitional government led by Hadi.

The trust in the CBY took a blow in March 2015 when the government along with the president had to flee the country, leaving financial matters to be run by the governor of the CBY.

The technocratic and bipartisan leadership governing the CBY is what enabled its survival. The CBY governor, Mohammed Awad Bin Hammam, is a widely respected official in a country where bipartisanship seems almost impossible. His administration banned cashing foreign transfers in their original currency for a few months in 2015 to stop the dollar drain after trade significantly slowed down when the Saudi-led coalition's airstrikes started.

This was a mechanism to curb devaluation of the Yemeni rial and substitute the inflow of foreign currency the country was supposed to earn from its oil exports, which were halted in March 2015. The CBY only lowered the value of the rial against the US dollar earlier this year by 17% — from 214 to 250 Yemeni rials to the dollar — to mitigate a bigger devaluation of the currency in the black market that was exchanging the dollar for 279 rials, 11.6% lower than the official exchange rate of 250. This is a signal by the CBY for the market to show it is recognizing the problem of the scarcity of hard currencies and is willing to adapt in order to regain the trust of the market.

While the foreign reserves of the CBY went down from $5.35 billion in 2013 to $4.6 billion in November 2014, the war and the cutting of sources of foreign currency — except for the remittances from Yemenis abroad — contributed in lowering the foreign reserves to $2.1 billion by the end of 2015, according to a report by Yemen's Ministry of Planning and International Cooperation.

According to newly appointed Prime Minister Ahmed Obeid bin Daghr, the CBY’s foreign reserves reached an all-time low last month of $1.3 billion, which is 28% of the prewar level of reserves of $4.6 billion.

Although some might want to blame the depletion of foreign reserves entirely on the Houthi rebel group, which is in fact withdrawing substantial amounts of money from the CBY to finance its war efforts, the reason behind the dwindling foreign reserves is primarily the ever-rising demand for foreign currency in the country.

The depletion of the CBY foreign reserves limits the range of anti-inflationary monetary policies the CBY can implement to stop a free fall of the value of the Yemeni rial. This limitation led the Houthis to arrest many owners of currency exchange shops who did not abide by the CBY’s official exchange rate. If the CBY cannot stabilize the value of the Yemeni rial, more capital will leave the country for more stable economies, prices of basic commodities will go up beyond the 30% inflation rate the country witnessed in 2015, real wages and purchasing power will decline even if nominal wages were raised and the gap between the poor and rich, who own assets in foreign currencies, will drastically widen.

An April report on the country's economic issues from Yemen's Ministry of Planning and International Cooperation urges an immediate and sustainable political solution for the crisis and advocates for a $5 billion deposit in the CBY to save the Yemeni financial system from imminent collapse.

Even if the CBY continues to set new policies to tackle rising inflation and the devaluation of the Yemeni rial, its policies will not be effective as long as there is no political will to stabilize the situation. This puts a huge responsibility on the conflicting parties to come up with a sustainable political solution to spare the Yemeni people further misery and deterioration in the standard of living. The economists of the CBY are doing their best to save Yemen from a financial collapse and now it’s time for politicians to do the same.