How long can the Houthis hold on to Yemen?

It seems the Houthi rebels are the only ones benefiting from the ongoing war in Yemen, as Saudi Arabia’s and Yemen’s economies have been badly affected. 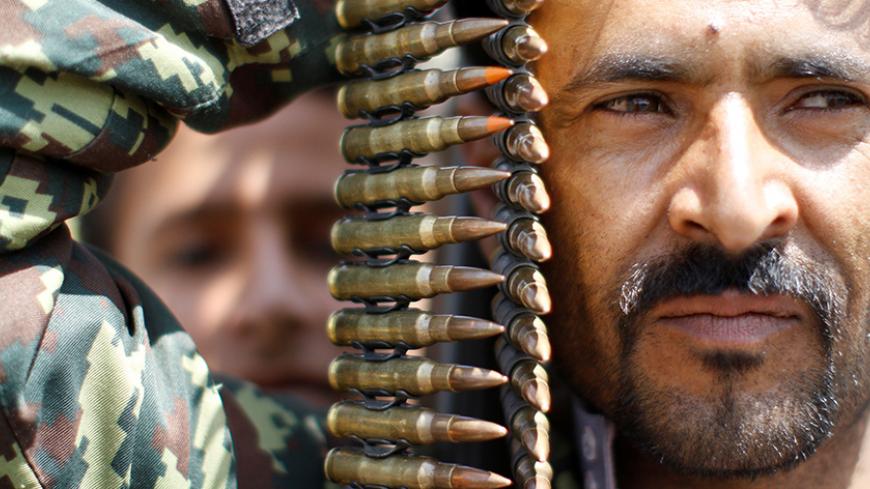 A man loyal to the Houthi movement holds up ammunition as he gathers to protest against the Saudi-backed exiled government deciding to cut off the Yemeni Central Bank from the outside world, Sanaa, Yemen, Aug. 25, 2016. - REUTERS/Mohamed al-Sayaghi

Both the Yemeni civil war and the Saudi-led intervention have lasted longer than anyone expected or wanted, a point made clear by the toll the conflict is taking on both countries.

At the end of 2015, nine months after Saudi Arabia formed a 10-nation coalition to fight the expansion of Houthi rebels in Yemen, the kingdom — with a gross domestic product (GDP) of more than $700 billion — posted its highest recorded budget deficit, an indication that the war’s economic implications are not to be taken lightly. Meanwhile, Yemen — which recorded its highest GDP at $37 billion in 2014 — saw its GDP shrink by 35% in 2015. War damage estimates stand around $19 billion, and the imminent insolvency of public institutions is expected. Sanaa-based public institutions, including ministries and the Central Bank of Yemen (CBY), remain under Houthi control, whose takeover of the capital in September 2014 led President Abed Rabbo Mansour Hadi to flee the country for Saudi Arabia in early 2015.

In July 2016 due to a liquidity crisis, the CBY suspended financing of all items in the state budget except for public servants' wages and domestic debt payments. The shortage of domestic currency in the banking system is now increasing the risk of a state default on the payment of wages and repayments to domestic lenders.

An August report by the Ministry of Cooperation and International Planning examined by Al-Monitor states that the amount of money removed from circulation in the first half of 2016 totaled 300 billion Yemeni rials (about $1.19 billion), with 44% of that leaving the banking system in June, compared to less than 50 billion rials (around $200 million) exiting in all of 2014. This not only demonstrates, in part, a lack of trust by the public in the banking system in such volatile times, but also gives one an idea of the extent of the shadow economy in the country.

The Houthi movement, originally outlawed, has been relying on the shadow economy and unofficial sources of funding to finance itself. The rebel group has been successful in capitalizing on its takeover of the state apparatus and territorial expansion to enlarge the size of the shadow economy, thereby diversifying its domestic sources of income. Since the start of the Saudi-led intervention in March 2015, foreign sources of funding for the rebel group have been vastly restricted.

State revenue, largely at the disposal of the rebel group, declined by 53.7% in 2015 due to the suspension of oil exports, which contributed to 45% of the state’s income in 2014, and a 19.2% decline in tax revenues, with businesses closing and laying off employees.

None of this, however, deterred the Houthis from cutting ministry budgets and redirecting the savings to their “war effort.” They also imposed a $20 war tax on civil servants, who constitute 1 million of Yemen’s 4.2 million employed workers. Last month, in a further attempt to cut spending on budgetary items unrelated to the war, the Houthi-controlled Ministry of Higher Education, without warning, stopped funding the studies of 800 scholarship recipients abroad.

Long before the current war, the Houthis had collected “zakat” (almsgiving) and cash donations to finance their many confrontations with the Yemeni army during the tenure of former President Ali Abdullah Saleh, their current ally. After their seizure of the capital, they received large sums of cash, allegedly from Hezbollah and Iran, which were delivered in sacks via airplane, and they continued to collect local donations for the war against the Saudis.

The Houthis also developed a huge black market for fuel and cooking gas — basic commodities for daily survival — when they began issuing licenses for private individuals to import fuel. This was after they lifted subsidies on fuel, a move that completely contradicted the stance they took against lifting subsidies that they adopted in the cause of overthrowing the government in September 2014. The arrangement subsequently led to the formation of a cartel of oil importers closely aligned with the rebel group.

Meanwhile, the exiled government has moved the war beyond the battlefield by trying to prevent the CBY from accessing Yemeni funds held overseas, to stanch financing of the rebel group, but it is hard to see how this will have the desired effect, as the Houthis were able to finance themselves through unofficial domestic channels before taking control of the state apparatus. The grave danger lies now in the CBY’s inability to pay public servant salaries, even after it began injecting mutilated banknotes into the economy. Another danger is in accelerating the rate of wealth transfer to the Houthis, a situation that will only prolong the rebel group's survival.

Much like in any other conflict, wealth gets transferred from the hands of the losers to the hands of the winners. Yemenis in need are and will be forced to sell off their assets at prices below their actual value. With the takeover of the state, the Houthis are currently the wealthiest group in the country, so they will be the ones purchasing these assets at bargain prices. This means a further concentration of wealth in the hands of the Houthi rebel group. At the same time, Hadi’s government is betting on being able to tighten the financial stranglehold on the Houthis to weaken their position, regardless of the human cost, which will be high after a year and a half of intense fighting in the country.

That the Houthis are believed to be largely responsible for the withdrawal of the 300 billion Yemeni rials from the banking system, by stashing banknotes outside official channels, and given their dominance over the shadow economy, it appears that the Houthis will not be significantly affected by public institutions' insolvency. Surviving the war in the months ahead is a luxury the Houthis can afford, while other Yemenis will remain in dire need of humanitarian assistance.

The state’s failure is the cornerstone for the prosperity of the rebel group. The Houthis managed to survive for two decades before they became the de facto rulers of Yemen’s capital and will be able to survive as long as the state remains weak. Strengthening the state and its public institutions, not allowing them to fail, is the only feasible way to weaken the rebel group’s position.