Palestinians in Gaza have organized rallies and donation campaigns for the Palestinians in Syria's Yarmouk refugee camp, which has suffered a months-long siege. 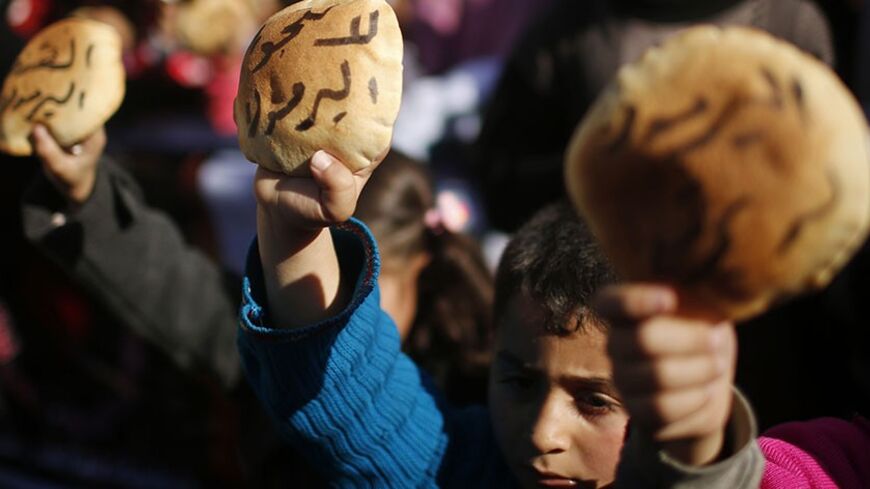 Palestinian children hold bread as they take part in a rally to show solidarity with Palestinian refugees in Syria's Yarmouk refugee camp, Gaza City, Jan. 16, 2014. The Arabic on the bread reads, "No to starving Yarmouk." - REUTERS/Mohammed Salem

GAZA CITY, Gaza — A multitude of slogans and symbols have emerged in the Gaza Strip to express support for the Palestinian refugees trapped in the Yarmouk camp in Syria. These symbols include empty pots and loaves of bread, along with the lighting of candles and carrying of coffins, to show solidarity with camp residents, who are suffering from the harshest of humanitarian crises.

Yarmouk is home to the largest concentration of Palestinian refugees in Syria. Established in 1957 over an area of 2.1 square km (1.3 miles), Yarmouk houses 144,000 registered refugees, according to the United Nations Relief and Works Agency for Palestine Refugees.

Rami Abdo, the director of the Euro-Mediterranean Observer for Human Rights, told Al-Monitor that nearly 1,900 Palestinian refugees have died in Syria since the onset of the current conflict, among them 790 in Yarmouk alone. Meanwhile, press reports from the camp indicate that 53 Palestinians have died of hunger since the warring factions imposed a siege on it in July 2013.

Dozens of solidarity vigils have been organized in the Gaza Strip this month in support of Yarmouk. They were distinguished by the broad participation of children, who carried signs that read, “I am with them” and “From the children of Gaza to the children of Yarmouk” as well as “From house to house in support of the Yarmouk camp.”

Areej, a young Gazan girl who had “I am hungry” painted on her forehead, took part in a solidarity vigil organized by the I Am With Them youth initiative in front of the International Red Cross headquarters on Jan. 4. She told Al-Monitor’s correspondent, “I came today to share the suffering of my young brothers and sisters in the Yarmouk camp and ask that the siege on them be lifted, as it is unjust and cruel.”

Close to Areej, a group of children with other slogans painted on their foreheads, among them “Gaza is with you” and “Save the camp,” carried a symbolic coffin on which were inscribed the names of children who have died of hunger in Yarmouk.

In Abdo’s opinion, Palestinian solidarity with the camp came late. He noted, “Gaza was the first to express solidarity, maybe because it endured similar living conditions. But to this date, one cannot claim that the camp has become a compelling public opinion issue among the Palestinian populace.”

Yarmouk was for several weeks a hot topic for activists on Facebook and Twitter, where it was given attention through the publishing of photographs, video clips and slogans reflecting the size of the tragedy suffered by the Palestinians there.

Youth activist Adham Abu Silmiyeh explained that the Gaza Strip’s solidarity with inhabitants of Yarmouk was due to the brotherly ties that exist between Palestinians, as well as their common national allegiance.

“We want to convey a message,” Abu Silmiyeh told Al-Monitor, “that Palestinians have nothing to do with the events taking place in Syria and that what concerns us is that the camps be kept out of the ongoing conflict.”

Other young people took it upon themselves to produce documentary films that reflect the suffering of the camp’s inhabitants and demand that the siege on them be lifted. Among the films circulating on social networking sites is one entitled “Save Yarmouk Camp,” developed and produced by Abdel Aziz Naaman, and subsequently translated into English so that it reaches the widest possible audience around the world.

In an interview with Al-Monitor, Naaman explained that the film’s intent was to demonstrate the extent of people’s suffering in Yarmouk, convey a message to the world demanding that everyone contribute to lifting the siege on the camp and allow the entry of adequate aid.

“We in Gaza have suffered a lot as a result of the Israeli siege,” he said. “That is why I decided to help and contribute through this video clip — so that their cries and agony are heard by all in the world.”

Comic strips addressing the Yarmouk crisis have spread through newspapers and news sites in Gaza. Among the most prominent creators of these cartoons is Alaa Allagta, who usually gives the Palestinian refugee issue priority over other Palestinian issues.

In a conversation with Al-Monitor, Allagta said, “The main motivation that compelled me to draw about the Yarmouk camp was a nationalist one, which emanated from my belief in the Palestinian cause, for these hungry martyrs were part of a refugee framework engendered by the Palestinian cause. Perhaps this would restore to our psyche the Palestinian right of return.”

He added that the Gaza Strip’s solidarity with the Yarmouk camp was due to many factors, most important among them the commonality of the siege imposed on both places. Allagta wondered, “Will the world remain a spectator to the siege imposed on the camp, as it remained silent vis-à-vis the siege on Gaza?”

On Jan. 11, 50 Palestinian radio stations in the West Bank and Gaza Strip launched Media Day of Solidarity with the Yarmouk Camp, during which press reports were read about the situation of the Palestinian there and calls were issued for donations to help them.

Preachers conducting Friday prayers on Jan. 10 asked worshippers for donations to be sent to the camp through aid convoys attempting to reach its inhabitants.

Some people are choosing to send donations personally through banks to brokers, who then transfer them to stricken families in the camp. This is what Fathi Sabah, the director of the Palestinian Institute for Communication and Development in Gaza, did.

In an interview with Al-Monitor, Sabah said, “As a Palestinian refugee, I donated to another Palestinian refugee who faces death on a daily basis, unable to find anything to eat or drink in the Yarmouk camp. Had I not been able to donate money, I would have donated blood, because those are our brothers and are Palestinians, just like us.”

Sabah called on all able Palestinians to donate to the camp’s inhabitants. He also asked them to express their solidarity by conveying their suffering to the world by any means and stressed the need to break the international silence around the plight of the camp’s population.

Abdo agreed, and confirmed that the issue of the Yarmouk refugee camp was being met with overwhelming international silence. He added, “As an example, the whole of Europe is currently hosting less that 0.5% of the people displaced from Syria, while leaving that burden to neighboring countries that seriously violate the refugees’ human rights.”