The plight of two US lawmakers offers a glimpse into Israel’s 52-year control over the fate of millions of people living outside its sovereign territory and its undermining of Palestinian civilians' right to move freely throughout the territories. 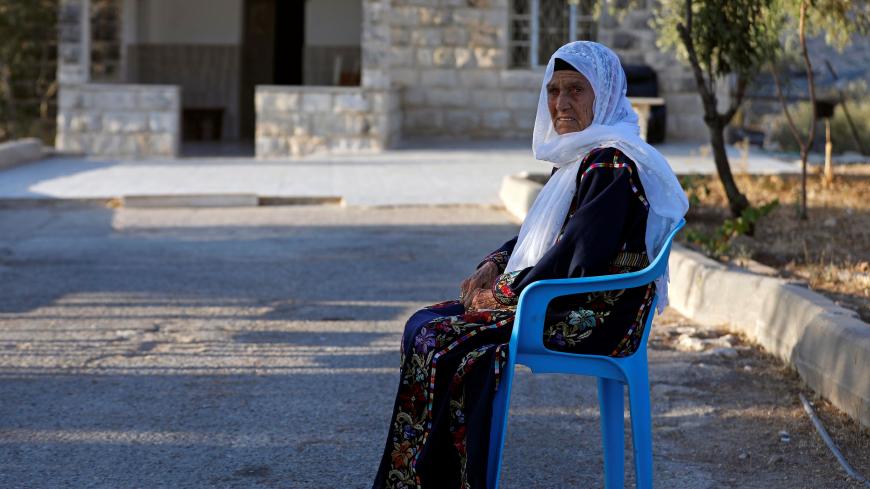 Muftia, the grandmother of US Congresswoman Rashida Tlaib, sits outside her house in the village of Beit Ur Al-Fauqa in the Israeli-occupied West Bank, Aug. 16, 2019. - REUTERS/Mohamad Torokman

After Israel’s refusal to let US Reps. Rashida Tlaib, D-Mich., and Ilhan Omar, D-Minn., enter the country, Tlaib submitted a request to enter on humanitarian grounds, to visit her elderly grandmother in the West Bank. Interior Minister Aryeh Deri accepted the request, but on several conditions unacceptable to the congresswoman.

Had Tlaib not gone back on her agreement to Deri's terms, the US congresswoman who has made headlines around the world would have surely been accorded VIP treatment at the airport and warmly embraced by her Palestinian grandmother.

On the other hand, had Tlaib been an anonymous American with an Arabic-sounding name who had once written posts advocating a boycott of products made in Israeli settlements, she would have ended up in a detention cell at Ben-Gurion International Airport awaiting expulsion. That happened less than a year ago, in October 2018, to American student Lara Alqassem, who had been accepted to Hebrew University in Jerusalem. Her sin was once being a member of an eight-person student group that called to boycott Israel. It was only after the intervention of Israel’s highest court that the interior minister was forced to rescind Alqassem’s deportation order.

“While folks are shocked that this happened to us,” Tlaib said at an Aug. 19 news conference with her colleague Ilhan Omar, “Many have been barred from going to Israel. … They are fellow Americans who cannot visit their families or their loved ones.” The Americans to whom Tlaib referred were not all activists for the Boycott, Divestment and Sanctions movement. For example, there was an American of Palestinian origin whose cousin was a member of a terror organization. Another had a partner living in East Jerusalem, raising concerns that he might wish to be united with her forever and, God forbid, pose other demographic challenges for Israel. The third was born in East Jerusalem and her entire family lives there, but unfortunately for her, her doctoral studies abroad lasted longer than seven years and she is no longer considered a resident of Israel.

The plight of the two US lawmakers and Aug. 19's World Humanitarian Day offer an opportunity to examine Israel’s 52-year control over the fate of millions of people living outside its sovereign territory. Under the guise of security considerations, Israeli authorities have been undermining the basic right of Palestinian civilians to move freely throughout the territories, which Israel itself agreed constitute an integral whole.

Had Tlaib been a resident of the Gaza Strip, Israel would probably have turned down her request to visit her aging grandmother. At best, the Israeli human rights organization Gisha, dedicated to helping Gaza residents, might have managed to convince an Israeli court that she does not pose a security threat and should be allowed a short family visit to the West Bank. Gaza residents who have managed to leave the Strip and go abroad are banned from entering the West Bank even through the Allenby Bridge that serves as the border crossing between Israel, the West Bank and Jordan.

There were many incidents in the past year of security considerations evaporating following Gisha's legal appeals or threats to invoke the Supreme Court. A grandmother from Gaza was denied a permit to take part in her granddaughter’s wedding in Israel. A Palestinian resident of Gaza was denied permission to attend her sister’s wedding in Israel. An Israeli citizen was blocked from visiting her sick brother in Gaza. For weeks, Israel refused to allow an American citizen to enter the West Bank to visit his dying mother since he was registered as a resident of Gaza. By the time he finally received a permit, his mother was clinically dead. For two and a half years, Israel blocked a six-year-old child from leaving the Gaza Strip to move in with his family in the West Bank.

Had Tlaib been living in the West Bank town of Ramallah and asking to visit her grandmother in a refugee camp in the Gaza Strip, Israeli authorities would have demanded that she change her address to Gaza and waive her right to return to the West Bank. In response to a petition by Gisha, the state admitted in court that it rarely allows Palestinians to move to the West Bank, while it tends to approve Palestinian applications to settle in Gaza.

Under Israel’s 2003 Nationality and Entry into Israel Law, Palestinians from the occupied territories who marry an Israeli citizen or resident are denied legal status in the country. The law was adopted as a temporary measure, ostensibly in response to security threats during the second intifada. The Knesset has extended the measure every year since.

In a bid to overturn this decree, The Center for the Defense of the Individual argues that the law is particularly harsh for Palestinian parents and their children when one parent is an Israeli resident of East Jerusalem and the other a resident of the West Bank. While Israel’s 1967 annexation of East Jerusalem cut it off from the West Bank, ties between residents have been maintained over decades. Family ties are strong and marriages between them are still common.

During a June 2017 Knesset discussion on further extension of the 2003 order, Knesset member Issawi Freij of Meretz asked the chair of the Foreign Affairs and Defense Committee, Avi Dichter of the Likud, “Why are you presenting a temporary law whose role is ethnic and racist? Why continue to hide behind dry slogans? Why don’t you say outright that the law is designed to prevent the entry of Arabs into Israel? Do not hide: One is not allowed to fall in love with an Arab woman of Palestinian origin. Tell the truth.”

If Tlaib had been the daughter of Palestinian refugees who fled or were expelled in 1967 from their lands in the Jordan Valley to the Hashemite Kingdom, her request to visit her grandmother would not have made it across the Jordan River. Israel has blocked the re-entry of some 2,000 Palestinians who left the Jordan Valley to prevent them from laying claim to their lands, which were unlawfully handed over to Jewish settlers in the region. All of their applications to return to the territories to be reunited with their families or even for short visits have been denied. The explanation? Security considerations, of course.

If the American congresswomen are truly concerned about the fate of the Palestinian residents of the Israeli-occupied territories, they would be well advised to distance themselves from the justified anti-settlement boycott campaign, which I believe has turned into a campaign to de-legitimize the State of Israel and an anti-Semitic club. Instead, they could take advantage of the massive coverage to promote the basic rights of the occupation’s victims.