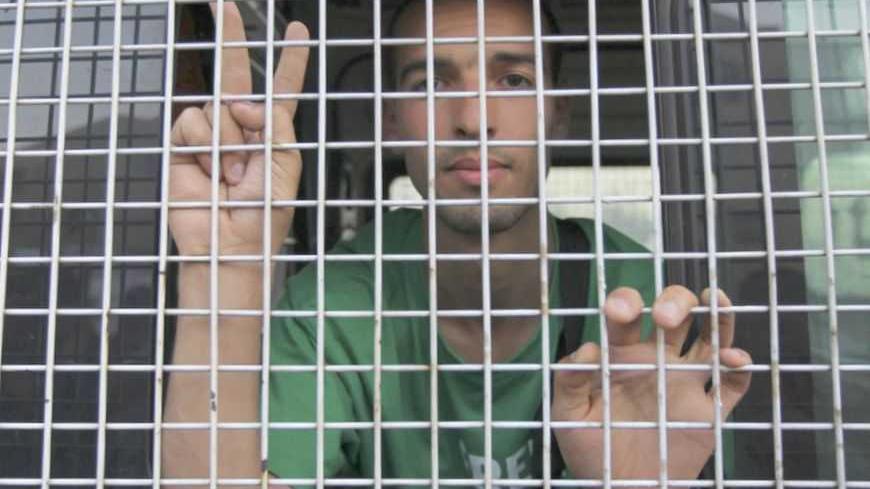 An activist flashes a peace sign after being arrested by Jordanian police during protests at the Israeli Embassy in Amman after being barred from entering the West Bank via the King Hussein (Allenby) Bridge to deliver aid to students. - REUTERS/Muhammad Hamed

Over the past few years, Israeli authorities have increased the frequency of denying foreign nationals entry to the occupied territories at its land, sea and air border crossings, where it exercises full control.

International solidarity activists attempting to renew their visas or travel back to Palestine after stays in their home country are sometimes being denied entry and are issued a ban that prevents them from entering Israel for ten years.

The 2011 and 2012 summer “Flytilla” campaigns saw hundreds of international activists — who publicly declared their intention to travel to the West Bank — arrive at Ben Gurion Airport and be denied entry. Dozens more were blacklisted and forbidden to board planes in their respective countries to fly to Israel.

In this atmosphere, in July 2012 Nitzan Alon, head of Israeli Central Command, approved an order that granted the Israeli Population and Immigration Authority the right to search for and arrest internationals residing illegally in the West Bank in order to deport them on the grounds of overstaying their visa.

Israel is also, more often than not, denying entry to foreign nationals of Palestinian heritage, normally without explanation. “We don't have statistics, but the issue has been covered in the press for the past few years,” said Sari Bashi, the executive director of Gisha, an Israeli NGO that advocates freedom of movement for Palestinians. “For a time, Israel was stamping their passports with a ‘no reentry’ stamp, preventing them from traveling back and forth.”

Recently, Nour Joudah, a Palestinian citizen of the United States, was denied entry twice within two months, after she left the West Bank to visit friends in Jordan over Christmas break.

Joudah, a full-time English teacher at the Ramallah Friends School, was first denied entry at the Allenby border crossing on Jan. 5, despite having a one-year multi-entry visa, issued in September 2012 by the Israeli Ministry of Interior and coordinated by the United States Agency for International Development.

“After waiting for long hours, an Israeli female security official, accompanied by an armed security official, came to me holding my passport and said, ‘You know you are going back to Jordan, correct?’” Joudah recounts. “I replied that no, I didn’t know, and asked what the basis for that was. She responded simply with ‘security reasons.’  When I inquired further, she told me that I was denied entry and that ‘our government does not do security checks when they grant visas.’”

Joudah, whose parents are originally from the port city of Ashdod (Isdoud), immediately contacted a lawyer, Emily Schaeffer, who began corresponding with the Ministry of Interior to inquire about Joudah’s denial of entry and subsequently the cancellation of her visa.

On Jan. 31, the ministry replied that Joudah had been denied entry because of “security reasons.” Two weeks later, Schaeffer submitted an administrative appeal to the ministry and asked for an urgent response, as Joudah was stranded in Jordan with no income or resources. At the same time, Joudah was in touch with her US congressional representatives, Sheila Jackson-Lee and Keith Ellison, who, after corresponding with the Israeli Embassy in Washington, DC, and in coordination with the Israeli Ministry of Foreign Affairs, advised her to try reentering again, on Feb. 25.

In the meantime, the Israeli security apparatus Shin Bet issued a statement asserting that Joudah had been denied entry because, it reported, she had refused to answer certain questions, which led security officers to consider her uncooperative.

“This claim is of course completely false,” Joudah maintained. “I was at the Allenby crossing for over seven hours and answered every question I was asked.”

In an interview with the Electronic Intifada, Joudah said that her interrogator wanted her to name everyone she had been in contact with in Ramallah. “Basically they wanted me to give a list of every young Palestinian that I knew so that [the interrogator] could create a file of phone numbers to tap. And I wasn’t going to give him that, that’s just silly.”

On her second attempt, Joudah was again denied entry, at Ben Gurion Airport, and spent the night at the immigration detention center before being put on a plane back to Jordan. Her lawyer filed an emergency judicial hearing, which a judge flatly rejected.

“What is odd about this is that there is no possible indication to hold Nour on security reasons,” Schaeffer said. “She’s just a schoolteacher.”

In addition to the “security risk” claims, in some cases Israeli authorities are quite explicit about denying entry visas to Palestinian holders of foreign passports simply due to their “Palestinian-ness.”

One woman, Reem Mansour, her pseudonym for this article, had applied for a work visa after she got a job with an international NGO in the West Bank in summer 2012. Although a US citizen, she was refused a visa and told that she had to leave the country by Aug. 31.

“The denial letter I was given was written in Hebrew and stated that they were refusing my work visa because I had family of the first degree in the territories and because my father was born in the country,” Mansour said. “My lawyer filed for an appeal, but I have yet to hear back from the ministry.”

According to the Right to Enter campaign, in 2010 the Israeli government announced that it would only issue work permits to foreign nationals working with 12 particular international NGOs, thus replacing work visas with tourist visas for all others.

“After international pressure, some arrangements have been made to allow foreign passport holders traveling frequently to the West Bank to receive 'PA only' visas, allowing them to enter the West Bank, but not East Jerusalem or Israel,” Sari Bashi explained.

The US State Department has objected to the “PA only visa” — whose stamp bears the name “Judea and Samaria” — declaring, “We have let the Government of Israel know that these restrictions unfairly impact Palestinian and Arab American travellers and are not acceptable.”

Because Israel is an occupying entity, it lacks sovereignty to deny foreign nationals — whether of Palestinian origin or not — entry to the occupied territories. With its restrictions nonetheless being commonplace, Israel’s dominance over the border crossings only serves to further entrench fragmentation and annexation of the territories and completely disregards freedom of movement as a right of everyone under international law.