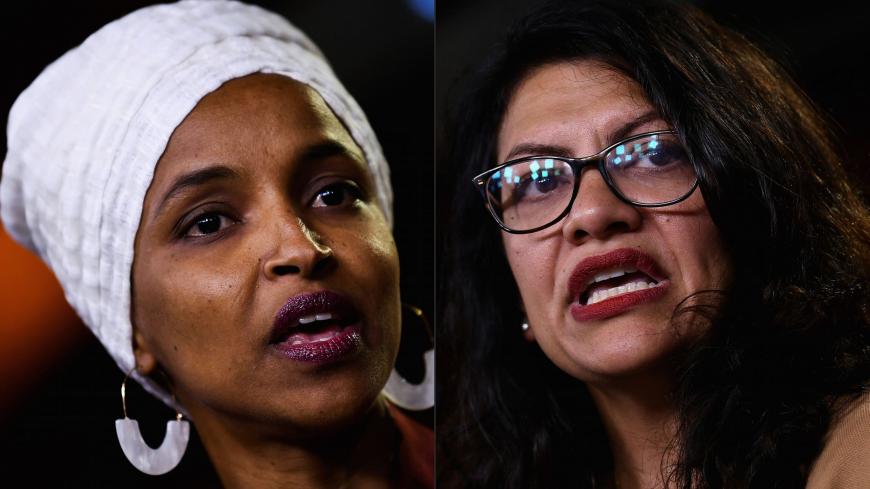 This combination of pictures created on Aug. 15, 2019 shows Democrat US Representatives Ilhan Abdullahi Omar (L) and Rashida Tlaib during a press conference, to address remarks made by US President Donald Trump earlier in the day, at the US Capitol in Washington, DC on July 15, 2019. - BRENDAN SMIALOWSKI/AFP/Getty Images

Pro-Israel Democrats railed against Israel’s decision to ban US Reps. Rashida Tlaib, D-Mich., and Ilhan Omar, D-Minn., from visiting the West Bank. The decision was made under apparent pressure from President Donald Trump.

Key Democratic leaders who had previously clashed with Tlaib and Omar over their vocal support for the pro-Palestinian boycott, divestment and sanctions (BDS) movement wasted no time in publicly urging the Israelis to reverse course.

“The decision of the Israeli government to deny entry to Israel by two members of Congress is outrageous, regardless of their itinerary or their views,” House Majority Leader Steny Hoyer, D-Md., said in a statement, noting that he had urged Israeli Prime Minister Benjamin Netanyahu not to ban the two lawmakers as recently as Wednesday.

House Foreign Affairs Committee Chairman Eliot Engel, D-N.Y., who had made a similar case to Israeli Ambassador Ron Dermer on Wednesday, also argued that "refusing entry to members of Congress looks like Israel closing itself off to criticism and dialogue.”

“It won’t surprise anybody that I have disagreements with Representatives Omar and Tlaib when it comes to Israel,” said Engel. “If Israel’s government hopes to win the support of American lawmakers across the political spectrum, then this visit could have been an opportunity to share views and make a case for why American support for Israel is so important.

Under a 2017 law, the Israeli government can keep anyone who supports boycotts of Israel — or even boycotts of Israeli settlements — from entering the country. But Dermer had previously committed to allowing the two Muslim lawmakers to enter Israel and the West Bank “out of respect for the US Congress and the great alliance between Israel and America.”

That changed today after Trump tweeted, “It would show great weakness if Israel allowed Rep. Omar and Rep. Tlaib to visit.” He went on to accuse them of hating “Israel [and] all Jewish people,” adding that “there is nothing that can be said or done to change their minds.”

Omar, who sits on the Foreign Affairs Committee, promptly hit back with her own statement. She accused Israel of implementing “Trump’s Muslim ban,” calling it “an insult to democratic values and a chilling response to a visit by government officials from an allied nation.”

A tentative itinerary for the trip — obtained by Israel Public Broadcasting’s diplomatic correspondent Gili Cohen — initially had the duo departing for Tel Aviv on Saturday before journeying to Jerusalem and the West Bank. Miftah, a nonprofit head by Palestinian lawmaker Hanan Ashrawi, was set to sponsor the trip alongside the Forum for Cultural Engagement, which coordinates with the State Department and the private sector on public diplomacy programs.

The trip was slated to include meetings with representatives from the United Nations Relief and Works Agency for Palestinian Refugees to discuss Trump’s Palestinian aid elimination and with members of the Palestinian Christian community. The congresswomen were also expected to visit the Al-Aqsa Mosque, the Western Wall and Khan al-Ahmar, a Bedouin community that Israel seeks to demolish. Tlaib, a Palestinian American, had also planned to visit family living in the West Bank.

While Tlaib and Omar have previously clashed with Democratic leadership, party leaders were quick to condemn Israel for banning them.

“Israel’s denial of entry to Congresswomen Tlaib and Omar is a sign of weakness and beneath the dignity of the great state of Israel,” House Speaker Nancy Pelosi, D-Calif., said in a statement.

And Rep. Ted Deutch, D-Fla., who chairs the House’s Middle East panel, noted his “strong disagreements” with their views but nonetheless condemned the decision.

Deutch also chairs the bipartisan House Ethics Committee, which had not approved the trip as recently as Wednesday. Still, the Ethics Committee regularly greenlights trips mere days before lawmakers depart. While a committee spokesman declined to comment, several other Democrats on the committee also lambasted Israel’s decision.

Rep. Dean Phillips, D-Minn., another pro-Israel Democrat on the Ethics Committee, said he was “appalled” by the decision, arguing that it “sets a damaging precedent for a free and democratic nation and our most important ally in the region.”

And fellow Ethics Committee member Rep. Susan Wild, D-Pa., reiterated her opposition to BDS but said, “I do not believe this is about BDS.” Wild noted that pro-Israel Democrats “are leaning on our leaders to exercise their influence and reverse this decision.”

“We disagree with Reps. Omar and Tlaib’s support for the anti-Israel and anti-peace BDS movement. Along with Rep. Tlaib’s calls for a one-state solution,” AIPAC said on Twitter. “We also believe every member of Congress should be able to visit and experience our democratic ally Israel firsthand.”

Halie Sofier, the executive director of the Jewish Democratic Council of America, argued that the decision is “counterproductive and plays into President Trump’s goal of politicizing support for Israel.”

For its part, the nonpartisan American Jewish Committee accused Tlaib and Omar of seeking “to undermine the very legitimacy” of Israel, blasting the duo for not requesting meetings with Israeli officials or Knesset members from “any mainstream party” and for labeling it as a “delegation to Palestine.” However, the statement also said that “Israel did not choose wisely” when faced with “two less-than-ideal options” and argued that “the costs in the US of barring the entry of two members of Congress may prove even higher than the alternative.”

Republican Jewish Coalition spokesman Neil Strauss also offered a dim view of the trip but ultimately came to the opposite conclusion, calling the ban “the right decision.”

“It would be unfair to expect Israel to treat them differently than anyone else applying to visit the country,” said Strauss.