Past attempts to encourage Palestinians to voluntarily emigrate have always failed, so time and effort would be better invested in reaching an Israeli-Palestinian peace agreement than pursuing a new push by the government of Prime Minister Benjamin Netanyahu for Gaza residents to voluntarily move elsewhere. 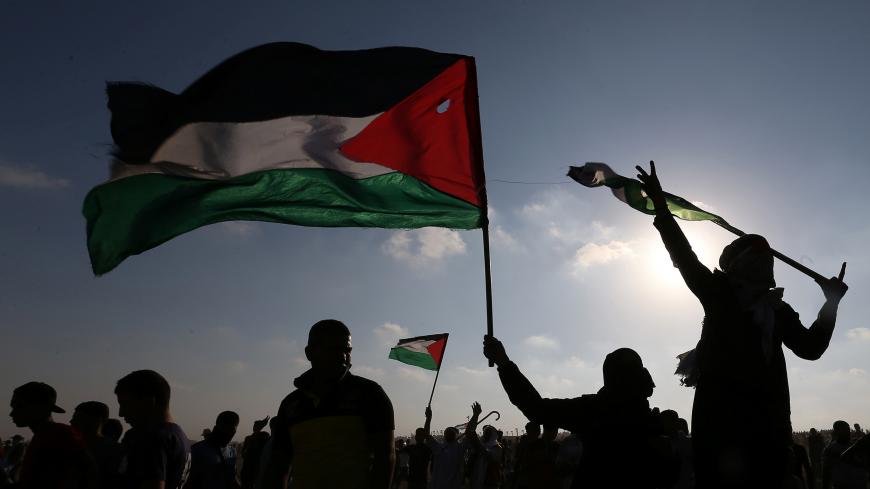 The news emerging from a briefing by an unnamed Israeli official during Prime Minister Benjamin Netanyahu’s urgent Aug. 18 Ukraine visit had nothing to do with the trip and probably everything to do with the upcoming elections. The official in Netanyahu’s entourage told reporters covering the visit that the National Security Council had been asked to draw up a plan for encouraging residents of the Gaza Strip to leave their homes and move to Arab and other countries. Israel’s security Cabinet has seriously debated the idea, but so far, the authors of the plan have not found a country willing to take in the would-be emigres.

The idea reminded me of “Through Secret Channels” (1995), written by Mahmoud Abbas, the current Palestinian president. Parts of the book focus in great detail on the Oslo peace process between Israel and the Palestinians, and others describe the far more fascinating process the writer underwent leading to his deep engagement in efforts to reach peace with Israel. Abbas writes that at the beginning of the 1970s, he came across an article noting that Jewish migrants from Arab states constituted the majority of Israel’s Jewish population. He was astounded and then felt that he had hit upon a brilliant idea for resolving the Israeli-Palestinian conflict: The PLO would call on all the Arab states to take back the Jews who had abandoned their homes there!

Abbas reveals that between 1970 and 1977 he read voraciously about Israel, a fact that led to more than one raised eyebrow among his colleagues, who saw his interest as a type of betrayal. He went on to write two books, claiming that part of the solution to the Israeli-Arab conflict might lie in the return of the Jews from Arab countries to the lands where they were born and raised. In these books, Abbas specifically urges Egypt, Iraq, Tunisia, Morocco and Yemen to state their immediate willingness to take in the migrants and guarantee them a warm welcome. While the states did not reject his call, their response was not sufficiently enthusiastic, at which point he realized that the solution was unworkable from their perspective.

Subsequently, Abbas realized that talk of Jews leaving Israel if the first intifada (1987-1993) spread from the occupied territories into Israel was also nonsense. The Jews would not leave the area just as the Palestinians would not.

Abbas quotes a conversation with Naim al-Ashkar, a Palestinian Communist Party leader, at the height of the intifada, during which he asked, “Do you agree with me that the intifada erupted as a way of bringing about the withdrawal of the Israeli forces from Gaza and the West Bank?” Ashkar responded in the affirmative, and Abbas then asked, “Do you think our people in Gaza and the West Bank would agree if we were to ask them to continue throwing stones for as long as it takes to drive the Israelis out of Haifa, Jaffa and Acre?” His interlocutor replied, “No.” Then, Abbas asked, “What would be their response?” Ashkar answered, “They would throw the stones at us.” Both men thus concluded that there was no other way to resolve the problem other than through a negotiated arrangement.

Abbas was not the first to come up with ideas involving the movement of populations. When Israel’s War of Independence ended in 1949, the Israeli government and other national institutions threw out all sorts of ideas on the fate of the new state’s Arab citizens, whom many Jews viewed as a potential fifth column. The thrust of the discussions did not include the forced expulsion of the Arabs; they focused on resettling them abroad under generous terms. Israel’s first prime minister, David Ben-Gurion, is quoted as telling members of his party, Mapai, in January 1951, “These Arabs should not stay here, just as American Jews should not stay in America. … I think everything must be done so that an Arab lives in an Arab state.”

Talk then turned to action. The government set up a special committee to deal with the “rehabilitation” of the refugees headed by Yosef Weitz, an official of the Jewish National Fund and the central visionary of a population transfer. The committee sought “solutions” abroad for the Arabs that had become citizens of the new State of Israel. Operation Yohanan was an initiative to offer farmland in Argentina to Christian Arabs from the Galilee, mostly from Jish. Another proposal, dubbed “The Worker,” offered Palestinians jobs in Europe, which was in the process of reconstruction with US Marshall Plan money after the devastation of World War II. Given that none of the proposals engendered significant Arab enthusiasm, efforts at a “willing relocation” of Israeli Arabs were dropped in the mid-1950s.

The idea of transfers resurfaced immediately after the 1967 Six-Day War, this time targeting Palestinian residents of the West Bank and Gaza Strip. According to an internal Foreign Ministry memo, cited in 2018 in the newspaper Makor Rishon, “Voluntary relocation should be encouraged from Gaza to the West Bank, and some of it to Jordan and the East Bank and from there to other parts of the Arab world where there are opportunities. Despite the political complications, we must actively raise the possibility of settling refugee in el-Arish [in the northern Sinai Peninsula]. This must be done discreetly and ‘spontaneously’ and under no circumstances should this be declared as official policy or appear to be organized by us.” The el-Arish plan would have required extensive development in the desert, including water desalination facilities and energy production as well as construction of manufacturing plants to provide varied employment for the Palestinians who would resettle there, but none did.

In 1968, a US Senate subcommittee headed by the late Ted Kennedy prepared a detailed plan for the resettlement of 200,000 Gaza Palestinians to various countries, among them West Germany, Argentina, Australia, Brazil, Canada, New Zealand, Paraguay and the United States. The Israelis privy to the plan were said to be enthusiastic about it, but nothing ever came of it, whether because the states were unwilling to take in the emigres or because the emigres did not wish to be taken in or for some other reason.

After the Six-Day War, the Israeli national unity government formed in the late 1960s toyed quite a bit with the idea of encouraging Palestinian resettlement. Years later, it was revealed that a forum of government ministers had discussed payments to Palestinians who would agree to move to South America. There were few takers willing to leave their homes.

The person who threw out the idea during Netanyahu’s Ukraine visit is probably not well versed in modern Israeli and Palestinian history. Ideas for the voluntary relocation of Jews and of Palestinians have never been successful and never will be. Few people are willing to leave their homeland in return for money. It seems that the energy put into developing such schemes would be better invested in finding a negotiated settlement that allows the opposing sides to live together rather than uprooting one or the other “voluntarily” or otherwise.