Following the appointment of a new Yazidi emir, two other Yazidi leaders announced themselves as new emirs. 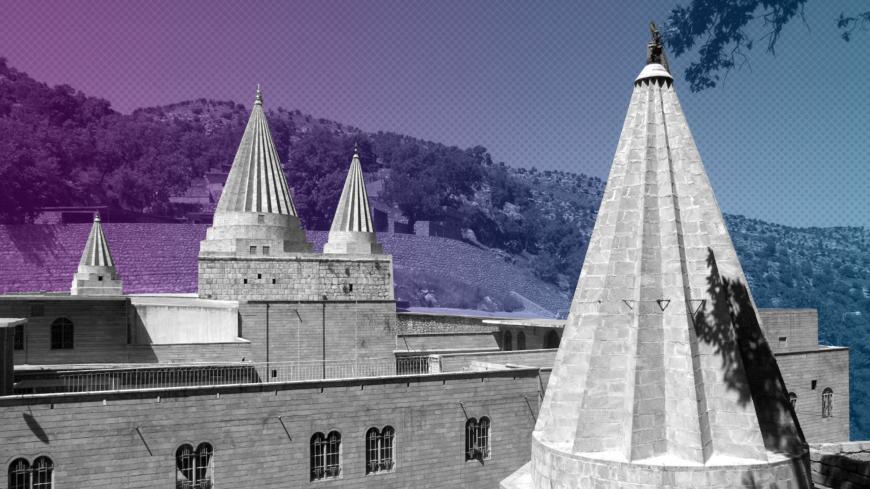 DAHUK — The inauguration of Hazim Tahseen Bek as Yazidi prince caused a rift within Yazidi society due to the way the new prince was appointed, and it sparked controversy over his proper representation of different Yazidi classes and groups. Meanwhile, two others proclaimed themselves to be Yazidi princes — the first in Sinjar and the second in Germany — thus threatening more division among the Yazidi minority following the 2014 Yazidi genocide.

As soon as Bek was inaugurated July 27 at the Lalish temple in Sheikhan east of Dahuk, his appointment provoked division within the family of deceased Prince Tahseen Said. Young elites also objected to the way the new prince was imposed upon them and doubted the legitimacy of the process. They dismissed the appointment as “a step that does not respect the will of Yazidis and does not enjoy the approval of Yazidis in general. It also does not fulfill the wish of late Prince Tahseen Said who recommended that the inauguration have Yazidi approval.”

In a significant development, Nayef Bin Daoud proclaimed himself prince of Sinjar amid blessings from clerics and tribal and influential figures in a temple in Sinjar. A prominent Yazidi figure told Al-Monitor from Erbil, the capital of Iraq's Kurdistan Region, that Kurdish parties opposing the ruling party in Erbil along with the Kurdistan Workers Party instigated this step amid silence and with implicit approval from Baghdad.

Anointing a new emir will tear Yazidis apart at a critical time, as they need to be more united than ever and must decide on the fateful issues related to their future as a minority. Most Yazidis were displaced from Sinjar after the Islamic State (IS) invaded the city in August 2014. Meanwhile, there seems to be no sustainable solution for displaced Yazidis who have settled in the Iraqi Kurdistan Region on the horizon.

Haiman Faraj Khayri, a young Yazidi lawyer from Tahseen's family, said the inauguration of Tahseen as prince is the best solution despite the disapproval of some Yazidis and objective opposition to it. He believes it is better than the inauguration of a prince who threatens Yazidi unity and identity and puts them at risk of endless rivalry and conflict.

Regardless of the concerns of Yazidi elites over the results of competition for the Yazidi emirate, other Yazidi activists believe Tahseen's source of power comes from his royal family roots and his residence in Sinjar. This is how he earned the respect of Sinjar’s traditional elites. His inauguration is considered a response from Sinjaris to the inauguration of a prince from Sheikhan without consulting them. Nevertheless, according to Yazidi activist from Sinjar Talal Haskani, he was chosen by traditional elites based on regionalist and political considerations, and the young generation was not consulted.

Bin Daoud did not hide his ambition to play a role in the future of Yazidis and announced March 5, 2017, alongside Christian and Turkmen allies, the idea of a region for minorities. He explained to Al-Monitor: “The alliance is an advanced step in the framework of an international solution to provide international protection for minorities in Iraq and push popular mobilization of our components for a just and legitimate cause that has long been waiting for a suitable solution.”

On Aug. 9, royal family member Umaya Mouawiya proclaimed himself to be the leader of Yazidis outside Iraq. Mouawiya announced himself prince of Yazidis in the diaspora in a statement to Yazidis living in Europe and the rest of the world.

He said, “I assume the historical responsibility of establishing a Yazidi emirate in the diaspora, based in Germany, managing the affairs of Yazidis and working on uniting them and alleviating their pain and grief, as well as supporting them in their tough circumstances.” Mouawiya added, “My inauguration was the result of a series of meetings and calls with the educated and common Yazidi class in Germany and the European Union countries. They all agreed to my inauguration as Yazidi diaspora prince.”

He justified his step by saying he aims to unite Yazidis, years after the genocide. “Yazidis have been experiencing critical circumstances since the genocide, which weakened and crippled Yazidi unity. From migration to poverty and anguish, our community has had its share of pain,” the statement read.

Competition over Yazidi leadership has widened the rift among Yazidis and threatened their future and the ability of their leaders to unite their stances. In addition to the geographical division between Sinjar (the scene of the genocide and the widest demographic concentration of Yazidis) and Sheikhan (location of the main Yazidi temple, the official emirate and the spiritual council) due to two independent princes leading them, Mouawiya's announcement from Germany threatens more segregation between Yazidis in Iraq and abroad. He lives in a big European country that has the largest Yazidi population outside Iraq, counting 140,000 Yazidis, according to Yazidi activists.

The competition between the three men opens a new page of Iraqi conflict in the history of Yazidis.

With the presence of two Yazidi emirates, one in Sheikhan and the other in Sinjar, will the displaced Yazidis follow Sheikhan's or Sinjar’s prince upon their return? With the rise of a third emirate in Germany, Yazidis are facing three choices: remain in the Iraqi Kurdistan Region, return to Sinjar or emigrate from Iraq to Germany. Each prince represents a choice for the confused Yazidis.