Four years after the genocide against them, Yazidis mark its anniversary without a noticeable improvement in their situation. 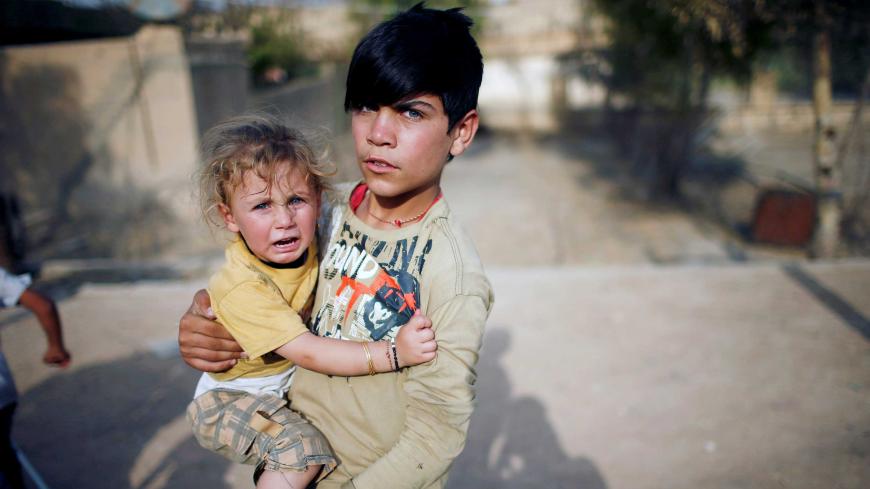 A Yazidi boy holds his sister in a playground in the Sinjar region, Iraq, Aug. 2, 2017. - REUTERS/Suhaib Salem

DAHUK, Iraq — Statistics regrettably point to the tragedy the Yazidi religious minority has been enduring, four years after it experienced genocide.

Khairi Bozani, director of Yazidi affairs at the Kurdistan Regional Government's (KRG) Ministry of Endowments, told Al-Monitor, “Around 360,000 out of 550,000 Yazidis in Iraq were displaced. During the first few days that followed the Islamic State (IS) invasion, 1,293 were killed. The genocide left behind 2,745 orphans. IS kidnapped 6,417 Yazidis, 3,548 of whom were women and 2,869 were men.”

He said, “After Sinjar was liberated, we counted 69 mass graves, as well as dozens of individual burial sites. We also found out that IS bombed 68 religious shrines.”

However, Bozani said the most serious issue was that all these incidents forced around 100,000 Yazidis to leave Iraq for good, which further diminishes the demographic weight of this minority.

Salam Haskani, one of the young people who set up the symbolic burial of the UN, told Al-Monitor, “The tragic situation of the Yazidis has failed to change for the better. It has been four years since the genocide was committed, four years since the Iraqi army was defeated and the peshmerga withdrew their forces. Still, not one official has been held accountable. Perpetrators were never punished and victims were never avenged. Sinjar remains completely destroyed. The displaced have not returned to their towns and villages, and the Yazidis continue to migrate.”

Yazidi elites also feel despair when it comes to lack of intervention on the part of the international community and the Iraqi authorities.

Kulu Abdo Suleiman, a Yazidi official in Sinjar, said the Yazidis have lost their sense of citizenship along with the belief that the state is able to protect them. They no longer feel as part of this people, he said.

Suleiman told Al-Monitor that Yazidis need to first find a way to trust other parts of Iraqi society again, as well as the state, in order for their faith in their national identity to be restored.

Citizens commemorated the genocide in different areas around Iraq. Most importantly, a conference was held by Yazda on Aug. 3 in Baghdad, headed by President Fuad Masum.

Genocide survivor Farida Abbas, who gave a speech at the conference, said, “Our demands focus on unconditional justice.” She told Al-Monitor that justice overrides reconciliation. “We cannot agree to reconcile or make peace with those who killed our children and put our lives to waste.”

Also, an academic conference involving experts from several countries began in Erbil on Aug. 8. It is hosted by RUDAW, a research and media institute in Kurdistan.

Hasso Hormi, head of the Yezidi Foundation in the Netherlands, who participated in the conference, told Al-Monitor, “This will not be a mere occasion to commemorate the Yazidi genocide; simply because this genocide is still ongoing. Yazidi girls are still under IS’ grip and the children who were kidnapped by the group are still forcibly kept away from their community, being transformed into human suicide bombs.”

Hormi said that top legal, political and cultural means should be considered to prevent a recurrence. The best way to do so, he said, is to internationalize the Yazidi cause by forming an anti-genocide committee with the help of experts and researchers participating in the conference from Ireland, Armenia, India, Bosnia, the Netherlands and many other parts of the world.

Idan Barir, a researcher specializing in Yazidi affairs, said that perhaps the multiple commemorative events held inside and outside of Iraq reflect a division among Yazidis, who failed to hold a unified, central conference in Iraq.

He said it shows how the central government and the KRG have different views regarding the Yazidi cause and the dispute over their areas, namely Sinjar.

However, Yazidi activist Mirza Dinnayi said he believes holding several conferences is a good thing, as it shows that the Yazidi elites, activists and associations are taking matters into their own hands instead of waiting around for parties to take the initiative.

“The positive aspect about all this is that most events had nothing to do with parties. The majority were organized by leaders from the Yazidi civil society,” he said.

Dinnayi said these events represent a new phase for Yazidis. After the war to liberate Mosul, Sinjar and other parts of Iraq from IS, the Yazidis are embarking on a new phase that requires them to emphasize historical events so that victims will never be forgotten, he said. This is particularly true amid concerns that perpetrators will not be subject to a transitional justice process and will not be brought to court. This specifically requires human rights defenders to actively seek to consolidate this genocide in the collective memory.