How this Yazidi man is saving IS captives

Yazidi families in Iraq are paying thousands of dollars to smugglers who rescue their members from the Islamic State’s grip. 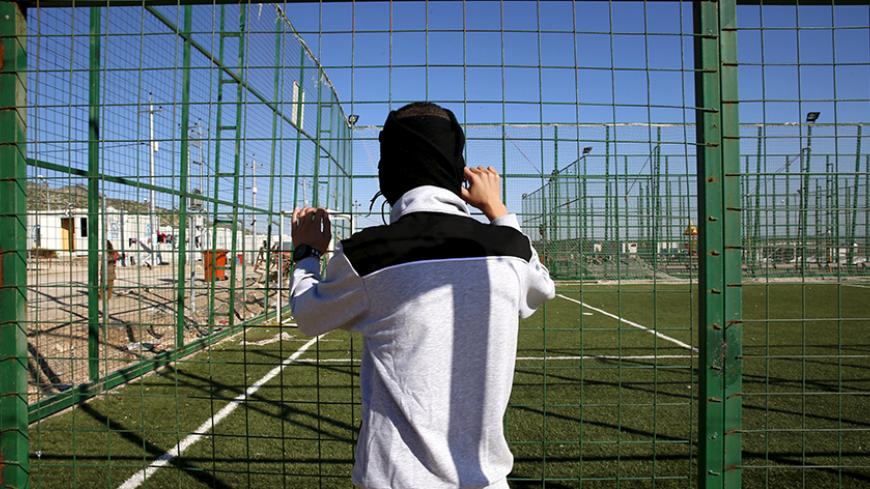 A 16-year-old Yazidi boy, who was held by the Islamic State, wraps his head in a scarf as he stands by the fence of a playground at a refugee camp near the northern Iraqi city of Dahuk, April 19, 2016. - REUTERS/Ahmed Jadallah

It had been the hundredth time he heard the ringtone that day. The middle-aged man, who wears rectangular glasses and a black mustache, immediately answered his phone. A rescue operation is in the making.

“Even the Islamic State [IS] knows my phone number now,” Hassan said as he hung up his mobile. “They don’t like me very much,” he added. And with good reason: His job is to free Yazidis kidnapped by IS.

Hassan, who lives in Iraqi Kurdistan, defines himself as a former businessman with contacts across Syria who now coordinates a network of two dozen smugglers who used to traffic cigarettes. But smuggling humans out of IS-held territories proved to be way more lucrative. The Kurdish Regional Government (KRG) in Iraq and Yazidi families pay smugglers thousands of dollars to rescue those who were abducted.

These men are also very much aware they are taking enormous risks. Twelve of his contacts were beheaded, according to Hassan. Others were thrown in jail.

Despite the threats, he said there is no turning back, especially since more than 30 of his family members are still held prisoner. “I once was standing in a mass grave where some of my relatives had been buried. I was looking at what was left of my family — skeletons — when suddenly I received a phone call from a woman in Syria seeking help. That’s when I decided to never give up,” Hassan said. “That woman and her kids were more important than bones.”

The Yazidi community, which draws some of its beliefs in pre-Islamic religions of ancient Persia, considers Tawusi Melek, the "Peacock Angel," as a central figure of their faith, while IS sees him as an equivalent of Satan. Considered to be “devil worshippers” and idolaters, hundreds of Yazidis were killed and possibly buried in up to 35 mass graves, while thousands were enslaved and over 400,000 had to flee when IS made an unexpected push in Sinjar in the summer of 2014. The terror campaign against Yazidis could be a “genocide,” according to a UN report from March 19, 2015.

The KRG Office of Kidnapping Affairs told Al-Monitor that 2,578 abducted Yazidis returned home from October 2014 to date and more than 1,000 of them had been rescued directly by their office, which works with a network of smugglers and middlemen, including Hassan. More than 3,000 Yazidis remain captive, mostly in or around Mosul, Tal Afar and Raqqa, IS’ de facto capital in Syria.

Rescue operations have also been carried out by the US-backed Syrian Kurdish People's Protection Units (YPG) militia, the armed wing of the Democratic Union Party (PYD) in Rojava, the Kurdish region of Syria. On March 23, 53 women and children who had been held captive in a basement in Raqqa for nearly four months were freed in what appears to have been an exchange of prisoners between the YPG and IS, Hassan, an NGO official and women who were part of the group told Al-Monitor.

Hassan claims to have organized the liberation of 247 Yazidis, including 24 of his relatives.

At one point, when his sister Jihane finally got access to a mobile phone, she called the only man she knew could help.

Jihane and her son Amir, 6, were captured when the jihadis swept across the border from Syria into Iraq and seized her village early one summer morning. They managed to escape the first assault but were eventually captured hours later. That’s the last time she saw her husband. That same day, she was sent with Amir and her sister-in-law to Mosul, where she was sold on a slave market and later sent to Ramadi. There, she was forcibly “married” to an IS militant.

For her to escape, Jihane’s relatives had to pay $15,000 to one of her brother’s smugglers. “He came with his family in a pickup around 6 p.m. He told me to wear black and to come with him,” Jihane recalled. She ran away while her enslaver was not home.

“At the checkpoint, [IS militants] asked us where we were going. He [the smuggler] told them we were his family and that we were going to see a doctor in Syria,” she explained. Instead, the smuggler took them to Baghdad. She later reunited in Iraqi Kurdistan with her sister-in-law, who had regained her freedom seven months before when her family paid one of Hassan’s smugglers $9,000.

Jihane lives today in a tent with her son and her sister-in-law in the town of Khanke.

Much of the money for the rescues was scraped together from their community.

“There are dozens of families who have tens of thousands of dollars of debt and no way to repay it. They won’t make that much money in 10 years,” said Andrew Slater, a field researcher from Yazda, a US-based NGO dedicated to the Yazidi community. According to Slater, the standard rate for a liberation operation is about $10,000 per person; $20,000 for a woman and two children. “People are making a lot of money out of this. It’s not a charity, it’s a business,” Slater added.

“It has become a business,” confirmed Khairi Bozani, the director of the Yazidi Affairs Department, also in charge of the KRG Office of Kidnapping Affairs, which funds rescue operations. “The smugglers inside IS areas are charging us more and more. … None of the smugglers work for free,” he added.

When people smugglers don’t carry out rescue operations without the jailer knowing, they deal directly with him. They buy a Yazidi girl from her enslaver, who himself bought her from someone else or received her as a gift and is unaware the new buyer is a smuggler, according to Bozani, who denied giving money directly to IS. He argued there is a difference between IS as a terrorist group and the people living within the borders of the “caliphate” who practice slavery freely.

“Some buy girls to serve in the house, some take them as sex slaves, some buy them to work on farms. That way, the Yazidi girls are spread among the community. … From IS’ hands to the community, from the cities to the villages,” he said.

On June 2, UN Secretary-General Ban Ki-moon said in a statement to the Security Council on sexual violence in conflicts that “Daesh [an Arabic acronym for IS], Boko Haram and other extremist groups are using sexual violence as a means of attracting and retaining fighters, and to generate revenue. It is estimated that the Yazidi community gave Daesh up to $45 million in ransom payments in 2014 alone.”

In an open letter on June 6, Bozani called this statement “too vague and uncertain,” accusing Ban of “trying to convert the victim into [an] offender.”

Since the KRG opened an office dedicated to the rescue of abducted Yazidis, $2 million was spent to finance smuggling operations, according to Bozani. The procedure was as follows: If the office did not directly pay for the rescue, families would pay up front and later be reimbursed by the KRG. But since September 2015, funding has dried up, leaving Yazidis crippled with overwhelming debt.

“The KRG announced many things but nothing is happening, whether because they have no more money or are playing political games with the Yazidis,” said Jameel Ghanem Chomer, Yazda manager of operations. “Many people in the Yazidi community are asking the same question: Where is the money?” Chomer added.

When asked the same question, Bozani told Al-Monitor that “close to $1 million” in cash will be given to his office “this week” and is going to be distributed among the families who raised the money by themselves.

As for now, only the enslavers and the smugglers living in IS-held territories are getting paid, while freed Yazidi women who often lost their homes, their husbands, and are traumatized by their captivity, are deeply in debt. “We used to be a happy family and we were doing OK financially,” Jihane said, her son sitting on her lap, speaking from outside a makeshift shelter she had to build herself.

The names of Hassan, Jihane and Amir were changed to protect the identities of the mother and her son.