Teenage Diya Hamad told Al-Monitor the heroic tale of how he rescued his Yazidi friend from abuse by the Islamic State, following her into danger even as his own family reached safety. 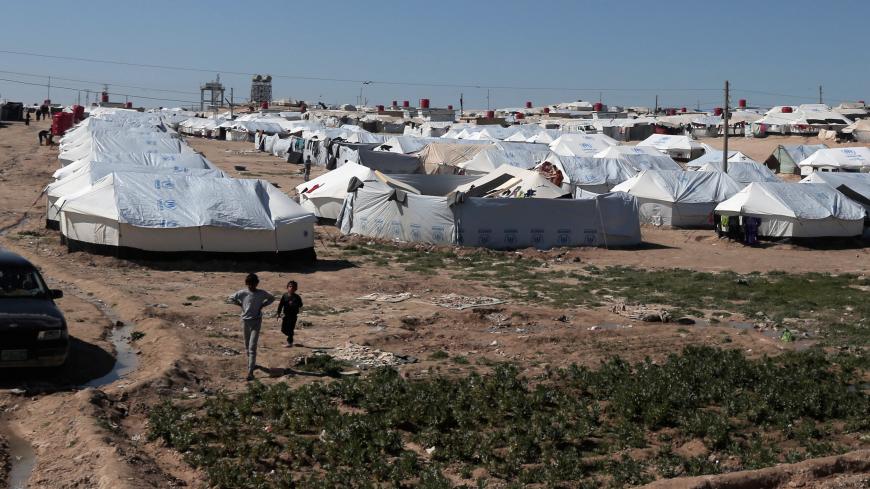 Boys walk at al-Hol displacement camp in Hasaka governorate, Syria March 8, 2019. The camp is home to those who fled Islamic State-held territory, including Yazidi women in children who had been taken captive by the group. - REUTERS/Issam Abdallah

AL-HOL, Syria — With his slender frame and gentle smile, Diya Hamad seems an unlikely self-appointed rescuer of Yazidis from the barbarous Islamic State (IS). But that is precisely what the 16-year-old from the Iraqi city of Samarra is. “He is a hero,” declared Nabil Hassan, the manager of the al-Hol camp in northeastern Syria where tens of thousands of Iraqis fleeing IS have been sheltering ever since the jihadis killed and plundered their way through Iraq in 2014.

Today, al-Hol is home to many more thousands of refugees, the wives and children of IS fighters who made their last unsuccessful stand in the small village of Baghouz. Among them remain an unknown number of Yazidi women they enslaved and abused until they were finally vanquished by the US-backed Syrian Democratic Forces (SDF) on March 22.

Until a month ago, Hamad was among them, hanging on in Baghouz to help a Yazidi woman escape, knowing that he might not be so lucky. But he was. He survived and his mission to rescue the woman called Salwa has been accomplished. She is back with her community.

Hamad’s tale of bravery extends back to 2014, when he, his mother, two brothers and two sisters took refuge in the town of Qaim when IS struck. The jihadis quickly caught up with them. “When we tried to return to Samarra, they said ‘we will kill you’ so we were forced to stay,” Hamad told Al-Monitor on a recent afternoon in al-Hol. That is where he met Salwa.

His face lit up when he recalled their first encounter.

“The minute I saw her, I felt like she was my sister. She was being kept as a slave by a Russian IS member in the house next to ours. He was short and fat and she hated him.” There were 15 other women in the house, all Russians whose husbands were away fighting. As the fat man kept guard over them, he used and abused Salwa. One day she slipped across the garden into Hamad's house and told the family her story. She was terribly lonely because she was unable to communicate with the other women in the house who only spoke Russian. She began coming every day and her tormentor only allowed it because he knew she would not dare to escape. What he didn’t know was that Hamad was determined to make sure that she did.

Salwa is from Iraq’s Sinjar region, where IS embarked on its genocidal slaughter of the Yazidis, an ancient religious minority that has suffered centuries of persecution, largely based on the false premise that they worship the devil. Under this pretext the jihadis decided it was perfectly in order to murder their men and enslave their women en masse.

The scale of the butchery is only beginning to surface. On March 15, Iraqi authorities began to exhume the first mass grave of Yazidis in the village of Kocho, south of Sinjar, where 400 men were killed, leaving only 19 survivors. Women and children were taken captive, among them Nobel laureate Nadia Murad, who has dedicated herself to promoting their cause. A girl who was taken along with Murad that day was recently found in al-Hol. Camp administrators declined to provide her name for security reasons. Publishing Hamad’s photograph, they said, would put him at risk too.

The Yazidis’ exploitation didn’t end with IS. Ziyad Rustam, a spokesman for Yazidi House, an advocacy group in the Kurdish-administered town of Amude in northern Syria, confirmed that smugglers have been extorting money from victims’ families, claiming to have rescued the women themselves even after they were saved by the SDF. For this reason, camp officials are keeping all information about the Yazidis strictly confidential as they continue their search amid the thousands of freshly arrived jihadi women and their children who are stretching camp resources to the bursting point.

“Some of these poor [Yazidi] women and children were kidnapped and held by these villainous profiteers directly from IS and used as servants and sexually abused before being sold back to their own families,” Rustam told Al-Monitor in a telephone interview. “The SDF is the force that protects them,” he said.

Cathy Otten, the author of the widely acclaimed account of the Yazidi tragedy “Ash on Their Faces,” concurred, saying, “It wasn’t uncommon for families to be contacted and extorted all over again either by IS members, criminals or professional smugglers.” She told Al-Monitor, “Cases of extortion appear to have increased in the chaos of IS' collapse. Yazidi families had no choice because there’s never been any official [Iraqi] effort to get the women and children back. So the families had to pay thousands of dollars to smugglers, exortionists and criminals along every step of the journey.”

Hamad was clearly not motivated by money. “I love Salwa; she is like a family member. I could no longer bear the idea of her suffering,” he said over a meal of chicken and rice that he barely touched. Camp officials explain that he has difficulty eating because he was starved in Baghouz for so long. “We became so desperate we picked apart unexploded bombs [mortar shells] and boiled the white powder inside and ate it,” he said. “It made us feel sick.”

How did he wind up in Baghouz? The family's odyssey hadn’t ended in Qaim. When coalition planes began bombing the city, they picked up and left together with IS, crossing the border into al-Keshma in Syria. “We didn’t know what else to do,” he explained. In al-Keshma, Hamad began searching for Salwa. Then one day “God answered our prayers” and she showed up at the family's doorstep accompanied by a jihadi fighter. “When my mother saw her they embraced and they both broke into tears and then for the first time I saw Salwa smile.”

They gave her a room, and Hamad began plotting her rescue in earnest. He managed to spirit her unnoticed to the local bazaar, where they used a merchant’s phone to contact her family, who in turn found a smuggler. But the smuggler was found out by the jihadis and executed. In the meantime, the SDF began closing in and captured the nearby town of Hajin. In a further unlucky twist, Salwa’s “husband,” by then slightly trimmer, turned up to reclaim her. Hamad arranged for his mother and siblings to turn themselves over to the SDF. But he stayed on in the hope of rescuing his adopted Yazidi sister.

Al-Keshma fell to the SDF soon after. Once again he followed the jihadis under a torrent of coalition bombing to Baghouz on the off chance of finding Salwa. He did — in a small tent with the Russian — and then a "miracle” occurred. The man disappeared once again. After three months of living on boiled weeds and a botched attempt to hand her smuggled to safety, Hamad finally managed to engineer their escape to the SDF lines as panic set in among the jihadis. They went in a car but were separated as soon as they turned themselves over.

“They said I was from the Islamic State.” And so it was Salwa’s turn to rescue Hamad. She told them their story. Soon Hamad was reunited with his beloved Salwa and the rest of his family in al-Hol and Salwa is now reunited with hers.

“I hope to visit her in Sinjar. That is my dream,” Hamad said.

Until then, he won't know the full truth of her reception back home. Rustam said that some Yazidi victims resist returning because of the stigma of being an IS slave. Others leave children conceived from such forced unions behind. Otten observed, “On a surface level, formerly enslaved women have been accepted back by Yazidi officialdom, but in practice things are rarely so straight. Yazidism is a hugely conservative and insular religion and Yazidis have the same sense of shame and honor as other religious groups in the region.” Salwa’s troubles may not be over yet.