In the absence of local and international authorities, the Yazidis continue buying back their kidnapped women and children. 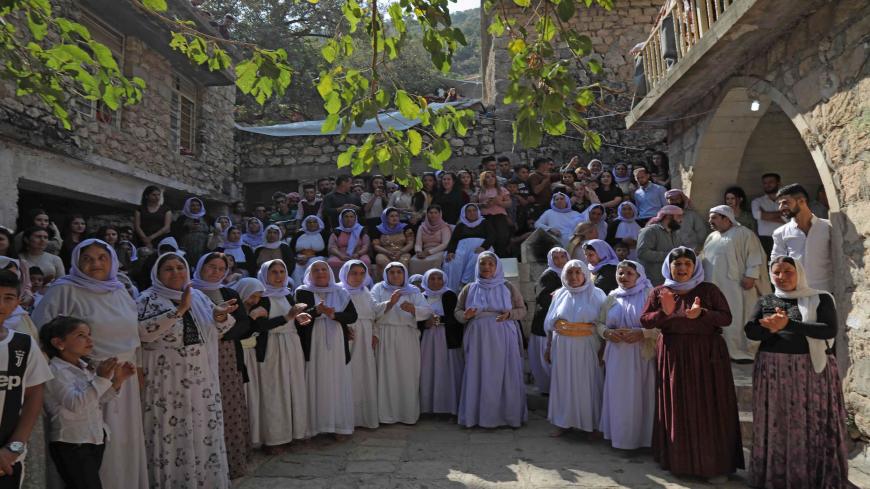 Iraqi Yazidis take part in a religious ceremony at the Temple of Lalish, in a valley near the Kurdish city of Dahuk, about 430 kilometers (267 miles) northwest of the Iraqi capital Baghdad, Iraq, Oct. 10, 2019. - Photo by SAFIN HAMED / AFP via Getty Images

On the morning of June 4, Ali Hussein was sitting in his car staring at the latest message on his phone sent by a mediator who is helping free six members of his family. The message said the Syrian armed faction was demanding $90,000 for his family members abducted in August 2014 from Sinjar, northern Iraq.

Hussein himself was kidnapped by the Islamic State (IS) and managed to escape alive. He then decided to help rescue other Yazidis kidnapped by IS. According to the Kidnapped Yazidis Rescue Office based in the city of Dahok in the Kurdistan Region of Iraq, around 2,800 Yazidis were kidnapped by IS and other extremist factions in Syria.

Ali Hussein al-Khansuri, who helped save dozens of Yazidi women and children, told Al-Monitor that rescue operations, which often involve buying back the kidnapped, are still ongoing, in particular in Idlib where Yazidi women and children are still held by IS and extremist factions. He said that the process of buying and selling Yazidis has turned into a trade, and that some Yazidis are sold several times in exchange for higher amounts.

He recounted how his cousin Aziza was brought back home at the beginning of the year. The phone messages exchanged show the purchase process and details of the delivery of the agreed amount. The parties to this sale agreed that $25,000 would be handed over upon Aziza's release and $15,000 would be paid a month later.

The messages also indicate that a mediator would go to the village of Abu Hassan, also called al-Baqan, near the Syrian Hajin area to pick up Aziza. The family was told not to contact another mediator to try reduce the total price of $40,000.

“Aziza was bought back after the amount agreed upon with IS was paid,” Khansuri said. “She went back home to the Kurdistan Region after being handed over [to the family] by the Kurdish-led autonomous administration in northeastern Syria.”

The media officer of the Kidnapped Yazidis Rescue Office, Maysar al-Adani, told Al-Monitor that they seek to free Yazidis kidnapped by IS through communication networks with mediators. The office opened at the beginning of October 2014.

“The office started operating after establishing a complete database of the Yazidis kidnapped by IS on Aug. 3, 2014,” he said.

He noted that the Kidnapped Yazidis Rescue Office provides financial and moral support to the families of the kidnapped after their liberation. “The money [to secure their release] is sent by the private office of the KRG president. The office facilitates the survivors’ affairs at the state departments through coordination with the competent authorities. It also provides them with health and psychological support through the survivors support center in Dahok. In addition, the office archives and documents information on all survivors, relays their messages to the decision-making quarters and gets them help from civil organizations.”

Adani said, “Large amounts have been paid over the past few years for the liberation of Yazidis. I don't know the exact amount, but I know it is substantial — amid a lack of support from the central Iraqi government, which has not yet contacted us about the survivors.”

Barakat Isa, a Yazidi media figure, believes that the buying and selling of the Yazidis has become a source of income for several factions and terrorist groups that are not affiliated with IS, in collaboration with Arab tribes in Iraq and Syria. He noted that the prevailing chaos on the Iraqi-Syrian border — amid a lack of control and supervision on the Iraqi side — has encouraged human trafficking. He added that some IS members have been benefitting from this lucrative trade since the establishment of IS in Syria and Iraq until this day.

“If IS has been militarily eradicated who is hiding the more than 1,000 Yazidis? Who are they being bought from? And why are those traders not being investigated,” Isa concluded.