After the death of the spiritual leader of the Yazidi sect in Iraq and the world, differences come up over the selection of his successor. 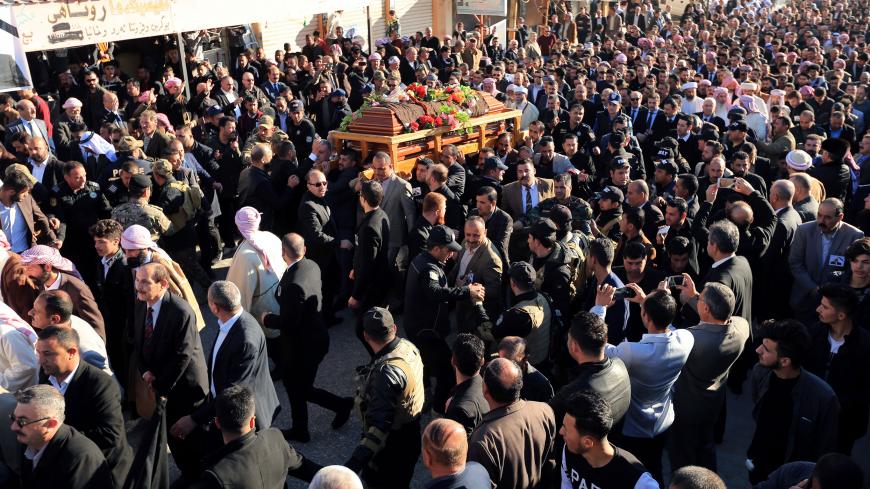 ERBIL, Iraq — Yazidi Prince Tahseen Said died in a hospital in Germany Jan. 28 at the age of 86 after a long struggle with illness. His death launched a debate about his potential successor in the international Yazidi community. The debate revealed strong divisions over the leadership of this minority group that lived through a genocide perpetrated by the Islamic State in the summer of 2014.

The prince's remains reached Iraqi Kurdistan Feb. 4. Officials from both the Baghdad and Erbil governments attended the funeral. Prince Tahseen was buried in his hometown of Baadra in the Shekhan district of the Ninevah governorate.

Prince Tahseen was born Aug. 15, 1933. He was crowned prince of the Yazidis following the nomination of his grandmother, Princess Meyan Khatun, and the approval of the government of the Kingdom of Iraq. After his father, Prince Saied Ali Bek, died in 1944, he took over and led the Yazidis for more than seven decades.

The prince did not nominate a leader of the Yazidi emirate — a social and symbolic entity — or a successor to the throne. The void left the Yazidi community filled with uncertainty.

Some Yazidi writers have suggested organizing elections for the Yazidis of Syria, Iraq, Turkey and Georgia to vote for their new prince. While there is no standard for choosing a new prince, those writers have suggested that an oversight committee be formed to run the elections. Then, once the new prince is chosen, he would choose two of the royal line to succeed him. He would then assign a successor and a delegate. This could be a way to preserve the Yazidi emirate and avoid clashes and divisions.

Six candidates nominated themselves to succeed the prince. Yazidi writer Saman Dawed revealed the names of those candidates. Each candidate is backed and campaigned for by a group of Yazidis on social media. Dawed believes that the two biggest names are the prince’s eldest son and fiduciary, Prince Hazim Tahseen Bek, and his youngest brother, Prince Ismat Tahseen Bek.

According to Dawed, Ismat has been better received by the public. Yet the eldest is more powerful, as he enjoys political support from the Kurdistan Democratic Party.

Yazidi Princess Oroub Ismail told Al-Monitor it should be possible to nominate a princess to lead the Yazidis. She believes that women could lead the Yazidi community better than men if they are given the chance. Men have recently failed to protect the Yazidis from genocide. The princess expressed her interest in putting her candidacy to lead the Yazidi emirate if the competition were fair and transparent.

A number of Yazidi intellectuals issued a statement regarding the future of the royal family. They wrote that there should be a consensus on the successor and that the Yazidis should follow the established norms of the emirate dictating that both parents of the chosen prince be of the royal line.

The statement called on the “Yazidi community, the Spiritual Council and the royal family to unite their discourse on the matter and respect the fundamental norms that the Yazidi emirate was founded on.”

The statement concluded with the hope that “the choice will be made away from the external influences, whatever their sources are. The new prince must represent the will of the Yazidis and reflect their aspirations.”

Dawed pointed out that the insistence of the educated elite on a prince of pure royal descent poses complications. Neither Hazim nor Ismat satisfies the condition, which may lead to the nomination of other descendants, such as the diplomat and grandson of the prince, Prince Breen Said Tahseen Bek.

Yet Khalil Jindy, a Yazidi author and researcher, believes that politics will dominate when choosing a successor. For example, when the late prince was appointed in 1944, he was supported by the kingdom’s government at the time. Another component was the support of the Baath Party, which took power in 1968. The Baath Party nominated Bayezid Ismail Bek as prince. At the time, the Yazidi community could do nothing but comply with the political pressure.

Jindy believes that since the Yazidis and the royal family are located within areas where the Kurdistan Democratic Party is powerful, the latter will surely have a strong say regarding the nomination of a new successor. They certainly want someone who supports their politics. Because of this influence, the new prince will be weak and lack the power to resist political pressure. Local matters will become more complicated, and the Yazidi community will become even more divided, with more insurgent groups working against the new prince.

For the Yazidi community to overcome its current situation, Jindy suggests that the new prince, the Spiritual Council and the Yazidi elite reform the Yazidi spiritual institution by adopting modern methods for electing a leader. They must shift the decision-making power from individuals to institutions so that it will become harder to make unilateral decisions and possible to protect the process from outside influence. A parliament or assembly is also needed. Such a body should include Yazidi representatives from different areas within Iraq and the Kurdistan region. Without these changes, the emirate will remain weak.

Yazidi elites who are keen to protect Yazidi unity and identity agree with Jindy.