Patriotism courses for Egyptians abroad highlight the Egyptian state's achievements and national projects, and emphasize the importance of disseminating the right information about Egypt and countering those who spread negative ideas and rumors. 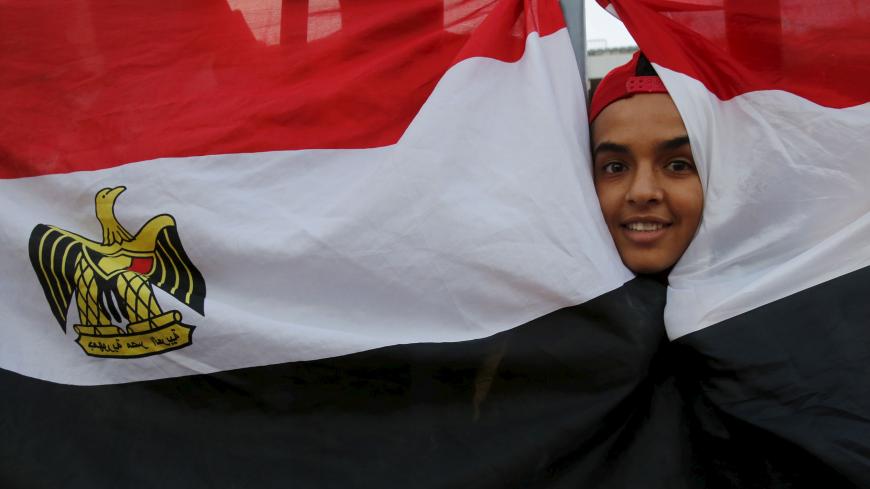 An Egyptian fan looks through the national flag before a 2018 World Cup qualifying soccer match against Chad, at the Borg El Arab in Alexandria, Egypt, Nov. 17, 2015. - REUTERS/Amr Abdallah Dalsh

CAIRO — Egypt’s Immigration Minister Nabila Makram said Aug. 1 that she seeks to help young Egyptians living abroad not to be intellectually influenced by thoughts against their homeland.

To accomplish this, she said, the ministry will be offering free courses on national security for Egyptian academics and students at Egyptian embassies abroad. These courses aim to introduce young Egyptians to the development projects the Egyptian state is undertaking as part of its 2030 vision and to improve the image they have of their homeland.

Makram was speaking on the sidelines of a competition to capture the best photo of an Egyptian tourist site at a summer camp for expats organized by the ministry in Sharm el-Sheikh. In response to a question on how to involve older youths in the ministry’s summer camps, she said that dealing with young Egyptian adults abroad would be delicate given the vulnerability of this age group.

She stressed that Egyptians abroad are Egypt’s ambassadors and representatives, which is why the ministry is seeking through its activities and camps to convey to them the image of Egypt it wants to show the world.

She said that the ministry is focusing on and interested in young Egyptians ages between 20 and late 30s as well as students abroad. She noted that these young Egyptians play a major role in refuting false news and rumors about the Egyptian state, and added that they play a role in raising awareness among their peers about the achievements and national projects of the Egyptian state.

“The era of traditional war is over. Egypt is now facing a new type of war — a war of rumors targeting young Egyptians abroad and influencing them intellectually to turn them against their homeland,” she added.

A well-informed government source within the Immigration Ministry said that the ministry has indeed prepared a comprehensive program to organize patriotism courses and special camps for young Egyptians and academics studying abroad in order to strengthen their sense of Egyptian patriotism.

The source told Al-Monitor on condition of anonymity that the content of these courses focuses on shedding light on the Egyptian state's achievements and national projects, stressing the importance of disseminating the right information about Egypt and responding to those spreading negative information and rumors about the economic and social conditions in the country.

Asserting that the ministry prepared this program with specialists in history and sociology and various security leaders, the source explained that the objective is to introduce concepts of national security and protect young people abroad from the dangers of being intellectually influenced.

“The ministry is currently coordinating with Egyptian communities through embassies in Western countries on these courses,” the source said, noting that the program kicked off in Canada and will subsequently be offered in other countries.

The source added, “The ministry wants to hold these specialized patriotism courses in light of the fear that Egyptian youths abroad are recruited to act as agents for other countries against Egypt or disseminate false ideas abroad among Egyptians. This requires providing the youths abroad with the right information to keep them from falling prey to external parties that aim at spreading false information about Egypt.”

Noting that these courses are optional at the moment, the source said that they are mandatory for some members of the Egyptian embassies abroad so that they can communicate efficiently with the Egyptian expats.

The source noted that the ministry is offering these courses as eight sessions of two hours per day. The courses are intensive given the fact that students are often overwhelmed with their academic work and the hectic lifestyle in Western countries.

Said Sadek, a professor of political sociology at the American University in Cairo, described these courses as an attempt of intellectual recruitment of young people. He believes in freedom of thought and that no individual should be misguided to be biased to any party.

He said in a telephone interview with Al-Monitor, “A distinction must be made between courses on Egypt’s history and civilization and other courses aimed to recruit the youths contrary to the idea of ​​educating young people about their history. Such courses are tantamount to latent recruitment attempts.”

An Egyptian researcher at the University of Ottawa told Al-Monitor on condition of anonymity that she had heard of these courses through her academic friends in Canada. “Such courses cannot be efficient among young Egyptians abroad because they are used to a more open lifestyle in Western countries and a freer environment that refutes all attempts of intellectual control over citizens," she said.

Describing these courses as aimed at intellectually recruiting and stereotyping Egyptian youths, she noted that she does not want to enroll in any of these courses. Yet she welcomed any scientific seminars or courses on the civilization and history of Egypt.