Egypt’s minister of immigration and expatriate affairs called for the unification of entities representing the Egyptian diaspora abroad under one association, an idea that was objected to by some given the obstacles it would face. 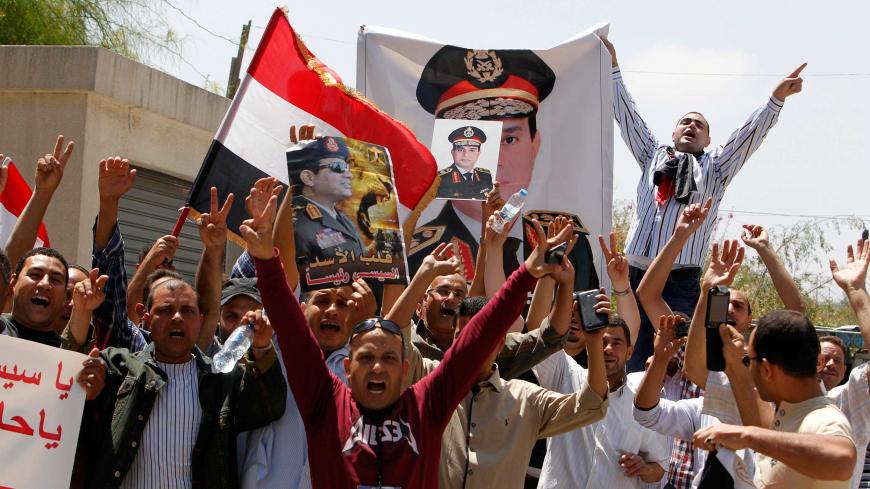 Egyptian expatriates living in Lebanon shout slogans in support of Egypt's presidential candidate and former army chief Abdel Fattah al-Sisi, as they hold an Egyptian flag along with pictures of Sisi in front of the Egyptian embassy in Beirut, Lebanon, May 15, 2014. - REUTERS/Sharif Karim

CAIRO — Public diplomacy was the political regime’s weapon in 2014-2016 when Egyptians rallied abroad to assert the popularity of President Abdel Fattah al-Sisi when he visited New York, Berlin and Paris, among other European capitals. At the time, the Muslim Brotherhood was trying to show the international community that Sisi’s regime acceded to power in the wake of an illegitimate military coup by spreading rumors about the current regime and rallying against Sisi. Today, Egypt is seemingly capitalizing on promoting public diplomacy through a draft law to unite organizations regulating the affairs of Egyptian expatriates. Minister of Immigration and Expatriate Affairs Nabila Makram proposed the draft law in September.

On Sept. 25, Makram met with Minister of Justice Hussam Abdul Rahim to discuss issuing a law that would regulate and unite Egyptian organizations abroad. Makram lauded the role of Egyptian expatriates and voiced her strong faith in public diplomacy, which she said goes hand in hand with official diplomacy. She also praised the efforts of associations and entities representing Egyptian expatriates to support the state, organize it and focus on the national objectives.

Makram said she would communicate with members of parliament representing Egyptians abroad to get their perspective on organizing the bodies representing expatriates. She underlined the need to benefit from international models regulating the affairs of expats — such as the Moroccan, Sudanese, Mexican and Lebanese models — before submitting to parliament the proposal of the Ministry of Immigration and Expatriate Affairs.

On Sept. 20, Makram said in a press statement, “There are many bodies representing Egyptian expatriates such as the Egyptian clubs abroad, the General Syndicate for Egyptians Working Abroad, the diaspora and the official spokesperson for the Egyptian diaspora. The multitude of expatriate bodies prompted the ministry to call on them to unite to serve the state. The ministry is preparing a draft law to submit to the Cabinet and parliament to organize these bodies.”

She added, “When I went to Sudan and met with the Sudanese minister of immigration, he told me that each committee representing the Sudanese diaspora has its own records of all cultural and social activities.”

For that reason, the draft law would help organize the bodies representing Egyptians abroad and would frame their activities and regulate the election of a board under one association. The association would also be registered at the Ministry of Social Solidarity in order to represent Egypt in an organized way, according to Makram.

The draft law was proposed in the wake of Sisi’s visit to New York to attend the 72nd session of the UN General Assembly. Hundreds of Egyptians rallied in front of the UN headquarters on Sept. 19 to welcome Sisi and voice their support for him and for Egypt.

The draft law elicited different opinions. Member of parliament Mohammad al-Arabi, the head of the parliamentary Foreign Relations Committee, told Al-Monitor, “Egyptians do not like to be linked to one law or body — they might face disputes. Besides, it is difficult to implement the proposed draft law because Egyptians abroad have to comply with the laws of the country they reside in. But the organizations representing Egyptian expats can have their affairs regulated by the Ministry of Immigration and Expatriate Affairs when it comes to big projects. This was the case when investment certificates that partly funded the new Suez Canal project were purchased.”

Parliamentarian Evelyn Matta, a member of the Foreign Affairs Committee, told Al-Monitor, “Uniting Egyptians under one body would give this body more power due to the number of its members and their diversified jobs. Consequently this body would have more power to pressure some companies and foreign organizations that do not honor the rights of Egyptian workers and to defend the rights of Egyptians if an Egyptian was abused or rights were violated.”

The head of the Egyptian Community in Europe, Walaa Morsi, told Al-Monitor, “As a matter of principle, the draft law makes sense. But practically, its implementation is hard. To apply it correctly, Makram should connect with the organizations representing the Egyptian diaspora, but she refuses to deal with some organizations that criticize her, and she objects to some situations of Egyptians abroad. Thus the united body would only include supporters of the minister and her policy.”

The General Syndicate for Egyptians Working Abroad and the Egyptian Community in Europe criticize Makram’s position on repatriating the bodies of Egyptians who died abroad, as the Ministry of Immigration and Expatriate Affairs does not cover the expenses of transporting the bodies to Egypt if the family does not have the funds. The ministry was also criticized for failing to efficiently handle the expulsion of Egyptian workers from the Gulf following the breaking of ties with Doha in June.

The head of the Saudi Arabia branch of the General Union of Egyptians Abroad, Imam Youssef, told Al-Monitor, “Makram’s proposal is surreal because she cannot force Egyptian associations abroad to comply with Egyptian laws. Each organization abides by the applicable laws in the country where it is based. Makram is overlooking the associations that do not want to comply with her instructions. We suggested to the ministry several times that it record the data of those joining the Union of Egyptians in Saudi Arabia, but the ministry was not interested.”

A pro-Brotherhood Egyptian living in New York who refused to reveal his full name told Al-Monitor through Facebook messenger, “I expect the united body will enjoy the support of the state in offering health insurance to Egyptians abroad and covering the cost of transferring the bodies of deceased Egyptians back home, among other services. This would encourage Egyptians to join the body. I, along with other Egyptians in the US who oppose the current regime, feel the body's main objective is to identify the opponents of the regime in Egypt from the Brotherhood or other organizations abroad, because most opponents do not register at the Egyptian embassies or consulates. The body could also play a role in garnering Egyptian support for Sisi in the upcoming elections.”

The Egyptian lobby idea, as described by Matta, is facing several obstacles. For one, its implementation is not straightforward because some associations representing Egyptians abroad are at odds with Makram. Besides, laws change from one country to another where the associations are based, and some people are concerned that a united body might be a trap for the opponents of the regime to track them down and detect their activities. It is undeniable, however, that the draft law has diplomatic and investment privileges, in addition to its contribution to defending Egyptians’ rights.