Will Egypt's greenhouse project mark a leap in agricultural sector?

The Egyptian army is behind a project to build thousands of greenhouses nationwide, which raised criticism over the army’s role in the agricultural sector. 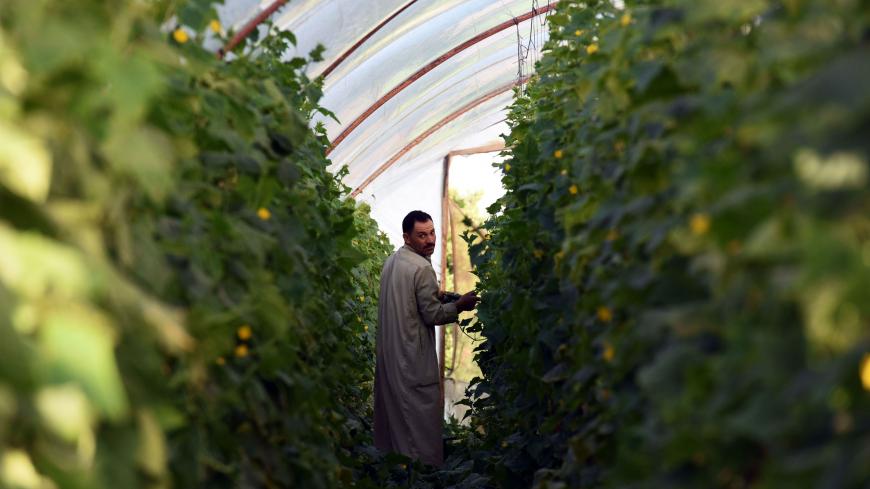 A farmer picks cucumbers in a greenhouse near the village of Kafr Daud, north of Cairo, Egypt, April 2, 2016. - MOHAMED EL-SHAHED/AFP/Getty Images

Egyptian President Abdel Fattah al-Sisi on Aug. 17 inaugurated 1,300 greenhouse facilities established over an area of 10,000 feddans (10,378 acres) in Marsa Matrouh governorate in Egypt's Western Desert as part of the national project to build 100,000 greenhouses to meet the needs of 20 million of the country's 100 million citizens.

The project is being implemented by the National Company for Protected Crops, which is affiliated with the Armed Forces National Service Projects Organization; this has raised questions about the extent of military participation in agriculture.

The armed forces' involvement in agriculture started in 2015 with the launch of the 1.5 million Feddan Project, which aims to increase Egypt's farmland by 20%, from 8 million to 9.5 million feddans.

The greenhouse project is part of this mega project.

Sisi said in his Aug. 17 speech that armed forces' involvement in agriculture won't exceed 10% to 15% of the country’s overall projects, adding that this percentage is not huge. He said the involvement of the Armed Forces National Service Projects Organization "is of paramount importance to control the market and achieve balance for the Egyptian market. Small farmers also should work hand in hand with us. We won't reach agreements with traders at the expense of people. And, we won’t get into inappropriate debate.”

A farmer from the New Valley governorate who declined to give his name said he feared that small farmers' rights will be overlooked. “We are the ones who work and cultivate those lands. I hope that my fears are baseless. Whether the armed forces or public sector get involved in agriculture, farmers should be the top priority,” he told Al-Monitor.

Generally speaking, the 100,000 greenhouse facilities are to be established in several areas nationwide, including 10th of Ramadan City on the outskirts of Cairo, El-Adwa in Upper Egypt's Minya governorate, Hammam in Marsa Matrouh governorate, El-Lahun village in Fayoum governorate, Abu Sultan and El-Amal village in Ismailiya governorate and El-Fashn city in Beni Suef governorate.

Addressing those attending the inauguration ceremony, Amin said the project aims to establish integrated agricultural communities, produce high-quality agricultural products and maximize the utilization of the land and water. It also will significantly contribute to the increase of Egyptian agricultural exports as well as providing new job opportunities, he added.

“High-tech greenhouses rationalize 80% of irrigation water, with productivity estimated at four times that of open fields,” he said.

Amin said the Marsa Matrouh project is expected to grow around 184,000 tons of vegetables annually.

The head of the Farmers’ Union, Hussein Abu Saddam, told Al-Monitor, “The armed forces launched this project to solve a domestic problem, namely, the lack of crops. The armed forces will not compete with or harm the farmers or investors. We are Egyptians. President Sisi urged the private sector, public sector and farmers to combine efforts to revive the agricultural sector. We are cooperating, not competing,”

Abu Saddam said the yield from these greenhouses will only be 5% to 10% of total production. “Therefore, we should not exaggerate and say farmers will be harmed by the armed forces' agricultural projects,” he said.

Sisi inaugurated the first phase of the Marsa Matrouh project in February 2018 at the Mohammed Naguib base in the el-Hammam area. The area of each greenhouse facility is estimated at 3 to 12 feddans.

Presidential spokesperson Bassam Radi said in February 2018 in the wake of the inauguration of the first phase that this project is the largest in the field of greenhouses in the Middle East, aims to contribute to achieving food security and to bridge the gap between production and demand.

In December 2018, Sisi inaugurated the second phase of the project, including 7,100 greenhouse facilities over an area of 34,000 feddans in 10th of Ramadan City.

“The greenhouse project will help rationalize water consumption in light of the numerous water challenges facing the country. Greenhouses' water consumption is 40% less than cultivation in open fields on the same area,” Abu Saddam said.

He also said greenhouses are not the only way to revive the agricultural sector, and that they have their limits. “I know that long crops like the majority of fruits cannot be cultivated in greenhouses. But in Egypt we do not suffer from lack of fruits or vegetables. We already export them,” Abu Saddam said.

Ahmed el-Dawwi, a member of parliament's Agriculture and Irrigation Committee, told Al-Monitor that the greenhouses were established in accordance with the world's most up-to-date technologies.

“Modern technology will help increase productivity besides paving the way for cultivating many crops in the off-season,” Dawwi said.

Egypt, in particular, requires adopting such modern approaches in agriculture since it suffers from overpopulation. Meanwhile, many areas previously devoted to farming are being lost to urban expansion. Hence, resorting to modern techniques, including greenhouses, has become inevitable, Dawwi said.

Dawwi expressed his hope that all the country's hinterlands, especially in Upper Egypt, will be exploited. “I hope that the greenhouse project will further expand to include more areas,” he said.