Egyptian security forces killed 17 suspects they say were involved in a car bomb that killed more than 20 people in Cairo, raising questions about the operation, which happened quickly. 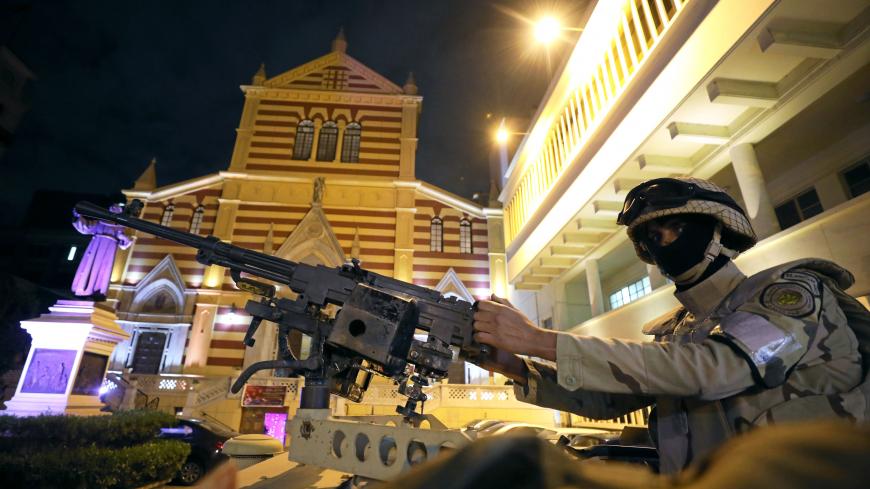 The Egyptian Ministry of Interior announced on Aug. 8 that it had killed 17 people it said were suspects in the Aug. 4 bombing near the National Cancer Institute (NCI), one of the largest cancer treatment hospitals located on the Nile River near central historic Cairo.

It all began late in the evening on Aug. 4 when a car packed with explosives driving in the wrong direction collided with another car in front of the NCI, resulting in a huge fire.

The explosion affected passing pedestrians, hospital patients and motorists; 23 people were killed, including 15 members of the same family who were in a small bus that exploded in the accident. More than 46 people were also injured.

The Interior Ministry said at first the explosion was caused by two cars colliding in front of the NCI. It did not mention a terrorist act or premeditated bombing.

But a few hours after the incident, President Abdel Fattah al-Sisi took to his Facebook page to mourn the victims of what he called a “cowardly terrorist incident.”

Sisi’s post read, “I extend my sincere condolences to the Egyptian people and to the families of the martyrs who died as a result of the cowardly terrorist incident in the vicinity of Qasr al-Aini last night, and I wish the injured a fast recovery. I stress that the Egyptian state, with all its institutions, is determined to confront and root out brutal terrorism, armed with the strength and will of its great people.”

After Sisi’s post, the Interior Ministry announced that the incident was a terrorist attack.

Four days after the attack, the Ministry of Interior issued another statement, a copy of which Al-Monitor received by email, saying it had killed 17 suspects from the Hasm movement, which is linked to the Muslim Brotherhood.

According to the Interior Ministry, security forces first conducted a raid in the Fayoum governorate, about 90 kilometers (55 miles) from Cairo, on hideouts used by fugitives from other terrorist cases whom the Interior Ministry had linked to the NCI incident. Clashes broke out during the raid, killing eight suspects.

Security forces then killed seven accused terrorists in a raid on a second group of suspects in Shorouk city, about 20 kilometers (12 miles) from the capital.

During the raid, two other suspects were killed when one attempted to hide in the house of another suspect to avoid arrest in Helwan city, south of Cairo.

The Interior Ministry did not report injuries among its personnel.

An informed security source told Al-Monitor on condition of anonymity that after the explosion, the Ministry of Interior “started the criminal investigation process until it reached the identity of one of the suspects.”

The source said, “The suspect was then arrested from his home in the suburbs of Cairo and gave away the names of those involved in the NCI bombing."

The security source denied that what happened was extrajudicial killing, saying, “These people are accused in terrorist operations, and they had to be dealt with all firmness and force, especially since they fired first.”

Abdul Ghaffar Salehin, a Brotherhood leader who fled to Turkey in 2015, told Al-Monitor over the phone that the Ministry of Interior eliminated the 17 suspects via extrajudicial killing.

He said it is unreasonable for 17 people to die in confrontations with security services without any police officer getting a scratch, especially since both sides usually suffer losses as a result of exchanging fire.

Salehin added, “This is not the first time the Ministry of Interior has eliminated suspects whose innocence could be proven after investigation. The same happened with the killing of Brotherhood lawyer Nasser al-Houfi, whose house was raided. He was killed along with Brotherhood leaders without even resisting. Yet the Ministry of Interior claimed it was the result of clashes.”

Houfi and nine other Brotherhood leaders were killed inside his home in 6th of October City in July 2015, while the Interior Ministry said the killing was the result of an exchange of fire between security forces and Brotherhood members. But the Muslim Brotherhood denied any clashes.

“It makes no sense to identify all suspects and locate them in less than two days, and still, the security services killed them in cold blood,” Salehin said.

In March 2019, the US Department of State issued a report on the 2018 human rights situation in Egypt, showing that Egypt has witnessed arbitrary arrests and extrajudicial killings as part of a wide range of human rights violations.

Anas Sayed, director of the trial monitoring project at the Cairo-based Egyptian Commission for Rights and Freedoms, told Al-Monitor, “Any killings by law enforcement officers without trial are extrajudicial killings.”

He added, “We have deficiencies in the legislation, as the law does not hold law enforcement officers accountable in such cases,” stressing the need to follow international standards during security raids by filming the operation in the presence of the media.”

Sayed reiterated, “The killing of the 17 suspects was extrajudicial killing.”