Egyptians are speculating about why the president has yet to appoint a vice president to fill in for him if necessary. 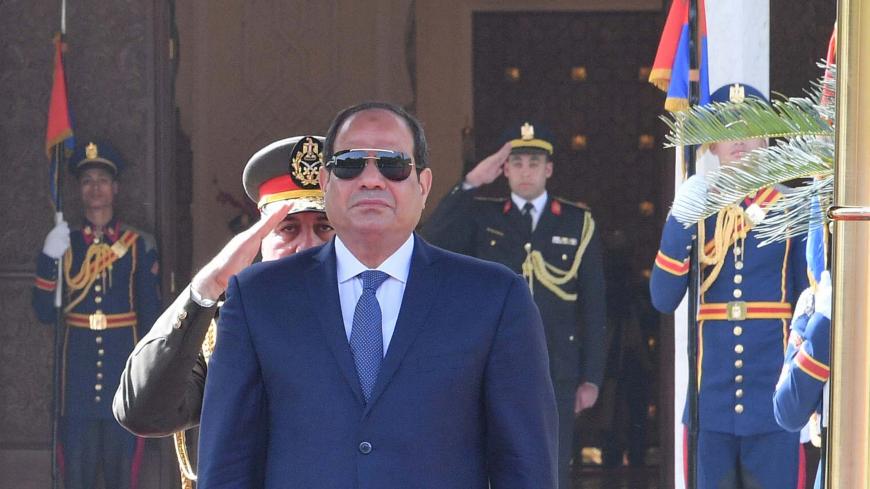 CAIRO — Egyptian President Abdel Fattah al-Sisi apparently plans to wait at least until October to appoint a vice president — a position being revived for the first time since Mohamed ElBaradei became acting vice president for a month in 2013.

Media reports shed light July 27-29 on the laws parliament will need to pass during its fifth and the last cycle (October 2019 to July 2020) as complementary legislation to constitutional amendments approved during the just-ended cycle. The amendments extend the president's term to six years from four and expand his powers, and introduce a Senate, among other changes.

During the fourth parliamentary cycle, parliament members started discussing the laws on electing a House of Representatives and Senate, yet there have been no new developments regarding amendments relating to the appointment of a vice president since they entered into force after a referendum passed in April.

More than 27 million Egyptians voted to approve the amendments, which parliament had approved earlier that month, by more than a two-thirds majority.

The government said almost 23.5 million voters approved of the amendments, which allow the president to appoint one or more vice presidents and determine the powers of each. The vice president would serve as acting president if a temporary impediment such as travel or illness prevents the 64-year-old Sisi from fulfilling his duties.

However, Seif Eddine al-Marsafawi, a political sociology researcher close to the opposition at the American University of Cairo, told pro-Muslim Brotherhood Arabi21news in April the measure is designed for a political emergency, such as the 2011 revolution, or in case the president’s life is at risk. The goal is to ensure a smooth transition of power to a reliable person for that decision-making cycle, he said, adding that he didn't expect Sisi to appoint a vice president in the short term.

Marsafawi said that the person Sisi does choose will probably have a military background, as 15 out of the 18 people appointed to as vice president during Egypt’s history were service members. The post had been abolished under the 2012 Constitution.

Other experts and decision-makers say there are purely practical reasons behind the reintroduction of the post. A parliament member told Al-Monitor on condition of anonymity, “The 2018 elections indicate that Sisi stands upon the pinnacle of popularity, as he obtained more than 21 million votes. There is no prelude to any political crisis against him. ... The introduction of such a post has been logical and necessary when drafting the constitutional amendments, given the increased burdens on the president’s shoulders and the need for someone to assist him in some dossiers.”

Commenting on the reasons why a vice president has yet to be appointed, the source said the timing is up to the president, not parliament, and filling the post isn't mandatory.

Some opponents of the constitutional amendments are skeptical about parliament's intentions.

Abdul Qader Atta, a political science professor at the University of Assiut, told Al-Monitor that in the event of a political crisis, power can't be transitioned smoothly. He said citizens aren't naive and won't agree to a vice president who was involved in a crisis. This was demonstrated in February 2011 when many citizens rejected the idea of President Hosni Mubarak delegating power to his vice president, Gen. Omar Suleiman, following the January 25 Revolution demonstrations — despite Suleiman’s popularity.

Atta went on to say that it was necessary to reintroduce the post of vice president given the major leaps Egypt is making in economic and other development, upgrading infrastructure and combating terrorism and corruption. This will allow the president to assign some of these projects to the vice president, or send him to meetings and events.

He said the delay in picking a vice president might mean Sisi is still examining which projects the vice president needs to address first. Atta also cited the lengthy vetting process.

Unlike Marsafawi, Atta anticipates that the future vice president will probably be one of the former officials who demonstrated their competence in their previous positions, regardless of whether the person has a civil or military background, is Muslim or Christian or is a man or a woman.

Some officials already are making foreign visits on Sisi’s behalf. Most recently, Mohamed Orfan, the presidential assistant for government affairs and former head of the Administrative Control Authority, arrived July 27 in Tunisia to convey condolences for the July 25 death of President Beji Caid Essebsi.