US President Donald Trump’s fawning over his Turkish counterpart at the Osaka summit carried little real meaning, and a Turkey-US collision is still very possible. 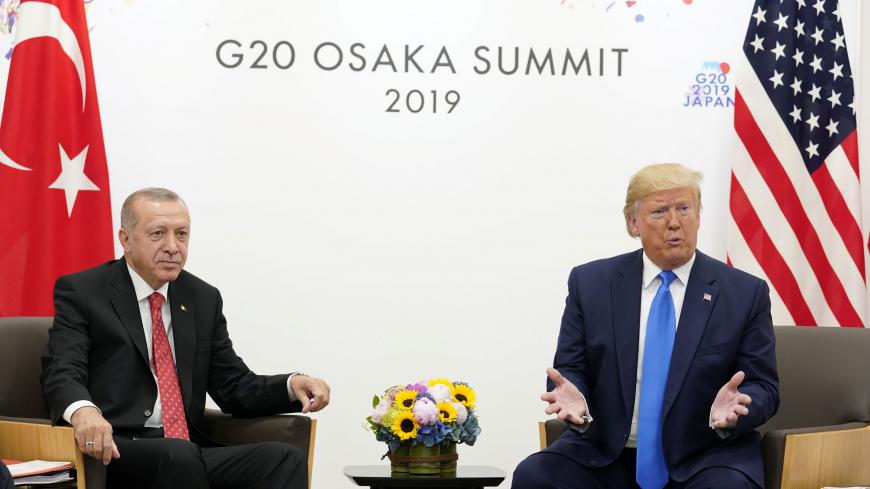 “And look at these people, how nice they are. Look at them. They’re so easy to deal with. Look at them. Central casting. There’s no Hollywood set where you could produce people that look like them,” US President Donald Trump gushed over the members of the Turkish delegation to the G-20 summit in Osaka.

The words followed his introductory statement, watched by millions of Turks on television or social media: “It’s my honor to be with a friend of mine, somebody I’ve become very close to, in many respects, and he’s doing a very good job: the president of Turkey.”

Trump went on, “And we have a meeting largely to do with trade. We’re doing more and more business, and we expect to be able to quadruple that business with Turkey. We think it will be great. They’re great craftsmen. They have great product. And we’re opening it up. We also do military trading, and they buy a lot of our military equipment.”

Trump resembled a street peddler more than a statesman, but he was successful. The Turkish delegation beamed, flattered. In addition to Erdogan, they included high-level Turkish officials from the foreign and defense ministers to president’s son-in-law and the Turkish spy master.

Trump’s remarks should have considered insulting, if not humiliating. Either they didn’t understand the severity of the situation or chose not to acknowledge it because their boss, Erdogan, was very happy with the encounter.

The Turkish side was looking for a way to avoid sanctions over Turkey’s purchase of a Russian-made missile defense system. The crisis in relations seemed imminent with a devastating impact on the already ailing Turkish economy. Erdogan did not hear anything from Trump about sanctions.

Although the Turkish public and observers seemed to miss the humiliation of Erdogan and his entourage, they did notice that nobody in the Turkish delegation had any paper or pens in their hands, while most Americans seated across from them did. In an autocratic, one-man regime this made sense: If Erdogan, a micromanager, did not instruct any of them to do so, how could they dare bring pens and notebooks? Erdogan and Trump share many things in common.

In a separate press conference in Osaka, Trump referred to Erdogan approvingly as a “tough cookie,” adding, “But I get along with him.”

“Frankly, he wanted to wipe out — he has a big problem with the Kurds, as everyone knows. And he had a 65,000-man army at the border, and he was going to wipe out the Kurds, who helped us with [the Islamic State]. We took out the caliphate. We have 100% of the caliphate,” Trump said.

“And I called him and I asked him not to do it. They are, I guess, natural enemies of his or Turkey’s. And he hasn’t done it.”

Amazingly, the Turkish side, known for its oversensitivity to being perceived as acting under the instructions of foreign powers, did not react at all to Trump’s statement. The reason is simple: The Turks were delighted by Trump’s remarks blaming the Barack Obama administration for Turkey’s deal with Russia to purchase the S-400 missile defense system. During his meeting with Erdogan, Trump said Erdogan’s government had been treated "unfairly" by his predecessor.

Erdogan, reeling from a resounding defeat in Istanbul and in fear of a looming financial crisis, left Osaka satisfied. Trump never breathed a word about sanctions nor implied they were a possibility. The most Trump said was, “It’s a complicated deal. We’re working on it. We’ll see what we can do.”

That was enough for Erdogan. He could disregard all the humiliation; his priority was to get Trump on board regarding the implementation of the Countering America’s Adversaries Through Sanctions Act following the delivery of Russian missiles.

However, he may have little cause for optimism. Senior Republican Senator Lindsey Graham, who is known as a Trump supporter and has developed cordial relations with Erdogan, said on the June 30 episode of the TV program "Face The Nation," “Well, I'm in Turkey and it's being reported in the Turkish media that President Erdogan is claiming that President Trump, in their discussions, told Turkey that if you activate the S-400, we'll find a way around sanctions. I doubt if that conversation occurred. It's impossible — under our law, if Turkey buys the — activates the S-400 missile battery they bought from the Russians, sanctions would be required under law.”

“For all the display of bonhomie in Osaka, the deal is a slow-motion collision between Turkey and the US that could turn into a train-wreck,” the Financial Times predicted in an editorial, adding that Erdogan “would be unwise to put too much faith in Mr. Trump’s chummy weekend words.”