Pleasantries aside, can Trump deliver what Erdogan wants?

Turkey expects President Donald Trump to help it avoid US sanctions over the S-400 affair, but many in Turkey question whether Trump has that power. 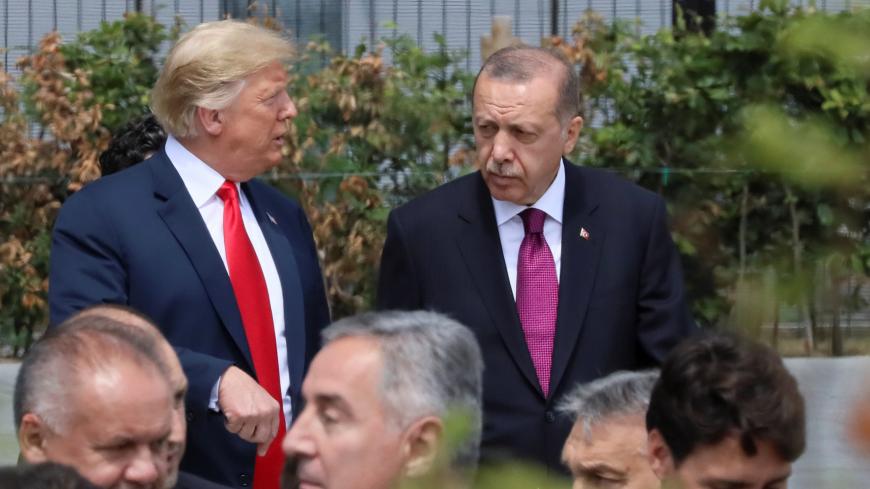 The results of the meeting between President Recep Tayyip Erdogan and Donald Trump at the G-20 summit in Osaka have left the Turkish side in a triumphant mood, having produced much more than Ankara expected.

Turkey’s purchase of Russian S-400 air defense systems, which has resulted in a crisis between the two allies, had been billed from the start as a priority agenda item for the talks.

During the talks, Trump not only went out of his way to support the Turkish argument, but also showered Erdogan with praise, calling him "a friend" whom he is "very close to in many respects."

Overjoyed members of Erdogan’s team and his supporters in the press see the results of the Osaka talks as a major blow to what they consider to be the “anti-Erdogan American deep state.”

They believe that Trump and Erdogan would have solved the problems between the two countries if it weren’t for certain administration officials and members of Congress. This overly simplistic view, however, reveals a lack of understanding of the US government.

Congress, with strong support from within the Trump administration, maintains that Turkey’s purchase of the S-400 is not compatible with its NATO membership. It has announced its intention to slap sanctions on Ankara under the Countering America's Adversaries Through Sanctions Act (CAATSA) if the Russian deal goes through.

Congress is also threatening to withhold the delivery of new-generation F-35 stealth fighter jets to Turkey on the grounds that that the deployment of the S-400 systems in Turkey will expose these jets to Russian monitoring and scrutiny.

Ankara is partner in the production of the F-35, and plans to buy 100 of these advanced jets. It has already spent a considerable amount of money on the project.

Erdogan is aware that having CAATSA sanctions slapped on Turkey and being expelled from the F-35 program would not only have detrimental effects on the already vulnerable Turkish economy, but also leave Ankara with no choice but to start afresh to seek new suppliers for stealth fighter jets.

Meanwhile, Erdogan has given no indication that he is prepared to renege on his deal with Russia, and remains defiant on this score. He repeated this position again in Osaka, where he also met Russian President Vladimir Putin, adding that the S-400 will commence delivery within 10 days.

Expressing understanding for the Turkish position during his meeting with Erdogan and his team, Trump elaborated on his views on the matter during a press conference in Osaka.

Declaring Erdogan to be “faultless” regarding the S-400 issue, Trump accused former US President Barack Obama’s administration of causing the crisis with Turkey over this matter.

“[Erdogan] wanted to buy the Patriot missile. President Obama’s group said no. He kept wanting to buy it. They kept saying, no, no, no. Couldn't buy it. Now, he needed it for defense. So he then went to Russia and bought the S-400,” Trump said.

He added that Turkey had also bought over 100 F-35s produced by Lockheed Martin in the meantime.

“Now [Erdogan] wants delivery. … He has paid a tremendous amount up front to Lockheed, our company, our jobs, everything, and now they are saying he is using the S-400 system, which is incompatible with our system,” Trump said.

“I’m all for our country, but [Erdogan] got treated very unfairly,” he added. Referring to the situation with Turkey as a “mess” for which Erdogan could not be faulted, Trump said, “It’s a complicated deal. We are working on it.”

A White House statement later suggested that Trump was less lenient with Erdogan on the S-400 issue than his remarks to the press intimated.

“The president expressed concern about Turkey’s potential purchase of the Russian S-400 missile defense system, and encouraged Turkey to work with the United States on defense cooperation in a way that strengthens the NATO alliance,” the White House said.

This statement, nevertheless, failed to act as a damper for the Turkish side. The fact that Trump had explained the official Turkish position on its S-400 purchase to the world, and expressed understanding for this position, was considered a “diplomatic victory” on its own.

According to Mehmet Acet, a political commentator for the pro-government daily Yeni Safak, this was a surprise.

“Everyone expected Trump to utter sympathetic remarks about Ankara, but the fact that he would do much more than that, and support Turkey’s arguments, had crossed no one's mind,” Acet, who was in Osaka, wrote.

Acet argued that Turkey’s hand was much stronger now than it had been before the Erdogan-Trump talks.

Kurtulus Tayiz, a commentator for the pro-government daily Aksam, wrote that it is not important now if Trump continues to face obstructions from the Pentagon regarding Turkey’s S-400 purchase. “Erdogan was right from the start on the topic of the S-400s. Turkey’s arguments have now been accepted by the US president in front of the whole world,” Tayiz wrote.

“At this point, any pressure or any threat of sanctions from the Pentagon, or from our European allies, regarding the S-400 will no longer have any legitimacy,” Tayiz claimed.

Yet this “victory” for Ankara could easily turn out to be a pyrrhic one.

Despite Trump’s pleasing remarks, he did not commit himself regarding the sanctions, other than saying that the United States was still seeking a solution to the problem with Turkey.

US Sen. Lindsey Graham, R-S.C., was among those expressing doubts about claims that Trump had given assurances to Erdogan regarding sanctions.

“I'm in Turkey and it is being reported in the Turkish media that President Erdogan is claiming that President Trump, in their discussions, told Turkey that if you activate the S-400, we'll find a way around sanctions. I doubt if that conversation occurred,” Graham told CBS during a stopover in Istanbul.

“It's impossible. Under our law, if Turkey buys and activates the S-400 missile battery they bought from the Russians, sanctions would be required under law,” Graham added.

Diplomatic sources in Ankara indicated that Trump only has the right to determine the nature of sanctions, meaning that he could opt for more lenient ones, but said he could not stop the sanctions altogether.

Others noted that Graham — who also underlined that he does not want a crisis with NATO member Turkey — corrected himself during his CBS interview and made a distinction between Turkey’s “buying” the S-400 and “activating it.”

They believe this points to a possible solution with Washington, whereby Ankara receives the S-400 but does not activate them in order to avoid US sanctions.

Others, however, say it makes no sense for Turkey to purchase an expensive air defense system and keep it in storage. They add that this would also reflect badly on Erdogan politically at home.

Pointing out that the key to the problem lies with the US Congress, Yetkin also emphasized that moves to have sanctions imposed on Turkey had bipartisan congressional support.

Referring to a shared dislike of Erdogan in Congress, Yetkin argued on his blog that it was time for Ankara to start working on members of Congress to gain their support.

“Trump succeeded in reducing tensions in order not to lose Turkey in NATO and push it toward the Russian camp," Yetkin wrote. "An external factor that would have had an affect on the economic crisis [in Turkey] has also been averted for now. But the problem has not disappeared.”

There is little doubt that Trump did Erdogan a big favor in Osaka, for which Erdogan is clearly grateful.

The problem, however, is that if Trump fails to deliver on what Ankara expects, this will hit Erdogan politically at home. He will appear to have been let down badly by his “friend” over a critical national issue.

Not surprisingly there are voices in Erdogan’s own camp warning that Trump can’t be trusted or relied on.