Erdogan confident he can sway Trump to skip sanctions

The two presidents will meet at the G-20 summit to discuss a standoff over Turkey’s purchase of a Russian antiaircraft system that obliges the US government to introduce punishing economic sanctions on its NATO partner. 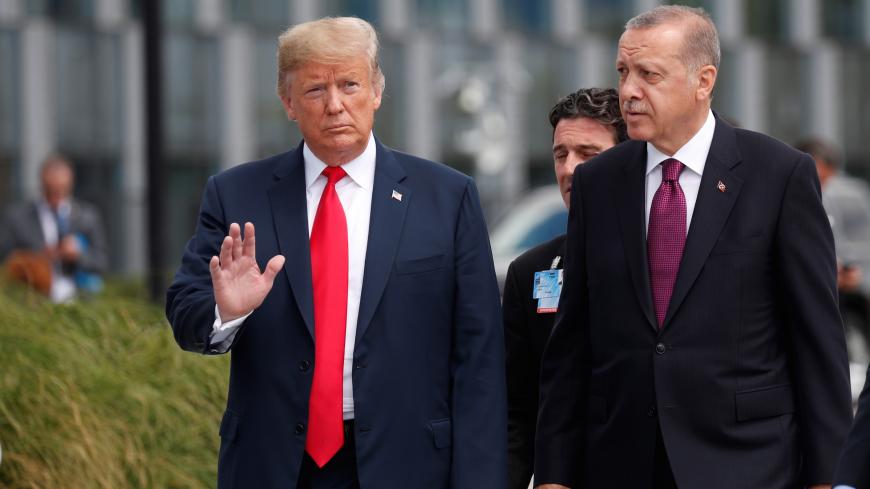 ISTANBUL — President Recep Tayyip Erdogan expressed confidence on Thursday he will be able to forestall a showdown with the United States over Turkey’s purchase of advanced Russian weapons when he and President Donald Trump meet this week at the G-20 summit in Japan.

Turkey faces economic sanctions and other punitive measures by its NATO partner should it take delivery next month of the $2.5 billion S-400 Triumph missile system it says it needs for self-defense.

Erdogan also told the Japanese business daily Nikkei that Trump is still considering making his first visit to Turkey in July after they reach a breakthrough in the long-running dispute over the S-400s on Saturday during one of 10 tete-a-tetes the US president has scheduled in Osaka.

“I believe my meeting with US President Trump during the G-20 summit will be important for eliminating the deadlock in our bilateral relations and strengthening our cooperation,” Erdogan said in the interview published on Thursday. “I believe we will resolve the S-400 issue in line with our alliance and strategic partnership.”

It was not clear how Erdogan plans to persuade Trump this time around on an issue that has bedeviled relations and pushed a 70-year strategic partnership to the brink.

Erdogan may revive his idea of setting up a technical group to study US claims the Russian batteries will jeopardize the Pentagon’s F-35 Joint Strike Fighter program if they are both deployed in Turkey, newspapers said. But the United States has already rebuffed that offer, insisting the only way for Turkey to remain in the warplane program is to forgo the Russian antiaircraft system.

In separate remarks, Erdogan repeated that there was no going back on the S-400s, with the delivery process already underway. He also suggested Trump is unlikely to follow through on his administration’s threat of sanctions.

“Until now, I have never gotten this impression in any of my meetings with Mr. Trump. But some people at the lower levels have expressed and talked about these kinds of things,” he said at a news conference on Wednesday. “I wasn’t aware that NATO countries had begun sanctioning one another."

Yet Trump used his favorite foreign policy sticks on Turkey less than a year ago, slapping sanctions on two government ministers and doubling tariffs on imports of Turkish steel after Erdogan refused to free an American pastor held on espionage charges. The punitive measures were considered relatively mild and have been lifted since the pastor was let go, but not before sparking Turkey’s most severe currency crisis since 2001, slashing about a fifth of the value off the lira and unleashing a recession from which Turkey is still struggling to emerge.

The two populist leaders appear to enjoy a good personal relationship but Ankara has lost other friends in Washington. Al-Monitor reported this week Ankara is lobbying on Capitol Hill to hold back on penalties under the Countering America’s Adversaries Through Sanctions Act (CAATSA), which requires the US government to sanction entities that purchase Russian arms and limits Trump’s ability to ease sanctions without congressional review.

“Many Turkish officials naively believe that Trump will agree with Erdogan to adopt a softer path in dealing with this issue, at the expense of discrediting the entire US intelligence community, the Pentagon and the State Department,” wrote Serkan Demirtas, a columnist at the Hurriyet Daily News.

Besides sanctions, Turkey’s membership in the F-35 program is also at stake. The Pentagon has already grounded Turkish trainee pilots and the US Senate Foreign Relations Committee has drafted a bill that would block the transfer of F-35s to Turkey once it receives the S-400s.

Erdogan told Nikkei Turkey could take the United States to international arbitration to recover the $1.25 billion it has already invested in the $400 billion F-35 project. He added that Trump has never threatened to boot Turkey from the project in their many talks.

Meanwhile, Turkey may not actually be all that fussed if it cannot buy the F-35s, already delayed for a decade due to design and technical problems, according to Yeni Safak, a newspaper close the government. Turkey’s air force is worried about how fighting fit the jets are and doesn’t want to rely on the United States for parts and logistical support in the long term, the paper reported, citing unnamed military and state defense industry officials as saying, “If this tension [over the S-400s] paves the way to avoid buying the F-35, that’s a good result.”

The United States and Turkey are also wrangling over divergent strategies in Syria, Iran sanctions and the detention of Americans and US diplomatic staff in Turkey. An Istanbul court this week freed a Turkish consulate employee accused of involvement in a coup attempt against Erdogan from house arrest for health reasons, widely seen as a friendly gesture ahead of Erdogan’s meeting with Trump.

But sanctions remain a real danger for Turkey, with the potential of worsening a painful economic downturn that has already dented popular support for Erdogan’s government. Voters punished his party’s candidate in Sunday’s do-over election for Istanbul mayor, despite Erdogan’s ferocious campaigning on his behalf.

While the election of a city administrator might normally have little impact on a country’s foreign policy, domestic politics in Turkey are profoundly shaped by Turkey’s standing in the world, with Erdogan often evoking shadowy foreign threats to stoke nationalist fervor.

"Turkey's relationship with the United States and European Union and with its own neighborhood and Erdogan's insistence on purchasing the S-400s signal where he wants to take Turkey," said Merve Tahiroglu, a research analyst at the Foundation for Defense of Democracies in Washington. “Its economy is in dire straits and dependent on foreign capital. If Erdogan makes this choice, he will be making a foreign as well as domestic policy choice.”