Within hours of the announcement of a truce, Syrian forces are accused of firing on both rebel targets and a Turkish army outpost, but even a tentative respite is welcome as renewed clashes have displaced hundreds of thousands of people since April. 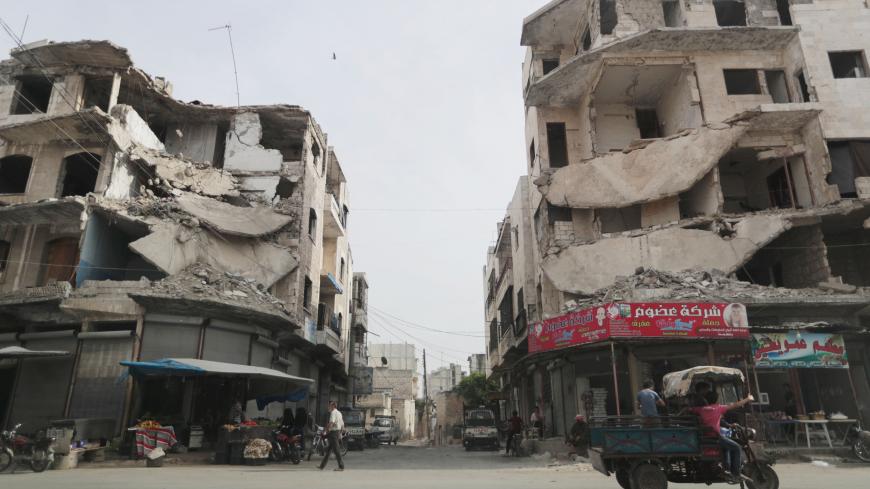 A man walks past damaged buildings in the city of Idlib, Syria, May 24, 2019. - REUTERS/Khalil Ashawi

ISTANBUL — A cease-fire between Syrian government forces and the opposition brokered by Russia and Turkey appeared at risk within hours of being declared as Ankara accused President Bashar al-Assad’s forces of attacking a Turkish military outpost.

The Russian military said late on Wednesday that Moscow and Ankara had struck a deal for a complete cease-fire in the northwestern province of Idlib, the last stronghold of Syria’s rebellion. Home to three million civilians, Idlib has been under Russian and Syrian bombardment since late April in the worst fighting in a year that has seen some 500 people killed.

Just two hours after the announcement, Syrian forces shelled towns and carried out airstrikes near Idlib and Hama, the Syrian Observatory for Human Rights reported.

Syrian troops also fired 35 mortar shells at a Turkish military observation point that is monitoring a de-escalation zone in Idlib, the Turkish Defense Ministry said in a statement. “The necessary initiatives have been undertaken with Russia in connection with the attack,” it said.

On Thursday, Turkish Foreign Minister Mevlut Cavusoglu accused the Syrians of carrying out a “deliberate” attack on the Turkish post, wounding three soldiers, and told reporters that the cease-fire is not fully secured.

However, Russia’s Defense Ministry said later in the day it was the Syrian opposition that had hit the observation post and that the Turkish army had asked Moscow to strike rebel positions, providing them with coordinates to do so.

Even a shaky truce is still likely to be welcomed by Turkey, worried the renewed violence will force Syrians to flee across the border and stoke resentment among Turks who are increasingly unhappy about hosting more than 3.5 million Syrian refugees.

News of the cease-fire came on the heels of a speech by Turkish President Recep Tayyip Erdogan in which he said Turkey has “already purchased” a Russian anti-aircraft system, rebuffing a US demand that its NATO partner drop out of the $2.5 billion contract by next month.

Erdogan denied the weapons deal is linked to policies in Syria, even if the timing of the Russian cease-fire announcement signals that Moscow may view things differently. In Syria, the bombardment of rebel-controlled territory has at times waxed and waned as Turkey and the United States have tried to resolve differences that have pushed their partnership to the brink.

Turkey and Russia support opposite sides in the Syrian war, with Turkey one of the last Western nations to openly back the rebels, but they have worked closely in recent years to reduce the fighting and find a political resolution of the eight-year conflict that has killed more than a half-million people and unleashed one of the worst humanitarian crises since World War II.

Turkey and Russia’s embrace has unnerved the United States, whose own relationship with Ankara has been marred by a series of disputes, including the detention of Americans in Turkey, US support for Syrian Kurdish fighters and, most critically, the acquisition of the S-400s, an advanced Russian air defense system that the Pentagon believes will jeopardize NATO security, including its new F-35 fighter jets, which Turkey is helping to build.

Defense Minister Hulusi Akar spoke by phone with acting US Defense Secretary Patrick Shanahan on Thursday to express his displeasure with a letter Shanahan sent him last week warning Turkey will be expelled from the F-35 program by the end of July if the S-400 contract is fulfilled.

The S-400s are a “done deal,” Erdogan reiterated on Wednesday, adding the batteries would reach Turkey next month. Turkey will not stand idly by if it is ejected from the F-35 project for which it has already paid $1.25 billion, he also told members of his ruling party.

“Turkey is not just an F-35 customer. At the same time, it is a manufacturing partner,” Erdogan said. “We will seek redress for our exclusion, which isn’t based on intelligent or justified reasons, on all platforms,” including when he meets President Donald Trump at the G-20 summit in Japan at the end of June.

Turkey hopes that Trump and Erdogan’s personal rapport can help it skirt sanctions Congress plans to implement over the S-400s, even though the American leader lacks the authority to veto the measures designed to dissuade countries from doing business with Russian defense and intelligence entities.

Sanctions could further cripple Turkey’s economy, which sank into recession late last year after a currency crisis sparked by the diplomatic row with the United States.

“Turkey is being squeezed between Russia and the US, and it’s … very difficult for Erdogan to emerge as the winner,” said Wolfango Piccoli of the London-based consultancy Teneo.

“I don’t think the Americans are willing to give Turkey any space on this. The American point of view is either you take [the S-400s] or you don’t. … Everything we have seen so far is that the delivery is on schedule and it is coming,” Piccoli told Al-Monitor.

“From the Russian perspective, there is no strong incentive to help Turkey,” he said. “They are creating a major rift between two allies without shooting a single bullet — and they are also cashing in on the side.”