A breakthrough in the diplomatic dispute sparked by Turkey’s purchase of an advanced Russian missile system and Washington’s support for Syrian Kurdish militia continues to elude the NATO allies. 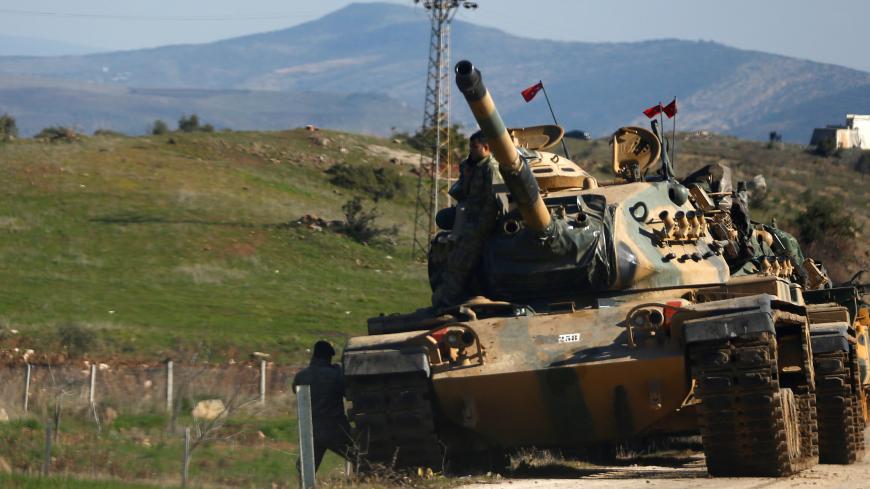 Turkish soldiers stand next to a tank near the Turkish-Syrian border in Kilis province, Turkey Jan. 31, 2018. - REUTERS/Osman Orsal

Tensions between NATO allies Turkey and the United States continue to simmer this week as Ankara uses the threat of an incursion into Syria and Washington weighs economic sanctions to pressure each other to step back from the brink of a diplomatic crisis.

Turkey’s National Security Council (MGK) will meet on Tuesday to discuss a slate of issues dividing the NATO allies, reported CNN Turk. On the agenda is Ankara’s purchase of a Russian antiaircraft system that Washington says will undermine NATO security and the US decision to kick Turkey out of its F-35 fighter jet program in response to the $2.5 billion acquisition from Russia.

The MGK, which brings together President Recep Tayyip Erdogan and his senior military commanders, will also weigh a potential military operation in northeast Syria, where US special forces remain alongside their Syrian Kurdish allies who Turkey considers a terrorist network, the broadcaster reported. Turkey has been threatening an operation since last year.

Erdogan has shown little appetite for compromise, despite the risk that onerous US sanctions required by Congress for entities that buy Russian military hardware could undermine a weak recovery in Turkey’s $750 billion economy. He appears to be betting that the United States will blink before imposing harsh penalties for fear it could wreck the 70-year-old alliance.

Last week, Washington dispatched its special envoy for Syria, James Jeffrey, for the latest round in long-running negotiations on jointly establishing a buffer zone that would remove the Kurdish-led Syrian Democratic Forces (SDF) from the Turkish border region.

But late last week, Erdogan signaled those talks will do little to deter Turkey from attacking the SDF, who have fought the Islamic State alongside US soldiers since 2014 but who Turkey considers a national security threat for their links to militants who have waged an insurgency since 1984 within Turkey.

“Regardless of the result of the meetings with the US over establishing a safe zone along the Syrian border, we are determined to shatter the terrorist corridor east of the Euphrates River,” Erdogan told a meeting of his ruling Justice and Development Party on Friday.

The risk of encouraging a confrontation with Turkey in Syria may help delay US sanctions, analysts have said. White House officials were previously reported to be preparing for a decision on sanctions last week as Trump lobbied Republican lawmakers to forgo punishing Turkey. After Erdogan spoke, Trump again said on Friday that he he does not blame Turkey for buying Russia’s advanced S-400s.

Erdogan also said Turkey will purchase fighter jets from another country if the United States refuses to sell it the F-35, calling on the US Congress to drop its “obstruction” of weapons sales. “You’re not giving us the F-35s? Fine, but excuse me, we will take measures and turn elsewhere,” he said. Russia has already said it will sell Turkey its Su-35 fighter jets if it wants them.

Russia and Turkey have cooperated on Syria, despite supporting opposite sides in the eight-year war. A shaky cease-fire Erdogan negotiated with Russian President Vladimir Putin to protect Idlib province, the last rebel holdout in northwest Syria where more than three million civilians are sheltering, has been severely tested since April, with more than 400 civilians killed and at least 440,000 displaced, the UN Office for the Coordination of Humanitarian Affairs said on July 25.

Syria and Russia have stepped up shelling and airstrikes in the area, where Tahrir a-Sham, listed by the UN as a terrorist group, is the main rebel force. But other opposition fighters that Turkey backs are also present and the Turkish military maintains observation posts to monitor the de-confliction zone.

Turkey itself controls more than 2% of Syrian land along its border after Russia effectively allowed it to enter and capture territory from both Islamic State and Kurdish forces.

Turkey is helping Russia “pinpoint” militants in northwest Syria and Ankara is being informed in advance of Russian airstrikes, the Russian General Staff said on Monday, according to Sputnik.

There was no immediate response to the claim from Turkish officials. Last month, Turkey denied a Russian Defense Ministry claim that the Turkish military had provided rebel coordinates for Russian jets to strike their positions.