Escalation in Idlib may force Turkey to review its position

Confrontations between Turkish forces and the Syrian army are becoming more frequent in and around Idlib, the last stronghold of the Syrian opposition. 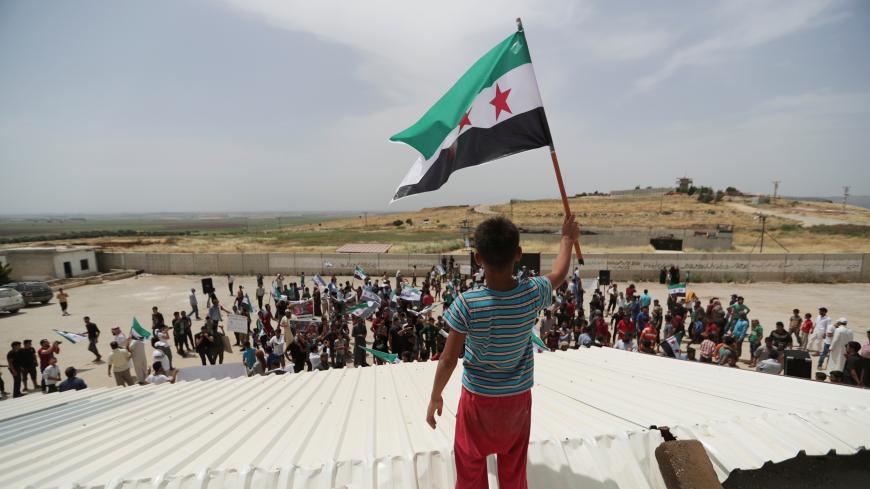 A boy holds the Free Syrian Army flag during a protest calling for an end to the strikes and for Ankara to open the frontier at the Atmeh crossing on the Syrian-Turkish border, in Idlib governorate, Syria, May 31, 2019. -

Syria's Idlib is becoming a bog of deadly violence where Turkish and regime armies are being drawn into direct confrontations.

Rising military fatalities in Idlib, the last rebel stronghold in Syria’s civil war, could force the Turkish government to review its strategy there. Though Turkish President Recep Tayyip Erdogan won't want to take a step back in foreign policy so soon after his ruling party received a major blow in domestic politics, that may be a bitter pill he has to swallow.

Moscow and Ankara have worked together on peace talks regarding the Syrian civil war, but Russia backs Syrian President Bashar al-Assad and Turkey has supported the Free Syrian Army. Those peace talks stipulated that Turkey would establish a dozen observation posts in Idlib province, which borders Hama province. But those posts have become targets several times in recent weeks, leaving one Turkish soldier dead and three wounded. Turkey has retaliated, striking regime positions.

The Syrian regime claims the opposition uses the Turkish observation posts as shields from which they fire on Syrian army positions. But the regime says it isn't looking to continue the battles with Turkey.

“We hope our military and the Turkish military don't fight. We are fighting terrorists, especially in Idlib," Syrian Foreign Minister Walid Moallem said June 18. "The real question is, what does Turkey want to achieve in Syria?”

The Syrian regime wants Turkish troops to pull back. But the situation in the field is liable to get out of control. Russia’s role as a “guaranteeing power” to prevent clashes between Syria and Turkey is becoming more important. Although Russia continues its backing of Turkey — at least in part because of the sensitive S-400 arms deal between the two countries — it still doesn’t fully use its influence to rein in the Syrian regime.

So why are Syria and Turkey fighting, and why is the situation escalating? After clashes on April 29, the Syrian army imposed control over 20 locations including the Madik fortress in rural Hama, but Turkish-backed groups retook three areas: Tell Meleh, Jubbeyn and Zahra. In response, the Syrian army launched five offensives in June, trying to restore its control over those three locations. It failed.

According to opposition groups, the Syrian army has sustained about 700 fatalities during the past two months. The number is impossible to verify, however, as the Syrian government doesn't announce its losses.

The opposition groups supported by Turkey recently shifted their strategy from defense to offense to spread the battles to government-dominated areas. That appears to be the regime's main motive for increasing harassment fire against the Turkish positions. Now Syria is blaming Turkey for setbacks it suffers on the ground.

But there are several reasons for the setbacks. First is the inadequacy of the Syria Arab Army. Though Tehran wants Assad to remain in power, Iran has refused to assist regime forces during these operations in order to maintain its relatively good relations with Turkey when both parties are at odds with the United States. Opposition sources claim Russia was disappointed by the Syrian army's loss of locations it had captured. These sources say Russia blamed Syria's elite Tiger Forces, commanded by Suhail Hassan, and demanded that the Fourth Company, led by Maher Assad (the president's brother), join the fighting. Sources refer to visit of Maher Assad, accompanied by Syrian Air Force Intelligence Directorate chief Jamil Hassan, to Syrian Arab Army units in Gab plains. Nevertheless, it is essential to note these are speculations.

Finally, Turkey has conducted critical interventions in favor of the opposition. Armed groups deployed when Turkey first entered Syria in 2016 were moved south of Idlib and north of Hama, where clashes had escalated. These groups cooperated with Hayat Tahrir al-Sham and other jihadist organizations. Turkey supplied weapons and armored vehicles to groups fighting under the opposition's Syrian National Army and National Liberation Front groups.

It's clear that unless Turkey stops supporting opposition groups, its conflict with the regime will continue. But Turkey can't call it quits given its current policy of keeping the Kurds in the north from entrenching themselves and of trying to ensure opposition groups have a place in Syria’s future.

One element helping Turkey, however, is US concern over Turkey's military presence in Syria — though the US attention may annoy Russian President Vladimir Putin. At a recent meeting in Osaka, Japan, US President Donald Trump unexpectedly brought up the issue of Idlib in response to a question about Turkey’s controversial purchase of the Russian-made S-400 missile defense system.

“Erdogan has a big army. They are fighters. Big fighters. We worked together at Idlib because he too doesn’t want to see millions of people killed," Trump said, adding, "I told Putin to go easy in Idlib."

Also, Trump’s special envoy to Syria, James Jeffrey, said a possible victory by the Syrian army at Idlib could be very dangerous for the areas where US and Turkish soldiers are deployed.

In other words, if Idlib falls to the regime, areas controlled by Turkish and American forces will be next. Therefore, Russian and Syrian forces must be stopped at Idlib.

Turkey avoids making Idlib casualties a major issue to avoid public backlash. The Turkish public, which is very concerned about martyrs, can force the government to review its position in Idlib as the situation changes. Also, don’t forget that after the June 23 election rout in Istanbul, Erdogan will not want to show weakness by backtracking in Idlib.