For the first time since Tunisia's independence, a political party founded by retired military officers will contest legislative elections. 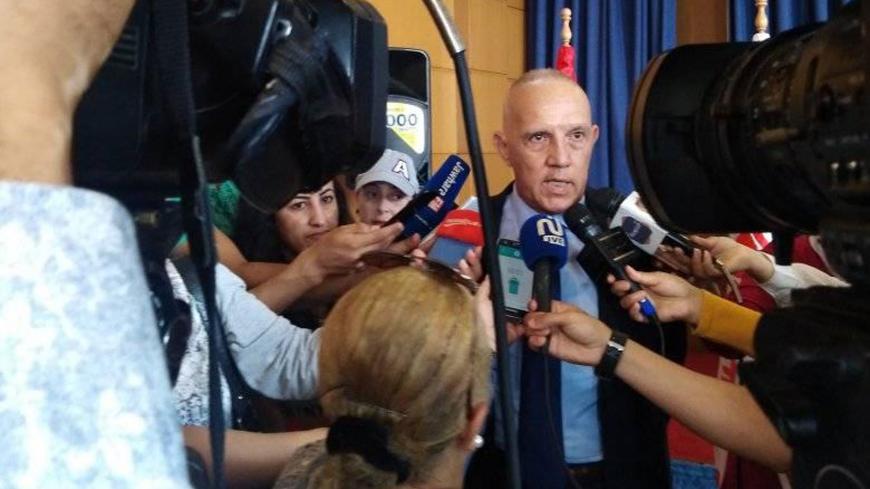 A representative for Halumou li Tunis speaks to the press, in an image uploaded July 11, 2019. - Facebook/agissonsTN

TUNIS — Tunisia’s military had for decades adhered to remaining outside the political arena, but in a first for the country, retired commanders and officers of the Tunisian Armed Forces in early July announced the official establishment of a political party, Halumou li Tunis (Acting Together for Tunisia or Agissons pour La Tunisie). On July 29, Halumou li Tunis issued a statement on Facebook announcing that it had submitted lists to run in 17 electoral districts across 17 governorates in the legislative elections scheduled for Oct. 6.

Speaking to Al-Monitor before the July 29 posting, Mustafa Saheb at-Tabea, party chairman and a former high-ranking military officer, had said, “We obtained a permit, and we are determined and serious in our preparations to run on the lists in the legislative election in Tunisia’s 24 governorates.”

Tabea underlined that the idea behind setting up a party, whose formation was announced July 10, was specifically intended to end the tradition of distancing the military from politics, as had been the case since independence, in 1956. At the same time, he emphasized that the party is open to everyone and asserted that having former military commanders enter the political and partisan arena does not mean that the military as an institution has deviated from its historical neutrality.

“We will be working on harnessing national values and sense of belonging, which we were raised on in the military,” Tabea said, also explaining that his party’s political bureau, composed of three retired officers, is currently working on an election strategy to ensure that the party attracts representation in all parts of the country.

He remarked that the party is approaching the legislative elections “with the belief that change in Tunisia should happen through laws and legislations … not by betting on the presidential elections,” the implication being the installation of a strong-man presidency. He added, “[The party] will not appoint a candidate to run for president,” Tabea claimed.

The electoral law ratified in January 2017 gave active duty military and security members the right to vote in municipal elections but continues to prohibit them from casting ballots in presidential and legislative elections. The leaders of the new party’s are banking on being able to build a popular base around families of military personnel, who are entitled to vote in the parliamentary and presidential elections.

In November, party founders had posted a founding statement on Facebook: “We are a group of high-ranking retired military officers together with an assemblage of civil dignitaries and prominent figures who are well known for having the country’s interest at heart and for the skills they have in the vital fields that the country is in need of.… We have decided to enter the arena of politics as a part of a centrist civil movement called Halumou li Tunis. This comes as part of a community-based project involving informed choices and practical and rational plans.”

The military’s media bureau declined an Al-Monitor request for a statement on the former commanders founding a party. In contrast, Kamal al-Akrout, national security adviser to the late President Beji Caid Essebsi, remarked to Al-Monitor that retired military members are citizens who enjoy all civil rights. They are entitled to engage in political and partisan activities and to vote provided that they do not speak in the name of the military as an institution or serve in a military capacity.

Akrout explained, “Following the revolution, the parties have always subjugated the military institution. The latter has maintained the same approach it has embraced since its inception, namely, neutrality and allegiance to the country solely.” He indicated that the military will continue to be neutral, at a distance from political jockeying and an equal distance from all parties.

Mohamed Bin Salem, a top official for the Islamist Ennahda, remarked to Al-Monitor that retired military officers are entitled to set up political parties as the law specifies once they retire, at which point their civil and constitutional rights are restored. Nevertheless, he expressed concern that former officers entering politics would be betting on the sense of belonging to the military and making sacrifices for the country to win voter support, instead of relying on political programs laid out during election campaigns.

The establishment of Halumou li Tunis brought the number of political parties in Tunisia to 219, and that number increased to 220 on July 2 when a party calling itself the Popular Front obtained a license.