The Carter Center in Tunisia has been accused of meddling in the country’s internal affairs after it issued a controversial statement calling for amendments to the Tunisian electoral law allowing members of the army and security forces the right to vote. 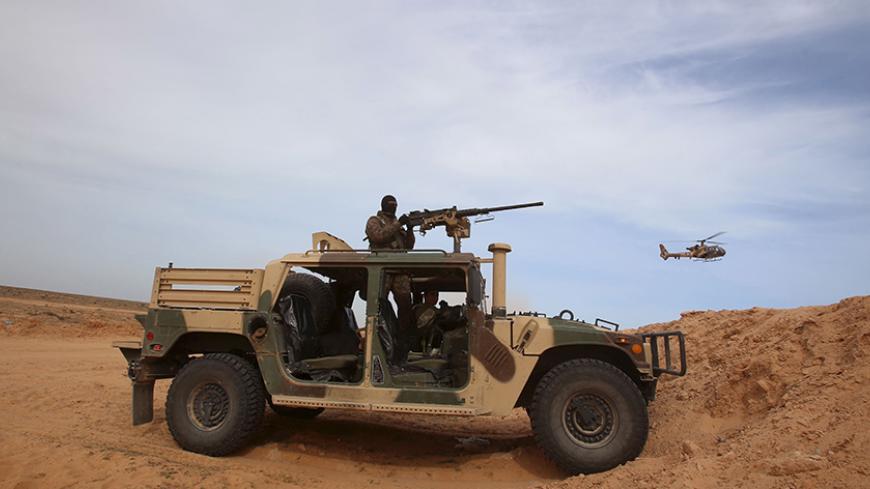 A Tunisian soldier holds his position during an exercise along the frontier with Libya in Sabkeht Alyun, Tunisia, Feb. 6, 2016.

The statement published by the Carter Center’s Tunis office calling for “improvements in electoral legislation” has triggered controversy and condemnation from local civic organizations in Tunisia. The center issued a statement Sept. 28 urging the Tunisian parliament to “make improvements to the electoral law giving the right to vote to the army and security forces.” Local organizations considered this call interference in Tunisian affairs.

The Carter Center opened its office in Tunis in June 2011 with the aim of monitoring the elections, the constitutional drafting process and the establishment of institutional and legal frameworks for elections. In 2014, the center was in charge of election observation of the presidential and legislative elections, and issued a report on them.

The controversy over the center’s latest statement triggered a debate about the role of nongovernmental organizations (NGOs), their relationship with the state and the limits of that relationship.

In its statement, the Carter Center called on Tunisian authorities to amend the electoral law, saying there is “a glaring lack of attention to the organization of regional elections, which would further encourage development and help meet citizens’ concerns in Tunisia.”

The organization 23_10, which supports the democratic transition process, said in a Sept. 30 statement that the center’s call aims to “impose legislative options that have no defined international standards and that may harm Tunisia’s interests, stability and sovereign decision-making.”

Sami Ben Salama, the organization’s general coordinator, told Al-Monitor, “The statement is contrary to the most basic rules on dealing with sovereign states because it intervenes in the work of the constitutional institutions.”

In the same context, in a statement published Oct. 4, the Tunisian Institute for International Relations condemned the statement issued by the Carter Center, considering it “interference in the sovereign decision of Tunisia.”

Regarding the points in the center’s statement that stirred up the controversy, Ben Salama said, “The first point is the center’s request to grant the right to vote to the army and security services. Our country — despite its flaws — has a long tradition of neutralizing those forces from politics, and our constitution requires them to be completely disciplined and impartial. The [center’s call] is a form of inciting the armed forces to disobedience and giving them the right to vote, which we consider more of a duty than a right, because the duty of the [army] is to protect the homeland as long as it is armed and to completely stay away from politics.”

He added, “Regarding the second point, the center is pressuring for the imposition of regional elections that no one is asking for. Although we support local democracy, we caution against conducting municipal elections without completing regionalization, as we believe we are in a transitional situation that is fragile and that any distraction to the authorities and to the resources could weaken the center and reduce the material resources available, which are already weak. This may cause strife between certain groups and may end up partitioning the country.”

In response, the director of the Carter Center’s Tunis office, Fida Nasrallah, told Al-Monitor via email, “The request to grant the right to vote to the military and internal security forces stems from our center’s position that voting is both a duty and a national right, not a political act. Depriving them of their right runs contrary to the international obligations of the Republic of Tunisia under the international covenant of the United Nations on civil and political rights. In addition, it is contrary to Article 21 and Article 34 of the Tunisian Constitution.”

Nasrallah added, “The fear that the army will not remain neutral and that the vote may be manipulated is an obsession shared by many countries. But these concerns can be reduced by adopting certain measures, not by categorically denying the rights of the armed forces. Regarding the regional elections, the statement did not recommend any special measures on the regional elections, but simply expressed concern about the total absence of a reference to the regional elections despite the fact that the Tunisian Constitution provides for the election under Section 7.”

Although the Carter Center’s statement was about the electoral law, the debate expanded to include the role of foreign NGOs in the country. The head of the Tunisian Institute for International Relations, Ahmed Mannai, told Al-Monitor, “Foreign NGOs have had a growing role in Tunisia after 2011, when the regime of Zine El Abidine Ben Ali fell. NGOs reached a position of strength and now act freely in various areas of public affairs. They employ thousands of young people and are financially supported by the United States and Europe. The NGOs are part of their funders’ foreign policy and a tool to influence internal politics and national decision-making.”

In this context, Ben Salama said, “We absolutely do not reject the existence of these organizations. We welcome them. But we want them to respect the constitution, the laws and the dignity of the Tunisians. They must know that they are simply organizations that are dealing with a fully sovereign state. They play useful roles in funding important projects and in providing experience and training. But they must be monitored so that their work does not deviate from its purpose. Tunisia agrees to cooperate with them to achieve this purpose, which is in the interest of our country. However, we do not agree to their practicing politics in Tunisia and turning into a political party that is even stronger than our parties or interfering with our choices. Otherwise, let them allow us to interfere in the affairs in their governing institutions, in their funding and their internal elections.”

He added, “With all due respect to some organizations, we welcome them on our terms, but we do not trust some of them based on our monitoring of their activities and practices — although we would have accepted their positions if they showed a minimum of professional standards and objectivity all the time. But unfortunately, we noticed that their positions have been determined by the interests of their countries since they entered Tunisia during the 2011 elections. For example, the Carter Center, despite its professionalism previously, its superficial and boilerplate positive assessment of the failed 2014 elections was completely different from our assessment as [organization] 23_10.”

The debate about the role of foreign NGOs in Tunisia remains open. Some consider them mere tools in the hands of the states that fund them and part of those states’ foreign policy, which is aimed at influencing local decision-making and threatening the independence of the national decision-making. Others consider them as contributing to the development of public affairs, to the employment, supervision and training of young people, and to the success of the democratic transition phase experienced by the country since 2011.