Tunisia cracks down on NGOs

The Tunisian government has ordered nongovernmental organizations to disclose all of their foreign funding in what some see as an attempt to suppress the civil society sector. 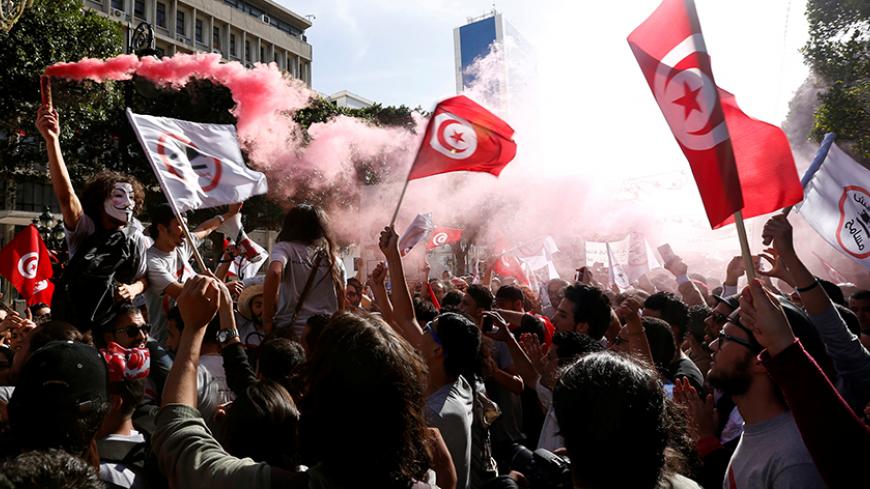 Demonstrators hold flares during a demonstration against a bill that would protect those accused of corruption from prosecution on Habib Bourguiba Avenue in Tunis, Tunisia, May 13, 2017. - REUTERS/Zoubeir Souissi

On June 12, the Tunisian government issued a statement ordering all nongovernmental organizations (NGOs) to declare all funds they receive from abroad and threatened to prosecute any party that failed to comply. The move, unprecedented since the fall of President Zine El Abidine Ben Ali in 2011, has sparked controversy in the local civil society sector.

Some in this sector saw it as within the scope of the anti-corruption campaign announced by the government on May 23, while others saw it as an attempt by the executive branch to control civil society.

In its statement, the government called on NGOs to disclose "all foreign funds they receive and explain their source, value and purpose in a media outlet within a month of the date of the statement, in accordance with the provisions of Article 41 of Decree No. 88 on the organization of NGOs issued in 2011."

It also called on NGOs to apply Article 44 of the same decree, which states, “Each association benefiting from public funds shall provide an annual report to the Accounts Department including a comprehensive detailed description of its funding sources and expenditures.”

Since the fall of Ben Ali's regime in 2011 and the prevailing climate of openness in the country, NGO activities have flourished in various parts of the country and many sectors.

Independent political analyst Mondher Bedhiafi told Al-Monitor, “20,000 NGOs operate in Tunisia, according to the data issued by the government’s IFEDA Center on May 27, 2016. Most of them carry out religious and preaching activities and emerged like a tsunami after the revolution. They benefited from the leniency shown during the rule of the Ennahda movement between 2012 and 2013. Official statements by Tunisia's Minister for Government Relations with Civil Society Kamel al-Jandoubi indicate that since 2015, many of these religious associations have been involved in sending thousands to war and conflict zones and maintaining relations with terrorist groups.”

Tunisian parliamentarian Leila Chetawi was dismissed on May 19 as head of the parliamentary commission of inquiry into the recruiting of young Tunisians by armed groups abroad. On the same day, against the backdrop of disputes within the ruling party Nidaa Tunis, Chetawi revealed to the Tunisian news website Akherkhabaronline, "After receiving foreign funding, some religious and charitable associations are suspected of recruiting and transporting Tunisian youths to war zones.”

Human and civil rights activist Sami Ben Salameh believes that nontransparent NGO funding represents a major problem in Tunisia. Despite the importance of foreign funding in ensuring the continuity of vital NGO activities, questionable funding by foreign parties often leads to controversies related to national security and to the independence of NGOs.

Ben Salameh told Al-Monitor, “Ong23-10, for the support of the democratic transition path, in which I am a member, decided upon its establishment in 2011 to refuse any foreign or government funding so as to preserve its independence. But this has limited its activity and efficiency. Foreign funds are crucial for the Tunisian civil sector since they finance the activities of some serious NGOs and allow them to perform great services in terms of raising awareness and encouraging involvement in public affairs and political life through well-funded programs. Foreign funds also allow NGOs to carry out activities ensuring the right to education, women’s rights and other human rights. However, these funds create political and security dilemmas. They are ultimately used as a means of influence by foreign forces to defend their interests in Tunisia and interfere in the country’s internal affairs. "

He noted that he does not believe that the government seriously intends to scrutinize all foreign funding directed to Tunisian civil society organizations, pointing out, “This move is part of sporadic measures in the context of the war on terror and concerns NGOs financed by some Gulf countries that are suspected of acting as a facade to cover the financing of terrorism-related activities.”

Ben Salameh continued, "Foreign financing is not limited to Gulf countries. We have been witnessing since 2011 a huge inflow of large amounts of money from US and European sources aimed at controlling the course of democratic transition in Tunisia in light of the absence of any oversight by the state apparatus.”

Since 2011, after the Tunisian revolution left the country more politically open, the civil society sector became one of the most important platforms for key players in public affairs.

Under Decree No. 88 of 2011, NGOs are allowed to receive funds from abroad for their activities. The act endowed civil society with great financial resources.

Bedhiafi noted that the Tunisian government will face several challenges in addressing the issue of foreign funding, including the difficulty of prosecuting suspicious activities by NGOs in court. “NGOs are likely to win any judicial proceedings aimed to dissolve them or suspend their activities for lack of appropriate evidence,” he said.

Salameh said, “It is difficult to make a distinction between addressing security and sovereignty-related problems ensuing from the foreign funding of NGOs and using these problems as a pretext to introduce amendments to the law to restrict the civil society’s role.”

He noted, “Any amendment of Decree 88 requires careful and cooperative study, in such a way as to preserve the sovereignty of the state and ensure that the authorities cannot cover up any crimes committed by their agents against the citizens. Some organizations are working on monitoring such abuses.”

Article 35 of the Tunisian Constitution provides for the “freedom to establish political parties, unions and associations.” Article 49 reads, “The limitations that can be imposed on the exercise of the rights and freedoms guaranteed in this constitution will be established by law, without compromising their essence. Any such limitations can only be put in place for reasons necessary to a civil and democratic state and with the aim of protecting the rights of others, or based on the requirements of public order, national defense, public health or public morals.”

Tunisia has undergone major challenges since 2011, many of them closely linked to national security. Successive governments since the departure of Ben Ali have found themselves in deadlocks, unable to balance individual, economic and social freedoms against maintaining internal security.