Although a significant number of women won in the May 6 municipal elections in Tunisia, female politicians still have a long way to go to make it to the presidency. 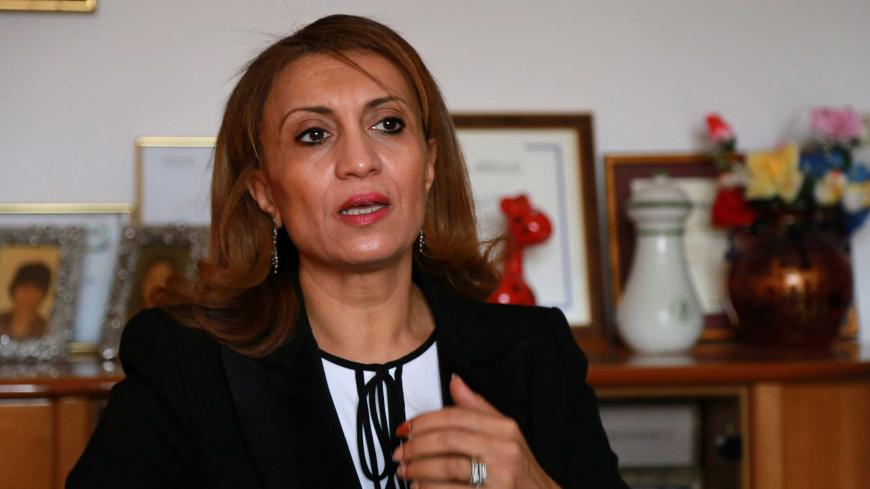 Souad Abdel Rahim, a member of the Islamist Ennahda party and head of its Tunis list in the 2018 municipal elections, speaks during an interview at her office in Tunis, Tunisia, May 9, 2018. - ANIS MILI/AFP/Getty Images

TUNIS, Tunisia — The Independent High Authority for Elections said May 9 that Tunisian women accounted for 47.7% of the total number of winners and headed 29.55% of the lists in the May 6 municipal elections. These elections, the first after the ousting of the Zine El Abidine Ben Ali regime, constituted a great opportunity for young women in Tunisia to make history and fill positions in political decision-making circles and local government.

The local elections law adopted in 2014 has given way to an unprecedented participation of women, candidates under the age of 35 and people with special needs. The law provides for the principle of gender parity, and this was the first election in the history of Tunisia to have equal numbers of male and female candidates on party, independent and coalition lists.

Souad Abdel Rahim, a 53-year-old pharmacist and member of the Ennahda party’s political bureau, headed her Islamist party’s list for the municipality of Tunis, which won the most seats in the capital with 21, while the secular Nidaa Tunis party won 17. The local council has 60 seats.

Abdel Rahim told Al-Monitor, “We hope a woman can fill the position of president or prime minister for the first time in the elections that will be held in 2019,” while saying that the patriarchal view that still prevails is preventing her from becoming the first woman to head the Tunis municipality.

She also condemned violence against women and attacks on female candidates for either wearing the veil or not wearing one.

In a May 8 interview with privately owned M Tunisia TV, Nidaa Tunis leader Fuad Bouslama ruled out the possibility of reaching a consensus with Ennahda for Rahim to head the the Tunis municipality, saying, “If a woman were to serve as sheikh of the city of Tunis, it would be contrary to religious traditions. We are an Islamic country.”

However, these views were rejected by Nidaa Tunis' central committee in a May 9 statement, which said Bouslama’s words “were his own and do not represent the party.”

Ennahda, which won 2,135 seats out of over 7,100 (nearly 30% of the vote) and Nidaa Tunis, which won 1,595 seats (22% of the vote), may battle over the presidency of Tunis municipality through negotiations with other council members.

Nationwide, independents won nearly 33% of the vote. The opposition-affiliated Popular Front, a coalition of 11 leftist and nationalist parties that has 15 deputies in the parliament elected in 2014, won 259 local seats (3.6% of the vote).

Najwa al-Rizqi, who headed the Popular Front list in the municipality of Wadi al-Layl in Manouba governorate, told Al-Monitor that it is an electoral injustice that women will have slimmer chances of making it into the next parliament than to win seats in local elections. The 2014 law on parliamentary elections does not stipulate gender parity.

Rizqi added, “There aren’t many women in decision-making circles since not many actually take part in public affairs, in addition to the lack of awareness among a significant group of women of their political rights. Meanwhile, political parties and government bodies undermine women's roles in leadership and advanced government positions.”

There are no women in Tunisia who currently head a political party, and women have never held the post of president or prime minister since the country gained its independence in 1956.

Iman al-Amer, a winning candidate for Nidaa Tunis in the Manouba governorate municipality of Bordj El Amri, where Nidaa Tunis got the most the votes, attributed the increasing representation of women in the municipal elections to the Tunisian people's awareness of the importance of females in political life. Tunisian women have fought many battles in various fields in order to preserve the country’s gains, which were threatened at certain points after the 2011 revolution, Amer said.

After Ennahda won power in 2011, a debate emerged in Tunisia on the inclusion of Sharia as a main source of the constitution. This debate raised concerns that such a move would threaten Tunisian society, which is governed by the Code of Personal Status and other legislation and texts stipulating the prohibition of polygamy, the right to education and employment and a recognition of gender equality.

Amer told Al-Monitor, “Through my victory I will implement the provisions of the local elections law — which was ratified by the Tunisian parliament in accordance with the constitution of the revolution — to pave the way for struggling Tunisian women to contribute to democratic transition.”

Bochra Belhaj Hmida, head of the Individual Freedoms and Equality Committee, told Al-Monitor that there is a significant percentage of women in the Assembly of the Representatives of the People (parliament), as their number rose to 73 deputies in 2014, 34% of the total. There had been 49 women deputies in the Constituent Assembly, which was dissolved and replaced by the Assembly of Representatives in 2011.

She said, “The percentage of women in parliament and in the municipal councils has significantly risen after the state committed to the constitution of the revolution’s decision to ensure equality in elected bodies.”

Belhaj Hmida added, “The representation of women in the executive structures, within the Tunisian administration and in the structures of civil society, however, remains weak. The absence of political will on the parties’ part requires a greater effort to establish equal opportunities and achieve equality between women and men.”

She added, “The law of associations and the law of parties must be amended in order to establish the principle of gender equality."

According to statistics published by government daily Al-Sabaah on Nov. 18, 2017, the percentage of women in Tunisian parties is about 23%. Women were also largely left out of the reshuffle of governors carried out by Prime Minister Youssef Chahed’s government, as only one female was appointed among 24 governorships.

At the same time, Tunisia is one of the leading countries in the Arab world in promoting women's rights. The Tunisian Code of Personal Status prohibited polygamy and aimed for full gender equality; it was adopted in 1956 under Prime Minister Habib Bourguiba, who the next year became the first president of the Republic of Tunisia and served until 1987.