Tunis' city council has elected its first female mayor from the Ennahda movement, yet some critics are wary of whether the new mayor will be a strong advocate for women. 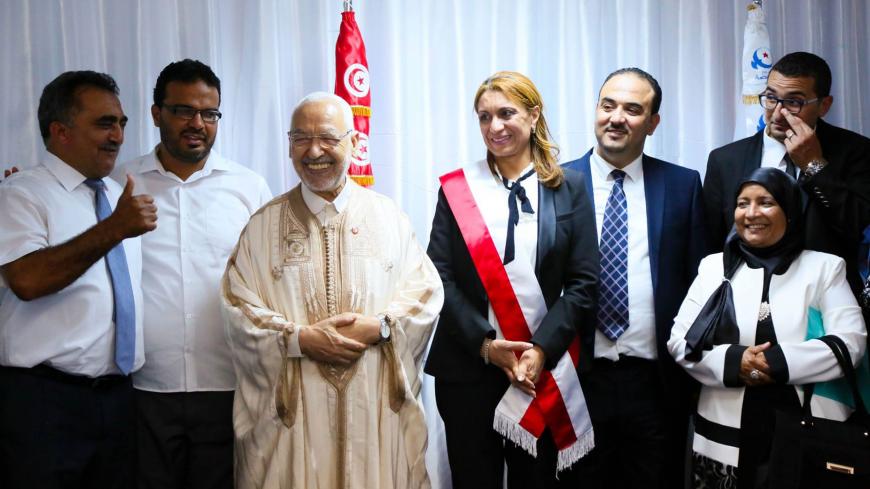 Souad Abdel Rahim of the Ennahda movement was elected mayor of Tunis on July 3, the first female to hold the title since the Tunis municipality was established in 1885.

During the first round of city council elections, Abdel Rahim was granted 26 out of 60 votes, with male candidates from Nidaa Tunis, the Popular Front and the Democratic Current also competing. They obtained 22, four and eight votes respectively.

The second round of voting was limited to Abdel Rahim and Kamal Idir of Nidaa Tunis. Abdel Rahim won, with 26 votes to Idir's 22, following the withdrawal of the the Popular Front’s and the Democratic Current’s 12 municipal members from the voting session due to their reservations about the two candidates.

On May 6, Tunis elected its 60-member municipal council. Ennahda came first, with 21 seats; 17 for Nidaa Tunis; eight for the Democratic Current; six for the Popular Front; and four for the independent list of Madinati (My City).

Abdel Rahim, 52, a pharmacist and mother of two, told Al-Monitor that her victory is a victory for all Tunisian women, regardless of their political and ideological affiliations.

Abdel Rahim, who hails from the Sfax governorate in southern Tunisia, said, “I am glad to be the first Tunisian woman to have access to this high position, following the decadeslong monopoly of men, and to be also a candidate for Ennahda and the popular base that placed their trust in me.”

In a July 3 Facebook post, Naziha Labidi, the minister of women's affairs, congratulated Abdel Rahim on her win. “It reflects a keenness to establish women’s rights and endorse equal access [of men and women] to decision-making positions.”

Foued Bouslama, a leader of Nidaa Tunis, told M Tunisia TV channel May 8 that electing a woman to head the capital’s municipality goes against religious traditions.

He said that “having a woman mayor of Tunis is not part of our Islamic traditions. It is unacceptable for her to attend the mosque on the Night of Decree [during Ramadan], as she has to accompany the other [male] mayors, as the protocol requires.” Normally on that night, mayors attend mosque together, but there are different areas and rituals for men and women.

Abdel Rahim’s victory produced reactions within the feminist circle, with a number of women’s rights activists expressing reservations on her election.

Feminist activist Saloua Charfi called on Abdel Rahim’s supporters to refrain from demanding that “progressives” endorse her because she is woman.

She explained in a July 3 Facebook post, which she later deleted, that Abdel Rahim is affiliated with Ennahda, “a party espousing an obsolete ideology that does injustice to minorities and women.”

Theater actor Leila Toubel mocked Abdel Rahim for dedicating her victory to Tunisian women. Toubel wrote in a May 8 Facebook post, “Free Tunisian women; do not accept gifts from the Brotherhood.”

Yosra Fraoues, the president of the Tunisian Association of Democratic Women’s, told Al-Monitor that she hopes Abdel Rahim contributes to the promotion of women’s fair causes and gender equality while in her new post.

Fraoues expressed reservations about Abdel Rahim’s silence on women's equal right to inheritance, which feminist activists are fighting for.

Sociologist Sami Brahem believes that the fact that women are heading municipal councils in Tunisia’s provinces is a manifestation of the principle of equality set out in Article 46 of the constitution. “The state works to attain parity between women and men in elected assemblies,” he said.

He told Al-Monitor, “Ennahda was the most to mirror the principle of equality in the municipal elections, as stipulated under the constitution. Out of 350 municipalities where Ennahda is represented, women of Ennahda lead 48 of them, most notably the Tunis municipality.”

Brahem said that the controversy — ignited before Abdel Rahim’s candidacy and after she was elected — has given this milestone another dimension, because it is the first time a woman mayor, hailing from outside the capital, has chaired Tunis' municipal council.

“Abdel Rahim reaching the post of mayor of Tunis produced a debate over the right of a person from a particular social class and particular region to have access to the post of mayor of Tunis," he said. "This post was long limited to aristocratic families hailing from the capital itself. This being said, Abdel Rahim’s victory has turned into an unprecedented historical event that has broken the aristocratic patriarchal mentality that had monopoly over this post.”

Brahem said that leftist feminists lambasted Abdel Rahim because she is a close associate, albeit not a member, of Ennahda. He believes they should applaud the success of a Tunisian woman attaining such a post of historic importance.

Between the applause and the reservations, observers believe that the actual test of Abdel Rahim will be on the ground. How she will handle issues of local governance and harmony between her and the municipal council’s members will be decisive in light of the existing sharp political and partisan bickering.