The Tunisian parliament approved a new law on municipal elections, which granted military and security members the right to vote and raised concerns that the decision threatens the institutions' neutrality. 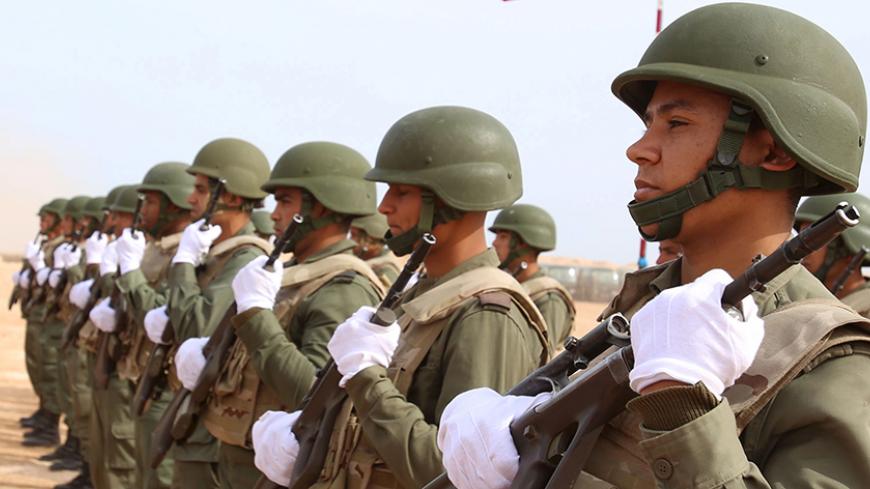 On Feb. 2, the Tunisian parliament approved a law related to local and municipal elections, granting members of the security and military institutions the right to vote for the first time in the country’s history. This precedent sparked controversy in Tunisia, as some people believe that military officers should enjoy the right to vote, just like their fellow citizens, while others believe that passing such a law will jeopardize the impartiality of the military institution and will involve it in political affairs.

After years of complete neutrality in political and electoral life, Tunisian soldiers, officers and security members will cast their votes in the upcoming municipal and local elections. Chapter 6 of the new local electoral law states that “military and security officers are allowed to vote in local and municipal elections only.” But this law contradicts Article 18 of the Tunisian Constitution, which states, “The national army is a republican army charged with the responsibility to defend the nation, its independence and its territorial integrity. It is required to remain completely impartial.”

The law also contradicts Article 19 of the constitution, which states, “The national security forces are responsible for maintaining security and public order … with complete impartiality.”

In this context, Sami bin Salameh, a former member of the Independent Higher Authority for Elections in Tunisia, told Al-Monitor, “Security and military officers, as well as members of the armed forces, are special citizens. For that reason, we must always adapt their rights as citizens to the respect of principles related to security and military life, hence discipline, loyalty, neutrality and readiness to serve. Granting them the right to vote in elections — even if only municipal — is a dangerous process that could affect these four principles, interfere with their work and involve them in the political arena in spite of themselves. After all, Tunisia is still living an incomplete transitional phase plagued by difficulties and violation attempts from parties.”

The military institution has yet to issue a comment on the law, as its members are quite reserved and do not disclose their opinions to the media.

Salemeh pointed out the security hazards of granting security and military officers the right to vote, saying, “Their votes will reveal their political and ideological affiliations, in addition to disclosing their identities and where they are based due to their registration on electoral lists.”

Tunisia has been the stage of several terrorist operations since 2011, some committed by jihadi groups affiliated with al-Qaeda such as Uqba Bin Nafi Battalion and others by groups pledging allegiance to the the Islamic State. These terrorist acts have claimed the lives of more than 220 security officers and soldiers and 98 civilians, as per a survey conducted by local website Inkyfada. The latest of such attacks targeted a military vehicle in Jebel Samama, in the west of the country, and killed three soldiers in August 2016.

Political analyst and journalist Abdel Sattar al-Aidi told Al-Monitor, “Granting security and military officers the right to vote in local and municipal elections only — rather than in legislative and presidential elections — constitutes a good test for their discipline and commitment to complete neutrality in politics. At the same time, it allows them to enjoy their right of citizenship, especially given that the constitution affirms total and indiscriminate equality — including professional indiscrimination — between citizens and guarantees all Tunisians the right to vote.”

Aidi added, “The assessment of the upcoming municipal elections will be important and useful. If the country finds it difficult to maintain the military and security institutions’ neutrality after granting their members the right to vote, the law will be amended and the article that allows them to vote will be annulled. You never know until you try. If need be, the new electoral law will be amended to suit the needs of society and the state.”

Fida Nasrallah, the director of the Carter Center in Tunisia, which had specialized in electoral monitoring, supervising the drafting process of the constitution and putting in place the elections’ legal framework, told Al-Monitor in a previous interview Oct. 12, “Depriving them [military officers and internal security staff] of their right runs contrary to the international obligations of the Republic of Tunisia under the international covenant of the United Nations on civil and political rights. In addition, it is contrary to Article 21 and Article 34 of the Tunisian Constitution.”

Nasrallah said in the same interview, “The fear that the army will not remain neutral and that the vote may be manipulated is an obsession shared by many countries. But these concerns can be reduced by adopting certain measures, not by categorically denying the rights of the armed forces.” The Carter Center had urged the Tunisian parliament in a statement Sept. 28 to grant the military and security forces the right to vote.

The Islamist Ennahda movement first objected to granting military and security officials the right to vote in elections, only to vote later in favor of the new law Jan. 31. Apparently, Islamists are sensitive to the military institution, given its history in the region. In Egypt, for instance, former Muslim Brotherhood-affiliated President Mohammed Morsi was toppled by his defense minister, Abdel Fattah al-Sisi, on July 3, 2013. In Turkey, a group of army officers spearheaded the failed coup attempt against Islamist President Recep Tayyip Erdogan on July 15, 2016.

When the electoral law deliberations took flight in September, former officers in the Tunisian army objected, sayting this could potentially cause division in the security and army ranks. Meanwhile, secular parties, especially the Popular Front, which includes 11 parties; leftist, environmental and national groups; and the liberal Afek Tounes Party welcomed the law.

The upcoming elections will be the basis for deciding whether allowing the military and security officers to vote in municipal and local elections was the right thing to do. Still, the concerns of the opponents of this law are justified. Involving the security and military institutions in political life — even if for a good cause — might risk the future of a country still treading carefully toward democracy while fighting an open war against terrorist groups on its eastern borders with Libya and western borders with Algeria. But, at the same time, the upcoming elections will practically test the internal security and military institutions’ ability to maintain their discipline and respect for the neutrality principle stipulated by the constitution while practicing their right to vote.