Can Russia, the US find new basis for cooperation in Syria?

A US-Russian quid pro quo in Syria may still be possible if the parties get down to the nitty-gritty of their respective interests in the country. 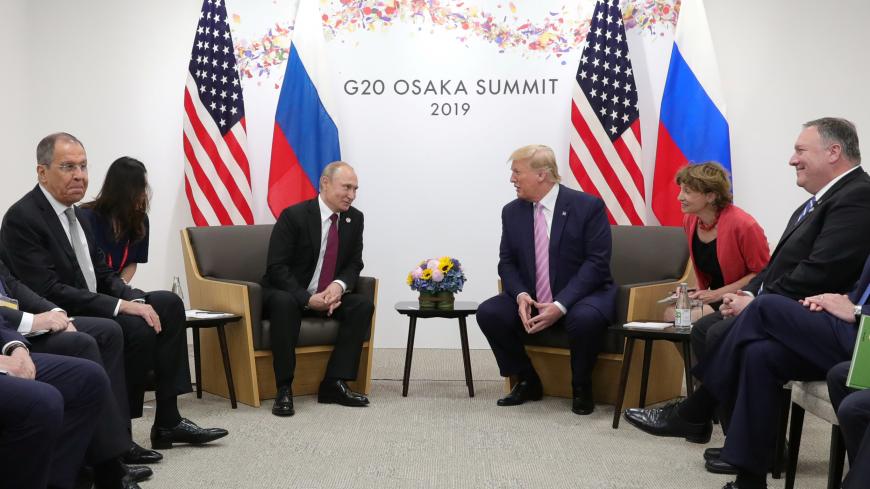 Recent contacts between the leaderships of Russia and the United States at the G-20 summit in Osaka and the tripartite Israel-Russia-United States national security meeting in Jerusalem were followed by dynamic “diplomatic traffic” in Damascus.

Despite heated public rhetoric and US sanctions on Russia, both Washington and Moscow are seeking mutually appropriate modalities and modes of coordination in Syria. This reflects the Donald Trump administration’s obsession with deterring Iran and securing Israel’s interests in the Eastern Mediterranean. The latter include:

Despite the lack of a unified approach within the Trump administration toward engagement with Russia in Syria, the United States is weighing possibilities for coordination with Moscow on all of the above-mentioned challenges. In turn, Moscow may try to use dialogue with Washington for its own political and economic calculations; most importantly speeding up Syria’s economic reconstruction. Russia’s desires may also include: stabilization in southern Syria, adjacent to Jordan, ensuring America’s nonhostile position on the Russia-led Syrian constitutional reform and Russia's efforts for the return of Syrian external refugees.

However, as of now, the No. 1 priority for Moscow is to reduce Washington’s opposition toward the restoration of the economic integrity of Syria. This means initiating business cooperation between Damascus and US-friendly Kurds and local Arab tribes in eastern and northeastern Syria, possibly under Arab Gulf states’ financial sponsorship. In this respect, the Sunni Shammar and al-Shaitat tribes played an important role in the creation of the Syrian Democratic Forces (SDF). The latter dominates the access to Syria’s oil, agricultural lands and water resources, while the government controls the oil and gas infrastructure, including Baniyas oil terminal and all of the ports. But control over the key General Petroleum Line is equally shared between the SDF and the government, which creates a stalemate when neither party can fully use its respective advantage over the other. In order to get any feasible profits, the parties have to come to an agreement.

Under such circumstances, the palette of the imperatives outlined in 2017 of US donor engagement in Syria is increasingly obsolete. Back then, donor engagement was formulated in four slogans: bypass Damascus and focus on regions out of the government’s reach; go local to design reconstruction as a bottom-up process aimed to enhance the autonomy of local actors (de facto, the Kurds); go small in areas not run by the government, where destruction was less severe than in the major urban centers of western Syria; move slow to minimize the number of poorly designed projects; and avoid flooding communities with resources they cannot absorb.

The Kurds are still disturbed by the loss of Afrin to Turkey — a move they believe occurred due to a Russian green light and tacit US consent. Besides, they fear they will be stripped of real economic benefits amid Trump’s unfounded declaration in December 2018, regarding the need for Saudi Arabia to assume the US role in Syria’s reconstruction. These fears are further exacerbated by national security adviser John Bolton’s earlier idea to unite the Kurds of post-Islamic State Syria and Iraq into one state (“Sunnistan”). Such a state would dominate local mineral, water and agricultural resources under the financial patronage of Gulf states. US officials, however, never confirmed such ideas, nor are they broadly shared by the expert community.

Taking into consideration Russia’s historical ties with the Kurdish diaspora, Moscow is capable of helping to build useful business partnerships between northeastern and eastern Syria and Damascus, which can also positively affect the process of national constitutional reform.

In sum, Russia and the United States, together with Israel and the Gulf states, regardless of their opposing attitudes to Assad, still share common goals and interests in Syria. The Iran-controlled “crescent,” which embraces Iraq, Syria and Lebanon, is a nightmare to the Americans, Israelis and Arab Gulf monarchies. Moscow, in turn, views Iran as a strategic partner in Syria, yet it is anxious about Tehran’s unilateral attempts to cultivate proxies among the Syrian military and security services, as well as business and religious communities, that further fuel Russian-Iranian competition on the ground.