Russia has a lot less incentives to bargain over Iran than the United States believes. 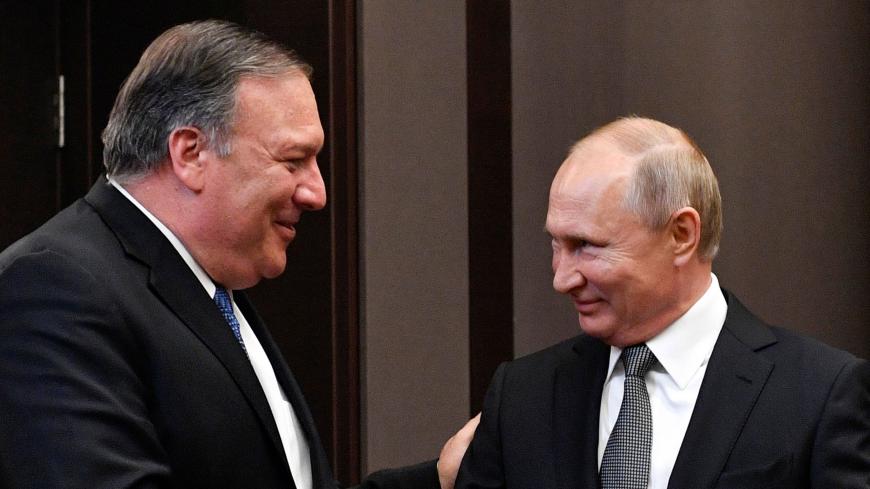 Russian President Vladimir Putin meets with US Secretary of State Mike Pompeo at the Bocharov Ruchei residence in Sochi, Russia, May 14, 2019. - Alexander Nemenov/Pool via REUTERS

The latest intensification of the US-Russian dialogue has revived speculations that Moscow could use Iran as a bargaining chip in its relations with US President Donald Trump. The argument usually goes that Moscow could withdraw its political support for Tehran in exchange for the ease of American political and economic pressure on Russia itself. Yet these suggestions should be taken with a grain of salt.

Indeed, the May 15 visit of US Secretary of State Mike Pompeo to Russia was — without exaggeration — welcomed by the Kremlin. After the report to the commission by special prosecutor Robert Mueller in March, the Russian authorities expected the communication channels with the United States to receive a new boost. Pompeo’s visit to Sochi was meant to set up a "businesslike approach," and in the meantime have Russians and Americans more inclined to make compromises. To achieve such compromises the two sides should have bargaining chips. Iran was thus seen by the US authorities as one of such “exchange assets” in the Kremlin’s arsenal.

A stream of associated speculations shortly followed the Pompeo visit. Bloomberg reported Russia’s alleged rejection to provide Iran with S-400 missile complexes. Others argued that Moscow might see some benefit from the increased pressure on Iran given Moscow’s own interests in the global oil market. The conventional wisdom of this theory suggests that a drop in Iran’s oil exports could give Russia an excuse to insist on the rise in its oil production quota within the so-called Vienna agreement, a deal between OPEC and some non-OPEC countries led by Russia to limit their oil output in order to ensure high oil prices. This, in turn, would allow the Kremlin to increase output — something Russian oil producers, and especially the state-owned Rosneft, have demanded repeatedly while criticizing the deal with OPEC and the imposed production quotas.

Yet a number of events that followed Pompeo’s visit to Russia proved that Moscow is not ready to back the US “maximum pressure” strategy, let alone regime change in Iran.

On June 18, a meeting of the joint Russian-Iranian Commission on Trade and Economic Cooperation in Esfahan showed Moscow's intention to develop economic cooperation with Tehran despite US sanctions.

In addition, when taking the decision July 1 on the extension of the Vienna agreement, Russia clearly took into account Iran’s interests and did not use the situation in its favor, despite respective fears in Tehran that it would.

The Kremlin indeed tried to exchange its pro-Iranian stance for the sake of better relations with the West twice before: in the 1990s and 2000s. Buy nothing good came out of it. The latest overture to the West at the expense of Iran came in 2009. The Medvedev-Obama “reset policy” implied — even if by default and not by written consent — Russia’s scale-down of its partnership with Iran. Thus, in 2010, Russia rolled back its agreement to provide the S-300s to Tehran. This, in turn, contributed to the historic distrust between Russia and Iran and exacerbated Tehran’s suspicions of Moscow. At the same time, the "reset" also failed leaving Russia with no gains in relations with the United States that could have justified its "losses" with Iran.

In addition to the Syrian crisis, Moscow and Tehran collaborate on a wide variety of issues, from energy to security in the Caspian region and Central Asia. Russia is as much interested in these interactions as is Iran. Moscow remembers clearly that it was due to its effective cooperation with Tehran that helped stop the bloody civil war in Tajikistan in the early 1990s. Tehran’s stance on the Russian war with Georgia in 2008 was also seen in the Kremlin as de facto pro-Russian. Finally, it would have been hard to adopt a Moscow-backed framework agreement on the legal status of the Caspian Sea without the Iranian consent in 2018. As a result, Moscow can’t afford spoiling its dialogue with Iran.

It is also unclear what the United States could offer Russia at this point. While Trump claims the findings of Mueller’s claim prove the absence of “collusion” with the Kremlin, Russia’s image has not gotten any better in American politics, the mainstream media and within the establishment. With just over a year left to the US election, there is not much the US president can offer Russia that would not raise political costs in the run-up to the election in 2020. Improving relations with Russia would mean reconsidering US policies on a number of key issues including the annexation of the Crimean Peninsula, Russia’s supported war in eastern Ukraine and the interference issue.

Therefore, Russia stays the course of continuing to expand its agenda with Iran with an eye on qualitatively improving them. The meeting of the joint commission in Esfahan also showed that Moscow is willing to intensify its economic contacts with Iran and even help it evade US sanctions. In 2018, despite US pressure, Russian-Iranian trade was maintained at the level of 2017 and amounted to $1.7 billion.

Moreover, during the first half of 2019, the bilateral trade demonstrated positive growth trends giving hopes that by the end of this year the trade level between the two countries might go well above $2 billion. Russia leverages to mitigate the negative effect of the US sanctions on Iran’s economy are seriously limited, but they are not nonexistent.

Currently, Moscow is looking for potential areas of cooperation that cannot be directly affected by the sanctions. For instance, Russia plans to increase its export of agricultural produce that might have key importance for the food security of Iran including the supplies of Russian grain and meat. Moreover, together with Kazakhstan, the Russian authorities have ambitious plans to turn Iran into the trading hub for its wheat to reach other markets of the Middle Eastern and South Asian region.

The Kremlin continues being interested in developing cooperation in the oil and gas sphere. Thus, Gazprom stated its intention to help Iran in developing its gas infrastructure whereas Russian business is discussing potential joint oil projects in the Caspian Sea. For now, the area of investment cooperation focused on the construction of the Bushehr power plant, the construction of the Sirik power plant (started in 2017) and Russian Railways projects — but Russia sees ways of expanding its projects in the country. The key importance for the development of further cooperation will have the intention of the two sides to handle the issue of financial transactions. For now, the idea is to strengthen direct ties between the Russian and Iranian banking systems and partially avoid the use of "third currencies" (first of all, the US dollar) in their transactions.

Moscow has also learnt a lot from its experience of helping Venezuela to stand against the US pressure and can use this experience in Iran. For instance, Moscow and Caracas established the direct banking connection and they are using the Russian ruble in their transactions. Russia also plans to trade Venezuelan oil. Caracas will be providing Russian oil trades with its crude at a discount price or/and as a payment for Russian supplies. This oil will not go to Russia itself. Instead, Russian companies will be selling it to China, India or other buyers. In early 2019, similar schemes were offered to the Iranians. In exchange for its help Moscow demanded the increased presence in Iran’s oil and gas sector. However, the Iranian side almost openly declared that it was not interested in the Russian help as it believed that the European Union would protect Tehran from the US pressure. This was taken as a personal offence in the Kremlin. Yet Moscow might offer its help once again for the same high price for Iran now that Tehran’s options have narrowed.

The future of Russian-Iranian relations is very much dependent on the outcomes of the US-Iranian stand-off. Moscow is not going to pressure Tehran for better relations with the United States, but it can play the role of mediator. If, however, the crisis continues to smolder and Iran is ready to provide Russia greater access to its economy, Moscow can start gradually increasing Iran’s support via the participation in the gray schemes of sanctions evasion and provision of limited diplomatic support.