Will US sanctions sway Iran to enter oil deal with Russia?

Iranians in general do not trust Russia, but their government may be looking into various oil deals with Moscow to work around US sanctions. 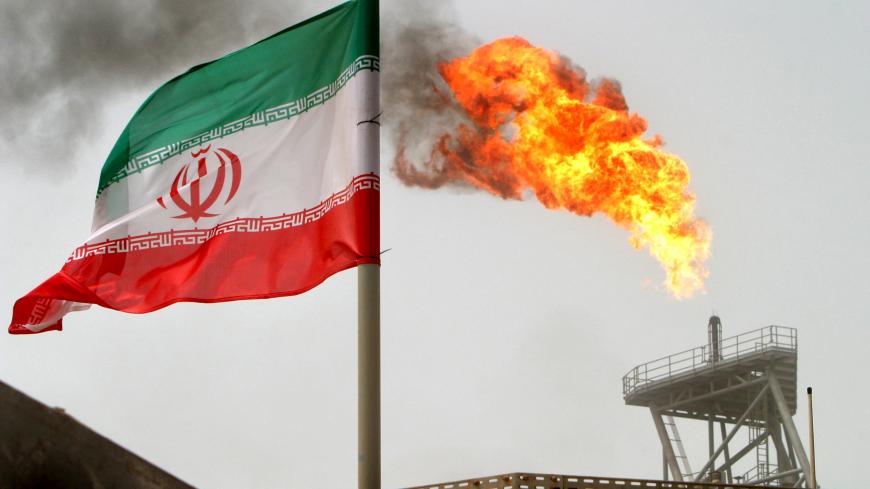 A gas flare on an oil production platform in the Soroush oil fields is seen alongside an Iranian flag in the Gulf, July 25, 2005. - REUTERS/Raheb Homavandi

Recent statements by the Israeli media that Iran might start selling oil to Russian refineries to evade US sanctions should be taken with a grain of salt. Cooperation with Russia in the oil sector is not Iran's first choice, but rather a plan B to be implemented only if there are no other alternatives left. In addition to presenting daunting technical and economic obstacles, any oil deals with Russia would face severe resistance from the Iranian public.

It is not the first time Israeli media sources have made controversial statements regarding the Russian-Iranian dialogue. There is even a chance they could be right in saying that Tehran and Moscow are discussing ways to help Iran secure access for its oil to the international market. Russia's oil minister did officially state it would be "unfair" to deprive Tehran of such access. However, in the past six months, Russian officials have not once suggested potential options to secure Iran’s interests in this field.

But let's examine the possibilities. All of Russia’s initiatives — real and suspected — have certain specifics.

First of all, potential scenarios on how to help Iran evade the oil embargo would not be limited only to the idea of Moscow purchasing Iran’s oil for Russian refineries. There were rumors that Iran could sell its oil to Rosneft, which would channel it to the Vadinar refinery in India. Some experts speculate that Moscow might either mix Iran’s oil with its own, or transport it through Russian territory for Iran, as moving oil via maritime routes will become difficult for Tehran after the sanctions are reimposed in November. Yet the Kremlin does not seem to be seriously considering either option.

Importing Iran’s oil would not make any economic sense for Moscow: Russia has enough of its own resources to satisfy the needs of its refineries, and Iran’s oil is expensive and transport expenditures would also be high. Some market analysts say the only way for Iran to interest Russia in an import deal would be to provide Russian companies with a 10% (ideally, 30%) discount on the oil and ensure massive exports to Russia, as small batches would be unprofitable. Russia would need to pay for this oil in hard currency. The financial situation of Russian oil producers is difficult and they might not be ready for this — although there is a possibility Moscow could persuade Iran to use this money to pay it back for industrial equipment Tehran has imported.

However, the primary problem would not even be the doubtful profitability, but rather logistics. Iran’s oil fields are in the south. To reach Russia, the oil would have to make its way to Caspian ports in the north. Iran has no main pipelines connecting its southern oil fields with northern ports. These ports do have the infrastructure for oil, but they were built to receive oil from swap deals with Kazakhstan, Russia and Azerbaijan. They were never meant to export oil.

Consequently, before any exports could begin, Moscow and Tehran would have to invest in creating the necessary storage and loading infrastructure at the Iranian ports. Iran would also need to upgrade its transport infrastructure to deliver oil from the south to the Caspian seashore — that would also present a challenge.

Finally, Russia and Iran would have to substantially increase their tanker fleets in the landlocked Caspian Sea to exchange large quantities of oil, as the local geography does not allow for the use of large tankers. In this situation, a planned railroad connection between Russia and Iran via Azerbaijan could increase the volume of oil moved from Iran to Russia, but this project has not been completed.

Under these circumstances, Russian officials are demonstrating far greater interest in resuming the so-called oil-for-products program, under which Russia would broker Iranian oil abroad in exchange for Iran buying Russian industrial machinery and providing investment opportunities to Moscow.

Russia and Iran have discussed an oil-for-products initiative for years. Initially, it was supposed to help Tehran evade the oil trade embargo imposed by the United States, European Union (EU) and their partners. When those sanctions were lifted as part of the 2015 nuclear deal, the initiative was expected to compensate for Iran's lack of financial reserves, which kept Tehran from paying for imports of Russian equipment in hard currency. However, after US President Donald Trump withdrew from the deal in 2018 and began reimposing sanctions, the oil-for-products deal again gained importance as a way to evade sanctions.

In November 2017, Moscow received 1 million barrels from Iran as payment for railroad equipment imported from Russia, and arrangements were in the works for Russia to buy an additional 5 million tons of oil in 2018. Indeed, in January and February there were reports of some oil dispatches transferred from Iran to Russian companies. Yet, by March, they stopped. Moscow still plans to revive the deal in 2019, though it might never happen.

On the one hand, Russia has had problems finding buyers for Iranian oil. Concerned about the US sanctions, potential clients refused to purchase it. On the other hand, Iran’s main hopes for sanctions relief are more connected to the EU than Russia. There is a strong belief in Tehran that Europeans will be able to offset the negative influence of US economic pressure on Iran. The EU wants to salvage as much of the nuclear deal as possible. Yet the strength of Tehran's belief is hard to explain: Large EU companies have already pulled out of Iran. The EU officials Al-Monitor interviewed openly said that Tehran should not expect a lot from Brussels.

Though Russian and Iranian officials have an on-again, off-again marriage of convenience, Iran's general public and its elite strongly oppose any substantial deals with Moscow. Russia is not trusted or welcomed by Iranians and the countries have a long history of differences. A well-informed and respected Iranian expert on Tehran’s foreign policy told Al-Monitor on condition of anonymity that a Russian oil-for-products initiative would be difficult to implement.

"A large part of Iranian society believes that giving our oil to Russia — especially at the discounted prices — is no better than agreeing to Trump’s demands,” he said.

To allay these concerns, Iranian officials periodically argue that there are no plans to export Iran’s oil with the help of the Kremlin.

Moscow seems to react to these statements with a wait-and-see approach. It is not in a hurry. The Kremlin recently sent a clear signal to Tehran that it is giving Iranian authorities time to persuade their public and critics among the Iranian elite that a deal with Moscow is in Iran's best interests. Should they succeed, Moscow is ready to resume the oil-for-products deal in early 2019.