A pro-state think tank accused foreign news services of “bias,” raising fears of a renewed wave of media repression in the country. 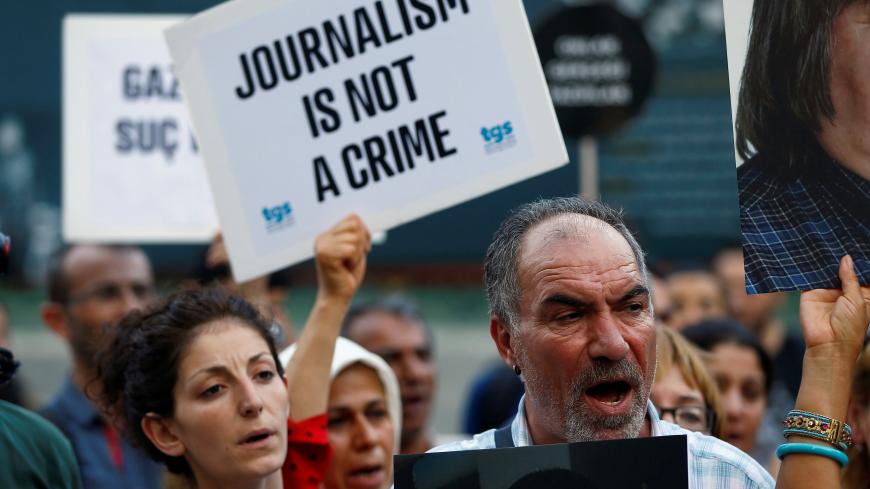 Demonstrators shout slogans during a protest against the arrest of three prominent activists for press freedom, in central Istanbul, Turkey, June 21, 2016. -

Since a failed coup in 2016, critical journalism and press freedom have been severely curtailed in Turkey, and foreign media operating in the country have once again come under increased scrutiny.

Titled “The extensions of international media outlets in Turkey,” the report accuses numerous media organizations and journalists of exhibiting “bias” against the Turkish state, sparking outrage among free speech advocates who say its contents could be used as evidence to indict individuals named in the document.

In response, the Journalists’ Union of Turkey and the Media and Law Studies Association said they would file a criminal complaint against SETA for “blacklisting” journalists and alleging foreign media was conducting propaganda operations in an effort to change “perceptions” among Turkish audiences.

The report looks like a “form of intimidation and an attempt to discredit the growing effect of international media coverage,” Erol Onderoglu, the Turkey representative for Reporters Without Borders, told Al-Monitor.

The SETA report arrives as more than 95% of Turkish media is run by government-friendly entities and many oppositional voices have been silenced with judicial proceedings targeting independent media outlets. According to Platform24, a press freedom monitor, at least 140 journalists are currently behind bars and more than 190 media outlets have been shuttered since the failed coup attempt.

“Through this so-called research, the Turkish administration demonstrates its ongoing allergy toward recalcitrant media outlets that maintain a critical attitude by questioning Erdogan’s presidential regime, precisely when the pro-government media circle has failed to fulfill its role in convincing people to ‘close their eyes’ to the many political, financial and social wrongdoings,” said Onderoglu, whose organization ranks Turkey 157 of 181 countries in its World Press Freedom Index.

The media organizations analyzed in the report include Al-Monitor, BBC Turkce, Deutsche Welle Turkce, China Radio International Turkey, Euronews Turkey, the Independent Turkey, Sputnik Turkey and Voice of America, while a host of domestic media outlets are cited as oppositional or anti-state.

Reviewing years of social media posts and articles, the report’s authors — Ismail Caglar, Kevser Hulya Akdemir and Seca Toker — conclude some organizations and individuals are impartial in their coverage of the 2013 Gezi protests, the 2016 failed coup, government megaprojects and ongoing military operations against Kurdish militants in southeast Turkey, Iraq and Syria.

For example, the BBC Turkish service is criticized for focusing too heavily on human rights infringements in post-coup purges and disregarding serious threats posed to state security in the aftermath of the failed putsch. Similar allegations are posed toward freelance journalist Mahmut Bozarslan, who covered round-the-clock curfews during heavy fighting in the nation’s southeast in 2015 and 2016.

According to SETA, Bozarslan used “manipulative language” in his coverage of armed clashes — implying he misrepresented the terror threat posed by Kurdish militants against the state — by focusing on human rights issues afflicting civilians caught in the crossfire. He is also cited for sharing news from opposition news outlets.

“I’m mostly accused of exhibiting a dissident attitude toward the government,” Bozarslan told Al-Monitor. “I use the word ‘accused’ because it’s more like an indictment than a report. … If you look at the language, the content and the method, it’s very much like a legal proceeding.”

Bozarslan said he planned to file a criminal complaint against the SETA report, “not because something will come out of it, but just to make a public record of the incident.” He also mentioned one of his friends was listed in the report for retweeting one of his tweets.

“I believe having my name in this report is a badge of honor,” Bozarslan said. “I’m in that report because I did my job. If I’m going to be targeted for doing my job, then there’s nothing to be ashamed of on my behalf. This report is a black stain in history.”

At the time of publishing, AKP officials have made neither positive nor negative comments regarding the SETA report, and future developments largely depend on how the state leaders use the report’s allegations. SETA representatives did not respond to multiple requests for comment for this article, but the think tank published a response to criticism, justifying the research by saying it was based on open-source information available to the public.

In a Twitter post, lead author Ismail Caglar wrote, “Looking at some issues naively may be some people's choice. But it's our duty to offer insight into Turkey's foreign media as a think tank of Turkey.”

The criticism of foreign media in Turkey is not new and comes as the number of credible information sources has declined sharply in recent years due to corporate consolidation and ongoing censorship efforts. Wikipedia has been banned in Turkey for more than two years, and a recent Economist article found the subversive Russian news outlet Sputnik to be enjoying unusual popularity in the country, mostly due to the lack of alternative news sources.

Earlier this year, Deutsche Welle, VOA, France24 and the BBC jointly released a YouTube news channel called +90 in attempt to fill Turkey’s information vacuum. Yet such efforts can only amount to cosmetic bandages if state officials routinely violate free speech protocols under the European Convention on Human Rights, to which Turkey is a signatory, Eren Keskin, a prominent lawyer, activist and co-chair of the Human Rights Association, told Al-Monitor.

“Turkey continuously violates Article 9 and Article 10 of this convention, which regulate freedom of expression,” Keskin said. “The [European Court of Human Rights] has convicted Turkey so many times for violating these two articles, and I believe the European Union has a part in what Turkey has become because it doesn’t impose sufficient sanctions against Turkey to stop these practices.”

According to Keskin, laws that outlaw criticism of state officials too often stifle freedom of speech in Turkey. In 2017, more than 6,000 people were prosecuted and about 2,100 were convicted for the charge of “insulting the president.” Keskin said state officials will continue to use such laws against critical journalists, and the SETA report could be a precursor for a new wave of repression against media outlets operating in Turkey.

“I find SETA’s report, which targets dissident journalists, to be very militaristic and fascist,” Keskin told Al-Monitor. He added, “The reaction [toward it] is huge because it’s targeting journalism as a profession.”