The death of critical journalism in Turkey

Press freedom in Turkey is often assessed on the basis of jailed journalists, but this fails to fully reflect the gravity of the situation if one omits the huge number of journalists who have lost their jobs and are facing an uncertain future and struggling to survive. 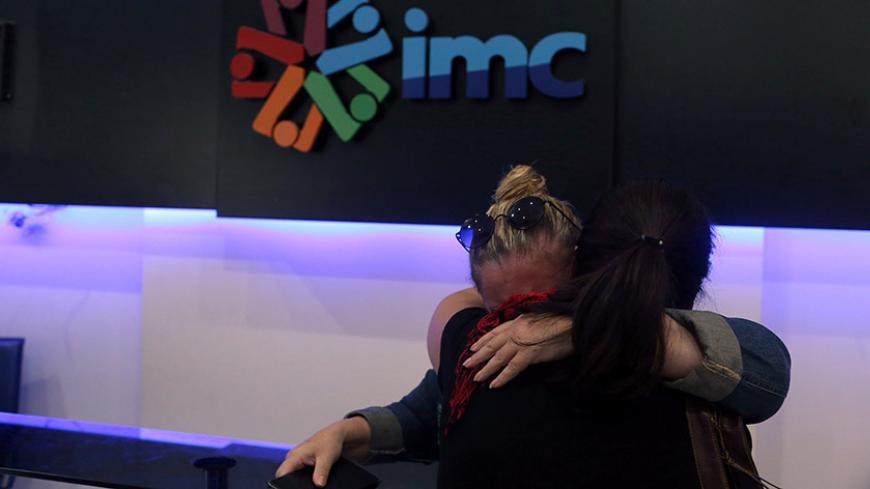 IMC TV employees react after their broadcaster's transmission was cut by the authorities under a government decree, at IMC TV studios in Istanbul, Turkey, Oct. 4, 2016. - REUTERS/Huseyin Aldemir

A prominent Turkish journalist who migrated to Europe a few months ago and is convinced she can no longer practice her profession in Turkey has noticed something intriguing in her son, a primary schooler. “He keeps drawing prisons,” the journalist told Al-Monitor. “I was worried about his future in Turkey, but it turns out he, too, was secretly worried about me.” The journalist, who requested anonymity, shared the drawings with Al-Monitor on condition they not be published. In all of them, big prisons reminiscent of a panopticon are depicted in striking detail, including tiny cells with bars, “control points” and other compounds marked as armories, offices and visitor’s rooms.

In the 2016 World Press Freedom Index by Reporters Without Borders, Turkey ranks 151st out of 180 countries. As of Oct. 12, 92 journalists were behind bars, according a widely referenced tally by Necati Abay, an activist who closely follows and documents the imprisonment cases.

According to the Turkish Journalists’ Syndicate, the number of jobless journalists has climbed to about 10,000 with the massive purges in the media that followed the July 15 coup attempt. Syndicate chairman Gokhan Durmus told Al-Monitor that some 7,000 journalists were out of work in 2015, according to the Turkish Statistical Institute. “This figure has grown dramatically this year. The number of working journalists has now fallen from 40,000 to 30,000,” he said.

The government has left no room for critical journalism, Durmus said, stressing that alternative media platforms, which used to offer employment opportunities for the jobless, have been largely suppressed as well. Most recently, the government last month ordered the closure of 12 television channels and 11 radio stations, adding hundreds to the army of the jobless. Durmus noted that only about 4,500 of the 30,000 journalists who remain employed were unionized.

Ahmet Sik, the winner of UNESCO’s 2014 press freedom prize but still a jobless man at home, said a small number of his jobless colleagues managed to move to the public relations sector or the internet media, while some borrowed money to start up cafes or taverns. The vast majority, however, had to move back to their parents’ homes, unable to support independent households, he told Al-Monitor. “No journalist the government dislikes can find a job at present. The three surviving [critical] newspapers — Evrensel, BirGun and Cumhuriyet — are grappling with financial problems, meaning they cannot recruit new journalists,” he said. “For those who lose jobs, the prospect of working somewhere else is totally nonexistent, as almost all critical media outlets have been closed. [The government is] seeking to discipline journalists by starving them.”

Erol Onderoglu, the Turkish representative of Reporters Without Borders, says economic links between the government and media bosses have been critical in the process. Wary to protect their interests in other business sectors, media bosses toed the line and reshaped their staffs accordingly, Onderoglu told Al-Monitor. In the process, he said, prominent TV journalists and household names such as Aysenur Arslan, Banu Guven and Mirgun Cabas disappeared from the screens of major channels, and then tried to soldier on in smaller media outlets.

Their plight, however, did not end there. Guven, for instance, has found herself jobless again. IMC TV, where she was an anchorwoman, fell victim to the latest clampdown, along with 11 other TV stations, with the government using extraordinary powers under a state of emergency declared after the attempted coup.

Guven was a hugely popular personality on the leading NTV news channel when she was fired in 2011 due to what she sees as her former employer’s business interests with the government. Before joining IMC TV in 2014, she went on reporting on her personal website, but this proved economically unsustainable. Guven told Al-Monitor how the government’s drive to redesign the media escalated over the years. “At one point while still at NTV, we began to receive lists of people who could or could not appear on our programs. And when the bosses submitted fully to the government, they began firing journalists like me,” she said. “But even then, I still believed we had space to maneuver, I had hope. Today, we’ve come to a point where any independent initiative is blocked. Any broadcast outside the government’s criteria has become impossible, and no journalist can make a living outside those criteria.”

Faruk Balikci, who used to report for IMC TV from Diyarbakir in the mainly Kurdish southeast, is not that pessimistic. This gloomy period, he believes, will one day come to an end and critical journalism will return. Like Guven, Balikci had joined IMC TV after being fired from one of Turkey’s biggest media outlets, the Hurriyet newspaper, last year.

Balikci went through the lengthy states of emergency in the southeast in the 1990s, when the Kurdish conflict peaked and the state used heavy-handed measures to suppress dissent. Asked to compare those days and the current emergency rule, Balikci said, “In the 1990s, many colleagues of mine were killed. Halit Gungen, Hafiz Akdemir and Huseyin Deniz are only a few examples. Yet the pressure on journalists was never as arbitrary and unlawful as it is today. Never were so many newspapers and TV channels closed, never were so many journalists arrested. True, there were arbitrary obstructions, but we went on doing journalism, one way or another. Today, it’s totally blocked. But this period will pass because it’s not something sustainable.”

A serious setback for the jobless journalists is the lack of a platform to unite and discuss joint action, a result of the very low unionization level in Turkey’s media sector. Durmus lamented that this stood in the way of professional solidarity as well. “In 2014, for instance, 300 people were fired from a TV station, but we managed to contact only 50 of them,” he said, adding that many TV stations transferred staff to subcontractor companies to prevent unionization and evade compliance with related laws.

Onderoglu added that Turkish journalists have long had a tendency for individualist careerism, placing little importance on organized and collective action. “When journalists fail to develop internal professional dialogue in normal times, it’s beyond imagination that they can do so in times of emergency rule when pressure becomes the trend,” he said.

Onderoglu spent 10 days behind bars in June for participating in a solidarity campaign for a banned pro-Kurdish daily. These days, he is penning his quarterly “Media Monitoring Report” for the Independent Communication Network, an activist news site. “I’ve been doing this for 16 years,” he said, “but for the first time I’m preparing a report describing how an independent media domain has been eradicated.”

As for the journalist who moved to Europe, she has yet to be jailed or prosecuted. Yet her son keeps drawing prisons. She says she is surprised, but the drawings perhaps indicate that even primary schoolers can now easily portray the state of press freedom in Turkey.