Will Netanyahu's Putin connection backfire in his hunt for votes? 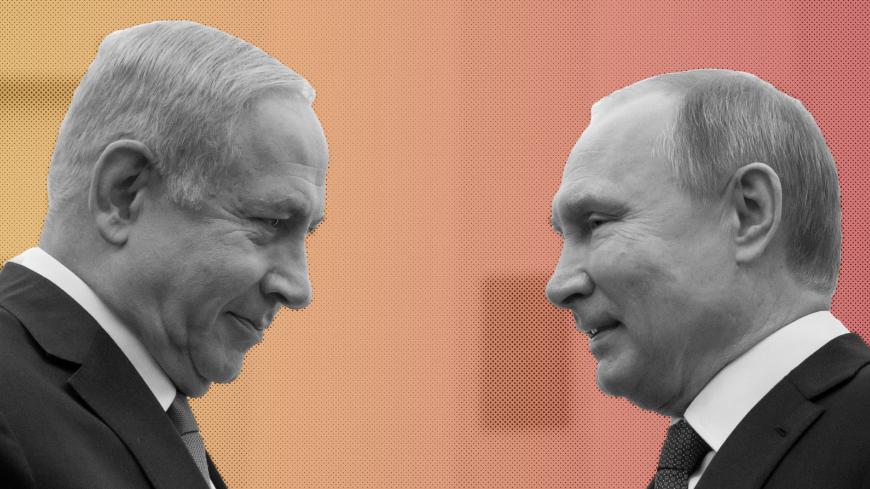 Russian President Vladimir Putin and Israeli Prime Minister Benjamin Netanyahu greet each other during a meeting at the Kremlin, Moscow, April 4, 2019. - Alexander Zemlianichenko/Pool via REUTERS

On July 28, Tel Aviv residents were surprised to find a huge poster of Prime Minister Benjamin Netanyahu and Russian President Vladimir Putin smiling at each other on the outer wall of Metzudat Zeev, Likud's headquarters in the city. “Netanyahu, a different league,” the poster read. Similar posters showing Netanyahu with US President Donald Trump and Indian Prime Minister Narendra Modi have also been displayed. These images, distributed via social networks and WhatsApp as well, are part of the Likud’s new campaign, which also includes footage from Netanyahu’s meetings with the three leaders.

As fate would have it, a day before the campaign launched, Russian authorities arrested more than 900 people in Moscow during an opposition protest that the police violently dispersed. The juxtaposition of events generated a lively debate in the media and via social networks in Hebrew and Russian, where many noted the anomaly in the height of Netanyahu and Putin as depicted on the poster: Putin, at a height of 170 centimeters (close to 5 feet 7 inches), looks a little taller than Netanyahu, who is 184 centimeters tall (6 feet tall). Other commenters remarked that they have no problem with contacts between Israel and Putin-led Russia, but what does bother them is using the image of a leader of an undemocratic nation in an election campaign.

“It was strange for me to see this photo [of Netanyahu and Putin], when a moment ago I saw my friends getting clobbered on the streets of Moscow,” Roman Goldshteyn, who immigrated to Israel from Moscow three and a half years ago, told Al-Monitor. Goldshteyn, who participated in opposition protests while living in the Russian capital, called on his friends to come to Likud headquarters to join a protest under the banner “Israel Without Putin.”

“I see how Netanyahu and his coalition are trying to change the nature of the government so that he can continue serving as prime minister,” Goldshteyn told Detaly, a Russian-language news website, on July 29. “In my opinion, we, Russian speakers who emigrated from there recently, especially know how dangerous this is for all Israelis, regardless of their political outlook. Our role is to show this to them.”

Immigrants who started the Facebook group “Enough Is Enough” have questioned the judgment of Likud officials’ in putting Putin out front. “I don’t know who among their advisers on the Russian sector told him to do this,… but that adviser is an idiot,” wrote Constantine Pres, a Russian immigrant, in a post to the group.

Oleg Ulyansky, a veteran campaigner and strategic adviser who splits his time between Russia and Israel, believes that whoever was behind the campaign got it right about Netanyahu’s base, but is wrong about immigrants from the former Soviet Union.

“From the standpoint of Netanyahu’s base, Putin is a strong and tough leader who achieved significant success on terrorism,” Ulyansky told Al-Monitor. “We must remember that the Likud’s goal is not only to siphon votes from [Yisrael Beitenu leader Avigdor] Liberman but also from the United Right, headed by Ayelet Shaked. It could be that this campaign might actually achieve this goal, but among Russian speakers, this campaign has more detractors than supporters. To conclude, Liberman’s campaign staff is very happy today. They say they can let the Likud do their work for them.”

Former Knesset member Roman Bronfman told Al-Monitor that while some older immigrants get their news from Russian TV channels that tend to support Putin, Netanyahu's campaign is doing their candidate a disservice.

“You have to understand that most immigrants didn’t come from Russia but from the other republics of the former Soviet Union — Ukraine, Belarus, Moldova, Georgia, Azerbaijan and others,” Bronfman explained. “They are about two-thirds, compared to a third [from Russia].… Those who came from Russia proper are a minority. There’s also immigration in recent years to Israel from Putin’s Russia and [those waves do] not tend to support him. If someone in the Likud thought that this move would cause Russian speakers in Israel to change their votes and to support the Likud because of Netanyahu’s ties to Putin, he is very mistaken.”

According to Eli Hazan, Likud’s director of foreign relations, even if the “Different League” campaign isn’t perfect, it’s still effective because, among other things, it has caused quite a stir.

“First of all, it’s the truth. Netanyahu is in a different league,” Hazan said to Al-Monitor. “His leadership is proven, and that’s the campaign’s goal. If he weren’t prime minister, then this positive diplomatic tsunami in India, Africa, Australia and other places wouldn’t have happened. It may be that there are negative impressions, but among the general public, this narrative suits us well. It’s hard for me to believe that Roman from Petah Tikva [for instance] would get to the ballot box and say, ‘I won’t vote for Netanyahu because he has a photo with Putin.’ Overall this campaign suits what we are looking for.”

It was reported on July 29 that the Prime Minister’s Office is trying to get Putin to Israel for a visit. At a meeting between Netanyahu and Putin in February 2019, the Israeli prime minister had invited the Russian president to Israel for the dedication of a memorial to the victims of the siege of Leningrad (1941–44). The Jerusalem municipality has hastened the process of finishing the memorial so it can soon be unveiled.

As the heat of July and August bears down along with the Sept. 17 election, political campaigning is also heating up. In contrast to the election in April, it appears that the Likud has come to recognize the importance of the “Russian vote.” To start, Netanyahu appointed the attorney and Russian immigrant Ariel Bolstein as a special adviser on Russian affairs, and then he met with a group of political activists who had left Yisrael Beitenu to join the Likud. On July 29, under pressure from Finance Minister Moshe Kahlon and Netanyahu, Knesset member Roy Folkman resigned from the Likud's candidate list to make room for Tali Ploskov, a former Knesset member born in Moldova.

Also on July 29, Netanyahu ventured to Ben-Gurion International Airport to greet immigrants arriving from Ukraine, and on July 25 he visited Channel 9, which primarily broadcasts in Russian, for a rare interview with Anna Reiba-Barsky and Dmitry Dubov. He mentioned his close ties to Putin at the beginning of the interview. Netanyahu remarked, “I speak with my friend Putin in the most direct way: We have to stop Iran now. I am not afraid to be the most prominent voice in the world on this.”

In the meantime, it appears that Netanyahu's efforts so far have not borne the desired fruit. Most polls show Yisrael Beitenu growing in strength. The battle for the Russian vote is only beginning, Likud campaign staffers and advisers like to note, which means that more surprises are to come, with or without Putin.