Prime Minister Benjamin Netanyahu has expended great efforts to hurt Yisreal Beiteinu leader Avigdor Liberman in a battle for his Russian voters, but Liberman continues to make gains in the polls. 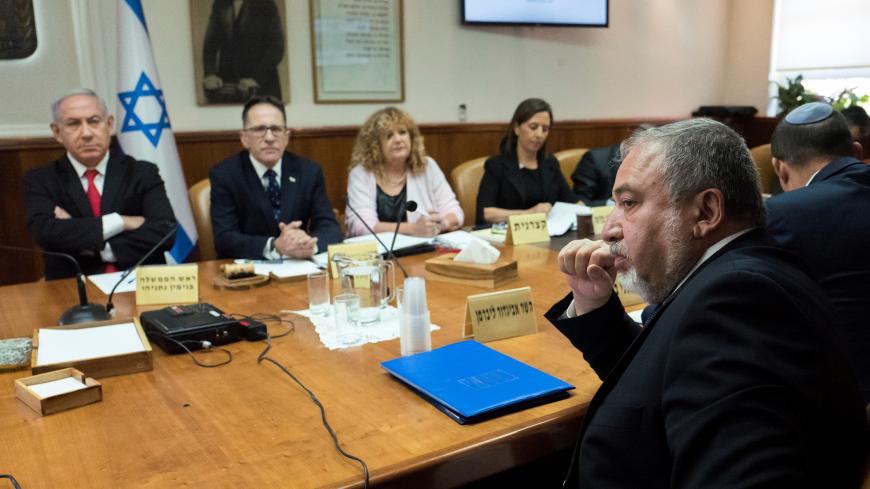 At the end of three weeks of focused battle for Avigdor Liberman's Russian voters, Prime Minister Benjamin Netanyahu has failed. Not only has the chairman of Yisrael Beiteinu retained his traditional voters in the Russian sector, but he has continued to grow in polls, taking in mandates from the right and left, from the Blue and White Party and Kulanu. Netanyahu has still not managed to crack Liberman, who has reinvented himself as a champion against religious coercion and has attracted large audiences.

A poll published July 16 on Channel 12 predicts that Liberman will win 10 mandates — twice his strength in April’s election. The Likud, which has incorporated Kulanu, would win only 31 seats, and the right-wing and ultra-Orthodox bloc without Liberman would win only 55, meaning that Netanyahu won’t be able to form a government. According to the poll, Blue and White, with 30 mandates, won’t be able to form one among the left either.

Since he prevented a government of the right and the ultra-Orthodox, leading to a new election, Liberman has become the hope of the center-left bloc and Netanyahu’s biggest problem. In recent campaigns the center-left parties failed to attract mandates from the soft right — the Likud. The right’s electorate remained stable. But here, Liberman has upended the game. In contrast to the April election, now he does not commit to recommending Netanyahu to form a government, even though most of his mandates are identified with the right. Moreover, he doesn’t reject the possibility that he would recommend the chairman of Blue and White, Benny Gantz, to form the government. For the first time in years, some mandates from the right could move to the other bloc. This is the biggest drama right now in the election campaign.

Netanyahu's internal polls are similar to those on television and thus he has increased his attacks on Liberman. On July 15, Netanyahu met with Likud ministers and Knesset members for a campaign meeting that was meant to tighten the ranks and sharpen messages. The conversation was mostly about Liberman. Netanyahu presented a goal of 61 mandates, a majority coalition, for the right-ultra-Orthodox bloc without Liberman.

Netanyahu’s main rival in the race for prime minister seems to be Gantz, but right now Netanyahu is more concerned with Liberman, who led him to a dead end after his victory in April and could do it again. Liberman in Netanyahu’s waking nightmare. Our goal, Netanyahu told Likud leaders, is to damage Liberman on the Russian street, to not only limit his strength but work toward not needing him to form a majority coalition.

Before his meeting with party members Netanyahu hosted 25 activists who left Yisrael Beiteinu and joined the Likud. With the Likud's Ze’ev Elkin, who immigrated from the former Soviet Union, at his side, Netanyahu went out of his way to charm them. He told them that when he was first elected prime minister in 1996, he named Liberman his chief of staff because he wanted to advance Russian immigration — an anecdote meant to remind them who is the more senior politician. In an edited video distributed to the media after the meeting, Netanyahu is seen excoriating Liberman and explaining to his former supporters that he made a big mistake in letting Liberman handle the problems of the Russian sector. “I regret it,” he told them most seriously, slickly ignoring the fact that he has been prime minister for a decade. “We gave Liberman responsibility for housing and pension and rent and all the rest of the issues. Liberman did nothing, that’s the truth.”

Netanyahu also told them of Liberman’s close ties with the ultra-Orthodox in order to prove his alleged hypocrisy, grasping his hands together to demonstrate how close these ties are.

Netanyahu recruited the former chairman of Yisrael Beiteinu’s parliamentary group, Robert Ilatov, as a campaign adviser and met with former Absorption Minister Sofa Landver, a respected figure among the Russian public who is considered close to Liberman.

As part of the blitz on Liberman’s strongholds, Netanyahu popped by Ashkelon last week and dedicated a public housing complex for immigrants. Ashkelon was not chosen at random. In the last election Liberman’s party got the second biggest share of the votes in the city after the Likud. Netanyahu promised, streaming live on Facebook, “I take personal responsibility for solving the public housing issue and pensions.”

Add to all this the large amounts of money the Likud is investing in advancing content on social media directed at Russian speakers. But despite all his efforts Netanyahu has not managed to hurt his former friend.

Liberman, for his part, is amused at the whole situation. “I really hope that the prime minister continues in this line, it really helps us,” he said in an interview with Walla on Tuesday morning. It seems Liberman knows what he’s talking about, since the results of the poll forecasting 10 mandates for him were published that evening.

Last week, Liberman mocked the prime minister’s conduct on national security and described him as weak. “Netanyahu is the best presenter in the world on the topic of the Iranian nuclear program,” Liberman posted on Facebook, “but on the practical level, he who can’t handle the threat from Gaza won’t be able to handle a threat from Iran.” At the same time, his Knesset members were sent to the media and directed unconventional fire at Netanyahu. “I want to say something about the house on Balfour Street,” said Yisreal Beiteinu Knesset member Eli Avidar in an interview without being asked. “I think that Sara Netanyahu has much more power than all of the prime ministers who served here in the last 10 years.” It was a blow below the belt. Between Netanyahu and Liberman, whose three-decade relationship started as a brave friendship, such statements are outside of bounds.

Outwardly the Likud projects confidence, but in internal conversations the concern about Liberman is real. According to one of the Likud’s ministers who spoke to Al-Monitor on condition of anonymity, “Liberman is unpredictable and he seeks to take revenge from Netanyahu, it’s clear. On the way, he’s taking us all hostage in this war, and in the meantime, we have no answers.”