Prime Minister Benjamin Netanyahu wants people to believe that normalization with the Arab world is possible through common opposition to Iran rather than resolution of the conflict with the Palestinians. 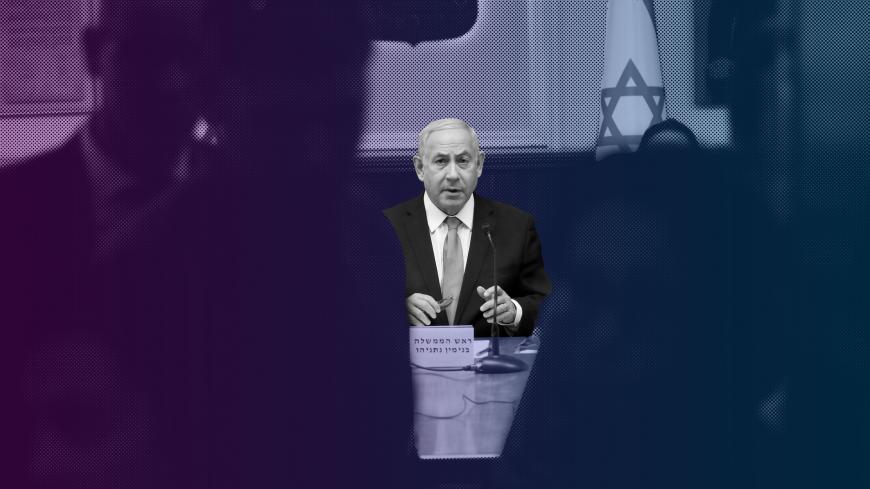 Prime Minister Benjamin Netanyahu opened the weekly Cabinet meeting on June 30 with a “very important statement” from an interview granted by Bahraini Foreign Minister Khaled Bin Ahmad Al Khalifa to Israel’s Channel 13 News. He quoted, “Israel is a country of the Middle East. Israel is part of the heritage of this whole region. The Jewish people have a place amongst us. The Israeli public needs to trust that there are countries in the region that do want to have peace and do encourage the Palestinians to do it.”

Netanyahu attributed the refreshing interview with the Bahraini minister to none other than “our policy, which is turning Israel into a rising regional and global power.” Israel, Netanyahu added, is “drawing closer to the Arab states, and gradually normalizing relations with them” and had “praised the Bahrain conference that was designed first and foremost to lead to economic prosperity for the Palestinians and the entire region.” The Palestinians, he said, “repeatedly attacked the conference in contradiction of their own interests,” while Israel “is continuing to advance ties with the Arab world, including today, and this serves everyone.”

As usually, Netanyahu selected the facts to suit his propaganda and ignored those that contradict it. In reading the statement of the Bahraini foreign minister, Netanyahu omitted some salient parts. “I am concerned about the Arab Peace Initiative, which calls for a two-state solution,” the Bahraini minister said. “We have not heard even a hint of a positive reaction to the Arab Peace Initiative on the part of the Israeli government. We have heard such things from various political elements in Israel, but the reaction of the government of Israel was full of reservations and distrust… I advise Netanyahu and the Palestinians not to miss the opportunity that exists today to achieve a peace agreement.”

This is not the first time Netanyahu has misled the public with a distorted representation of the mutual security interests Israel shares with the Gulf states, chief among them the conflict with Iran. He turns every public gesture — such as his 2018 visit to Oman, Israeli participation in a sports tournament in Doha and the invitation extended to Israeli journalists to attend the recent US-led economic workshop in Manama — into additional proof that he can supposedly advance ties with the Arab world, develop the settlement enterprise and neutralize the Palestinians, all at the same time. The political center and left-wing opposition applaud Netanyahu as though he were the one who achieved the breakthrough with the Arab world and did so without paying a price in the Palestinian arena.

The opposition Blue and White has so far not determined its position on the 2002 Arab Peace Initiative. The Labor Party is mired in infighting over the crumbs voters left it (only 6 Knesset seats) in the April elections; it does not have time to remind the public that two Labor prime ministers, Yitzhak Rabin and Shimon Peres, visited Oman in the 1990s. The 1993 Oslo Accord, which both of them signed with the Palestinians, despite strenuous opposition at the time by Netanyahu and his friends, led to the opening of official Israeli missions in Qatar, Oman and Morocco. All were shut down following violent Israeli-Palestinian clashes and a freeze of the peace process. Not only that, senior Arab representatives sat alongside senior Israeli officials at the Madrid peace conference in 1991 and at the Annapolis summit a decade later, well before Netanyahu assumed office.

Netanyahu would have people believe that normalization with the Arab world can be based on the mutual struggle against Iran and has nothing to do with the Israeli-Palestinian conflict. In a 2017 policy paper, Phil Gordon, who served as White House coordinator for the Middle East under President Barack Obama, asserted, “The vision of Israel normalizing its relations with Arab states without the agreement of the Palestinians is fanciful.” Gordon added, “Even modest steps toward normalization will require Israel to do much more than many Israelis seem to realize. Ultimately, the road to normalization with the Arab states still runs through the Palestinian issue, and not the other way around.”

When President Bill Clinton suggested to Prime Minister Ehud Barak in 2000 that the leaders of Saudi Arabia and the Gulf states be invited to the signing of a peace agreement with Syria, which ultimately failed to materialize, Barak answered in his usual blunt manner: “I don’t need 20 jalabiyas,” meaning he didn't need 20 Arab leaders around him. Indeed, the importance of Israeli ties with the Gulf states notwithstanding, Israel’s paramount strategic interest lies in ending the conflict with the Palestinians, a conflict that has been corrupting Israel for more than a half century and undermining its security. Hopefully, the road to peace with Syria and Lebanon will reopen one day soon. Normalization with the Gulf states is only the icing on the cake. The main course is launching negotiations based on the Arab Peace Initiative.

In July 2009 in the Washington Post, Bahraini leader Sheikh Salman bin Hamad Al Khalifa wrote, “Essentially, we have not done a good enough job demonstrating to Israelis how our initiative [the 2002 Arab Peace Initiative] can form part of a peace between equals in a troubled land holy to three great faiths.” The Arab neighbors might have been able to do a better job of marketing their “lands for peace” plan, but over the past 10 years, the Netanyahu decade, there were no buyers for such goods (not that the initiative was put on the Cabinet’s table for discussion in the seven years preceding Netanyahu's regime).

The Israeli media's generous, favorable coverage of the Bahrain conference paves the way for adding the issue of peace to the political agenda ahead of the Sept. 17 elections. Netanyahu will now find it hard to tar as “leftists” — a word he's made synonymous with “traitors” — the entire camp of Israelis who support the establishment of a Palestinian state along the 1967 borders. After all, Netanyahu’s new Arab BFFs, whose praises he keeps singing, are demanding the exact same thing.