Rather than basing its global standing on the principles of equality and justice, Israel exports cyber weaponry to tyrannical, racist rulers. 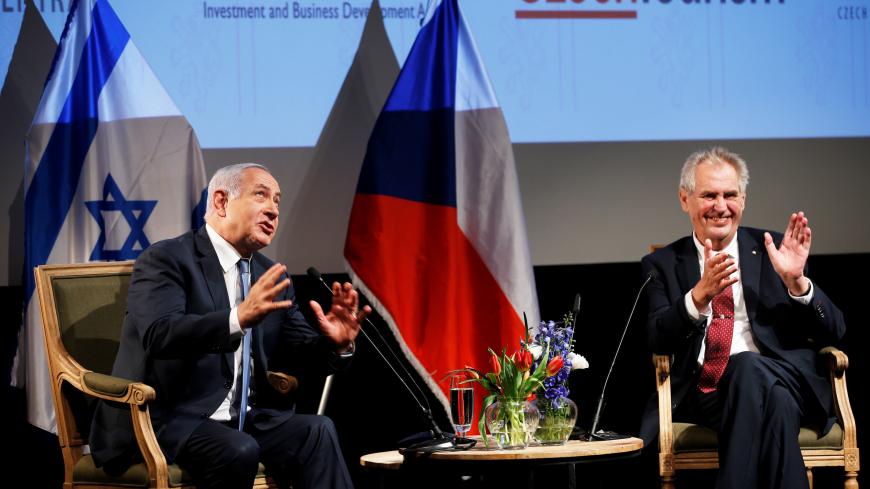 “This visit reflects the rising status of Israel among the nations,” Prime Minister Benjamin Netanyahu announced festively as he informed his Cabinet on Nov. 25 of the “historic visit” that Chad’s President Idriss Deby was about to begin in Israel. The following day, Netanyahu hosted Czech President Milos Zeman, who joked that — not being a dictator — he could not commit to moving his country’s embassy from Tel Aviv to Jerusalem, as Israel hopes, but he will do his best.

This week we were also informed of a behind-the-scenes diplomatic romance between Netanyahu and Sudan’s ruler, Omar al-Bashir, for whom there is an outstanding international arrest warrant for crimes against humanity and war crimes. The publications about contacts between Jerusalem and Khartoum suggest that the time has come for this African dictator to acknowledge these ties. In other words, he is requested to pay Israel with diplomatic currency for the public relations campaign it has waged on Sudan’s behalf in Washington. And so, while Israel offers to Sudan (shady) diplomatic services, it also offers other (weapons) services to other regimes. It was no coincidence that Deby said in Jerusalem, “We have a shared struggle … against the sickening evil of this century, which is terrorism.”

An Oct. 19 investigative expose in Haaretz, said to be based on some 100 sources in 15 states, revealed that one of the symptoms of the scourge to which Deby referred is the use made by despots around the world of Israeli-made spyware to monitor their political rivals and human rights activists. In other, more genteel words, those that Netanyahu himself used this week: “Every week we see the implementation of our concept, of cultivating economic-technological strength alongside security-intelligence strength to receive political-diplomatic strength.”

Netanyahu’s conception is that exporting arms and cyber weaponry to dictators, plus waging public relations campaigns on their behalf, equals highly publicized visits plus public relations for Netanyahu. According to Netanyahu’s method, in exchange for Israeli military technology, he can get excellent media exposure. In his equation, there is no room for Israel’s occupation of the West Bank and its settlements there, nor for the diplomatic freeze with the Palestinians. The victorious trumpeting heralding Netanyahu’s recent visit to Oman, his July 2017 visit to Budapest, and his enthusiastic reception of the leaders of Chad and the Czech Republic in Jerusalem illustrate Netanyahu’s unique abilities. He is the only one who can accomplish all the following feats at the same time: Cultivate the settlement enterprise and perpetuate half a century of Israeli occupation, destroy the diplomatic process, cultivate Israel’s ties with Europe and breach the boycott of the Arab-Muslim world.

This is not the first time, nor obviously the last, that Netanyahu has counted on the public’s short memory span. He himself, as a young deputy foreign minister, was a member of Israel’s delegation to the peace conference convened in Madrid in October 1991, with the participation of a dozen Arab states. In a speech delivered two years later, the head of the US peace team, Dennis Ross, said that the Madrid conference was where “the contact and rich and varied tapestry of relations between Israel and the Arab states was born” (quote taken from “The Road to Peace Crosses Madrid” by former Foreign Ministry director Eytan Ben-Tsur). The international event also opened the gates of two superpowers — Russia and China — for Israel and paved the way for full diplomatic ties with India and South Korea.

Netanyahu is relying on the fact that very few people know about the Euro-Mediterranean Partnership, also known as the Barcelona Process, which marked its 23rd anniversary on Nov. 27-28. Ehud Barak, then foreign minister in the government of Shimon Peres, signed the initiative, which was the basis of Israel’s first-ever free trade agreement. The agreement, which resulted in the gradual elimination of all tariffs on industrial goods traded between Israel and the European Union, was one of the sweet fruits of the 1993 Oslo Accord between Israel and the Palestinians.

In addition to Israel, other members of the Barcelona Process were Algeria, Tunisia, Turkey, Jordan, Lebanon, Malta, Egypt, Morocco, Syria, Cypress and the Palestinian Authority, with Libya as an observer. The vision of the initiative’s authors was to turn the Mediterranean region into an area of peace by strengthening stability and encouraging regional economic development. The 1995 association agreement between Israel and Europe is still in force, despite the fact that Israel’s right-wing governments have focused mostly on encouraging the economic development of the Jewish settlements across the Green Line.

Evidently, the European Union would not have signed such an agreement had a Netanyahu government ruled Israel at the time — a government that persecutes human rights organizations that receive EU funding. Were it not for the 1993 Oslo Accord, whose architects were targeted by violent incitement instigated by Netanyahu, among others, Jordan would not have signed in 1994 a peace treaty with Israel or opened an embassy in Ramat Gan. It stands to reason that had Netanyahu been in power at the time, along with his hard-line Cabinet ministers Naftali Bennett and Ayelet Shaked, Israel would not have been able to open diplomatic missions in the Persian Gulf states, and Saudi Arabia and Bahrain would not have withdrawn from the Arab Boycott agreement in 2004 and 2005.

Netanyahu relies on the fact that only a handful of Israelis remember the Annapolis Conference held 11 years ago this week on Nov. 27, 2007. In addition to senior Western figures, Egypt and Jordan accepted President George W. Bush’s invitation and stood alongside then-Prime Minister Ehud Olmert and Palestinian President Mahmoud Abbas. Also attending the event were officials from the United Arab Emirates, Bahrain, Oman, Saudi Arabia, Qatar, Yemen, Iraq, Pakistan, Mauritania, Indonesia, Malaysia, Algeria, Tunisia and Senegal. In the Annapolis Declaration, Israel and the Palestinians pledged to further “the goal of two states, Israel and Palestine, living side by side in peace and security,” and to launch immediate, “vigorous” negotiations in order to reach a permanent agreement within a year.

Meanwhile, Olmert went to jail for corruption, vacating his seat for Netanyahu. The winds of peace blowing from Oslo and Annapolis made way for the evil winds of terror and siege, occupation and expulsion. Rather than basing its international standing on the principles of justice and equality, Israel is buying friends with its weapons and diplomatic seals of approval. Instead of the 2002 Arab Peace Initiative that for the past 16 years has held out the prospect of normal relations between Israel, the Arab states and most of the Muslim world, Israel is smacking its lips over the crumbs it gathers from the tables of despotic rulers and racist leaders.