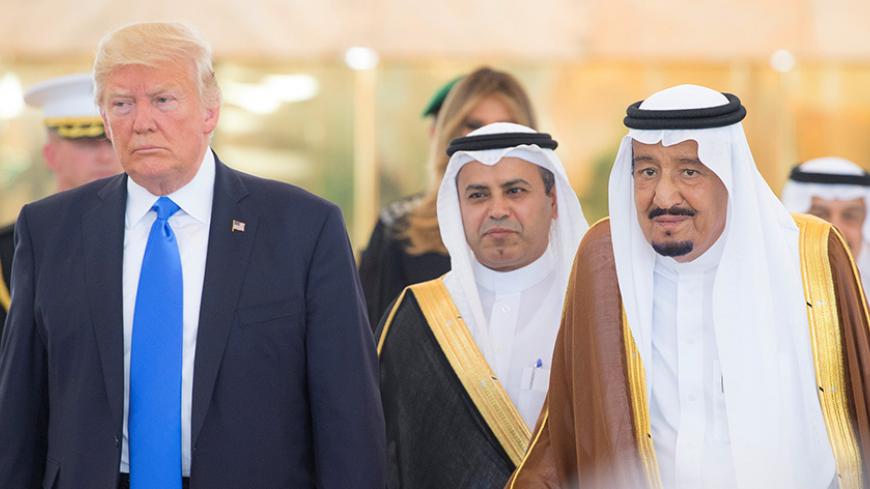 Israelis were divided into three camps this week. One camp consisted of those in government who wanted US President Donald Trump’s visit to go off smoothly without jarring the bad old Israeli-Palestinian status quo. To smooth the way, they provided Trump with a few incentives, such as easing the passage of Palestinians from Jordan into Israel via the Allenby Bridge at all times and approving Palestinian building permit requests in the Israeli-controlled West Bank Area C, which were rejected in the past for no good reason. The second camp, which included the vestiges of the Israeli left wing, hoped Trump would succeed in launching a regional peace initiative to end 50 years of Israeli occupation. The third, which encompassed most citizens of Israel, did not believe that Trump would succeed where President Barack Obama and his predecessors failed — Ronald Reagan, George H.W. Bush, Bill Clinton and George W. Bush.

What these three groups have in common is the prevailing belief that the key to ending the conflict lies in Trump’s pocket. But can one really expect Israelis and Palestinians to put their faith in a leader who does not even enjoy the trust of the majority of his fellow countrymen? Of what value is an agreement signed by a president under various investigations who is being kept at arm’s length even by top leaders of his own party? If American presidents who were at the top of their game were unable to stop Israel’s creeping annexation of Palestinian territory by building more and more settlements, how will a lame duck president manage to do so before he has even learned to walk?

To revive the moribund Israeli-Palestinian peace process, Trump will have to convince Israeli Prime Minister Benjamin Netanyahu to renew negotiations from the point at which they derailed in the waning days of Prime Minister Ehud Olmert’s term in 2008. Top Palestinian officials have made it clear that under no circumstances will they agree to start negotiations from scratch. They have “been there, done that” during the 2013-14 negotiations, when Netanyahu sent his trusted attorney Yitzhak Molcho to baby-sit then-Justice Minister Tzipi Livni and make sure she didn’t present the Palestinians with even an iota of a permanent agreement map. What are the chances that Netanyahu will now present the Palestinians with Olmert’s proposed map, which gives the Palestinians 92% of the West Bank and part of Jerusalem?

As former US Secretary of State Henry Kissinger used to say, Israel doesn’t have a foreign policy, only a domestic political one. On May 22, TV presenter Geula Even-Saar essentially mapped out the government’s constraints in a biting question she put to Netanyahu’s Public Security Minister Gilad Erdan. Is Israel making these goodwill gestures to the Palestinians as a reward for their incitement? she challenged.

Netanyahu probably remembers the cynical taunts leveled at Prime Minister Ariel Sharon following his 2005 Gaza disengagement plan, and later also against Prime Minister Ehud Olmert, by which “the withdrawal [from Palestinian territory] is only as deep as the investigations [over suspected corruption].” Sharon and Olmert were each under police investigations for corruption. Now, there are those leveling the same accusations against Netanyahu, who is also under police investigation.

The road to peace in the Middle East does, indeed, pass through Washington, but all the real breakthroughs ever achieved in this process occurred here in the region. Had he bothered to learn from his predecessors’ experience, Trump would have understood that an American president may be able to bring the sides to the table, if he is lucky, but they will only eat what is on it if they are dying of hunger. He would have realized that the hunger for peace only comes after the thirst for blood is quenched. That was the case with the 1973 Yom Kippur War, and the first intifada in the late 1980s. US President Jimmy Carter made a great contribution to the first peace agreement between Israel and an Arab nation — the 1979 peace treaty with Egypt. But the initial step was taken by Egyptian President Anwar Sadat, followed by Israeli Prime Minister Menachem Begin. The 1993 Israeli-Palestinian Oslo Accord and the peace pact with Jordan a year later were achieved under the auspices of President Bill Clinton. His administration invested billions of dollars on maintenance of the Palestinian Authority created by the Oslo Accord and the training and equipping of its security forces. But the dead end of the Israeli-Palestinian negotiations following the 1991 Middle East peace conference in Madrid, which led to the 1993 Accord, was actually broken through in Oslo by representatives of the Yitzhak Rabin government and those of Yasser Arafat’s PLO.

Since the second intifada (2000-2005), the influence of the ideological Israeli right and of Israel’s real estate interests in the West Bank have overcome the influence of the United States and of Israel’s economic and diplomatic interests in Europe. The damage wrought by Palestinian terror attacks against Israelis and the firing of Palestinian rockets from the Gaza Strip into Israel has been far greater and more tangible than hopes of a secure and prosperous peace with the Palestinians. In his visit to the region, Trump tried to move along the 2002 Arab Peace Initiative, which offers Israel normal relations with the Arab states in return for a withdrawal from the areas it captured in the 1967 Six-Day War (with some land adjustments in the West Bank and East Jerusalem; the fate of the Golan Heights has been shelved for now, given the Syrian civil war), and a negotiated and just solution to the Palestinian refugee problem based on United Nations Resolution 194.

Standing at Trump’s side on May 22 in Jerusalem, Netanyahu remarked that “common dangers are turning former enemies into partners.” The prime minister said that the Arab leaders whom Trump met in Riyadh before flying to Israel could generate conditions for a realistic peace. He is absolutely right. Only the friends from the Gulf states can present the Israelis with an offer they cannot refuse. In a rare article penned by Sheikh Salman bin Hamad Al Khalifa, published eight years ago in The Washington Post, Bahrain’s crown prince urged Arab leadership to appeal directly to Israelis’ hearts in order to persuade them that not every Muslim wants to throw them into the sea. He added that the interests of the Gulf states in ending the Israeli-Palestinian conflict requires that they extricate Israel from its fortress mentality.

Greeting Trump as he landed at Ben Gurion Airport, Netanyahu said, “You just flew from Riyadh to Tel Aviv. I hope that one day an Israeli prime minister will be able to fly from Tel Aviv to Riyadh.” Why just the prime minister? Every Israeli would gladly watch a Saudi sword dance performance rather than keep hearing from their prime minister and others that the people of Israel shall forever live by their sword. By the same token, Israelis understand that they will not get any closer to that goal if their government keeps deepening the occupation of Palestinian territory by increasing construction starts in Israeli settlements by 34% over the past year (as reported by Peace Now), mostly in isolated settlements (rather than in settlement blocs).

Indeed, as Trump stated at his religious-style farewell speech at the Israel Museum, "Change must come from within." But this change must include also the Israeli ministers who hailed the speech. Apparently, Trump failed to understand that the only feasible deal in the region is territories in exchange for peace. As Abbas made it clear to him, religion has no role in these negotiations. Sermonizing the Arab-Muslim world and ignoring Israeli-Jewish occupation are turning a conflict over respecting human beings, their lands, their safety and their freedom into a religious war. God help us.